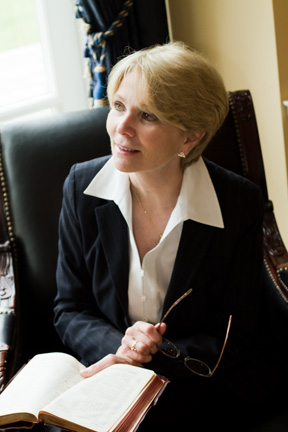 Sheila Liaugminas [log-meen-us] is an Emmy award-winning Chicago journalist with extensive experience in both secular and religious journalism. Her writing and broadcasting covers matters of the Church, faith, culture, politics and the media. For more than twenty years she reported for Time magazine out of the Midwest Bureau in Chicago -- and at WMAQ-TV, Chicago's NBC-owned station, she was co-host of the program 'YOU'. She has hosted three radio programs, “The Right Questions” and “Issues & Answers” for Relevant Radio, and "America's Lifeline" on the Salem network.

Sheila currently is the Host of "A Closer Look", an hour long news analysis program on Relevant Radio and serves as the Network News Director. She can be heard reading the Sunday Gospel and doing narratives on www.H2oNews.org in the English edition. She has been published in the Chicago Tribune, Crisis Magazine, National Catholic Register, Catholic New World, MercatorNet and the National Review Online.

She is married with two sons. Her son Fr. Andrew, received his STL in May 2011 and now serves as an associate in a parish in the Archdiocese of Chicago. Her other son is a writer in graduate school.

Sheila Liaugminas, well known to WFF readers as regular contributor to Voices and a member of its editorial board, will expand her news commentary program on Relevant Radio, a listener-supported Catholic radio network located in Green Bay, Wisconsin - http://www.relevantradio.com/.

The show “A Closer Look” will become a one hour interview program on weekdays from 5-6 p.m. CST and will premier April 4. Mrs. Liaugminas will focus on the Catholic perspective on current events, along with scholars, clergy, media specialists, elected officials and other experts.

“At the center of every story, about every topic and issue is the human person,” Mrs. Liaugminas, said in a March 9 announcement. “I'm eager to engage the debate of the day with great guests from these fields of discipline in the news, and draw the focus back to the dignity of the human person at the center of it all.”

“In a cultural climate of confusion and scorn, I'm eager to engage the issues of the day with clarity and charity”, she said.

God in the Public Square — Michaelmas 2011

Our Need to Worship - Eastertide 2011

Alter Christus: In a family of cradle Catholics, the reality of the priesthood has come home. -- Christmastide 2010

“A Glorious Opportunity” - Time for Voices of Clarity -- Michalemas 2009

What We Need Is New Order in the World -- Eastertide 2009

Father Speaks to the Family -- Pentecost 2008

The State of the Union of Faith and Politics -- Eastertide 2008

A Choice Battle, Heavyweights in the Heartland Wield New Strategy -- "How did the quiet, sparsely populated, Midwestern Plain state of South Dakota become the frontline of the pro-life movement?" -- by Sheila Liaugminas, Michaelmas 2006

Carrying the Message -"Jesus Christ "makes all things new again". "Re-launching" evangelization, as the Holy Father has put it, must draw new ardor and expression from a personal encounter with Christ." - by Sheila Gribben Liaugminas Pentecost Season 2004 -Vol. XIX: No. 2

The Passion for Christ - Facing Jesus Christ, in the awesomely complex simplicity of who He is, can be terrifying and shattering. Why? Because when you face Him, it is a decisive moment. And when you really encounter Him, you can never be the same.
by Sheila Gribben Liaugminas Eastertide 2004 Vol XIX, No. 1

Looking Forward - No matter how bleak current affairs are in the world, our culture, the government, the courts, the schools, the Christian faith and the Catholic Church -- and we do seem to be about one tick away from midnight on that doomsday clock -- how we see the overall picture of our condition in this civilization at this time depends on where we are looking. Or more specifically, on who is presenting the picture, what they're showing you, and how they are interpreting it for you.
by Sheila Gribben Liaugminas -- Christmastide 2003 - Epiphany 2004 - Vol . XVIII, No. 4

What Yield the Deposit of Faith? - Perspectives of Catechetics Lent/Easter 2002 Vol. XVII, No. 1

Below is Sheila Gribben Liaugminas's letter to the editor of The Daily Herald, "Suburban Chicago's Information Source", written "to set the record straight about the local abortion clinic where many of us hold prayer vigil. They had earlier printed an angry and nasty letter from a clinic worker responding to a very decent letter by an Illinois Citizens for Life Leader (one of our clinic vigil organizers), and the clinic worker's letter was all distortions and emotion. So I wrote back to clarify it, but ... didn't know if they'd publish it. Just found out it ran on Thanksgiving day. Thanks be to God."

Don't distort what is happening at clinic

Manipulate words and you manipulate reactions to what you are describing. That is why the media have such a responsibility to speak and write honestly, with words representing truth. That extends to anyone who speaks or writes to convey accounts of events for people who were not there.

I have been at the Glen Ellyn abortion clinic, to which letter writer Amy Tauchman of Glen Ellyn referred in her letter "Demonstrators should demonstrate sensitivity" (Oct. 26). So I feel a responsibility to address the distortion that account presented of what really takes place there, at least in the times I have been present.

It is important that each side tries to respect each other and operate on the premise that everyone is out there doing what they think to be the right thing. That is why people who stand outside the parameters of the clinic want to be able to just talk with the clinic workers and the patients who go there. Information is good, as is an understanding of all the facts. Many women who go for abortions actually feel they don't have a choice, contrary to the common image. The people outside the clinic have literature filled with resources and information for women in every sort of need, medically and beyond, because it is an effort to care for women and the life they carry within.

Trouble is, that clinic has a restraining order keeping those outside from coming onto any of the property, even the grass at the outer edge, just to say something, whether to patients or to the clinic workers themselves. So any communication, regrettably, has to be projected for people to hear it.

Tauchman claims that "protesters verbally harass and intimidate the patients as they arrive." Actually, they call out, asking them to take the reading material in their hands. They call out that there is plenty of help available to them and offer to provide it for them, offering them another choice. Why would anyone want to stand out in the bitter cold, wind and rain, sometimes for hours, getting practically numb, just to harass women as they come to a clinic? Intellectual honesty would acknowledge otherwise.

The people outside are people of all faiths, and no faith but strong convictions. And as for why the people outside spend "countless mornings" at the clinic, either praying, holding literature or just holding vigil instead of becoming foster or adoptive parents, I have a couple of answers.
First, some of those people are adoptive parents or assist with adoptions, and some do volunteer work at orphanages.

And second, if I knew you were out in middle of the forest behind some thick bushes, and I also knew the hunter nearby saw some rustling and, since he couldn't really see it was a human, and therefore wasn't certain it was a human, and didn't want to believe it was a human, I'd sure be out there beating the bushes to save you before he fired the shot.