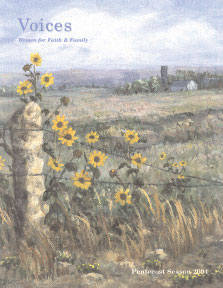 14 ...Voices Young Writer Award
A Life Lived with Faith and Reason - "Thomas More spent his life unifying faith and reason, and his death was a testimony to this fact" -- by Anna Maria Mendell

20...Bioethics Watch
Theory and Consequences -The Case against Premature Induction Deliveries of Babies with Anencephaly and Other "Anomalies Incompatible with Life -- by Nancy Valko, RN

7 - 13... Catholics and Political Responsibility Resource - "In 2004, a presidential election year in the United States, an issue that surfaced early on is the responsibility of Catholic politicians, Catholic voters, and bishops to support Church teaching." - by Helen Hull Hitchcock

3... Helping Parents Teach God's Plan for Human Love in a Sexualized Culture - "To overcome the culture of death, we need to teach and model to the next generation what the culture of life looks like." - by Onalee McGraw

17... Role-Modeling Chastity - "Our children do listen, though most often it is not to our words but to the tune of our actions." by Wendy Kennedy

29... Carrying the Message - "Jesus Christ "makes all things new again". "Re-launching" evangelization, as the Holy Father has put it, must draw new ardor and expression from a personal encounter with Christ." -- by Sheila Gribben Liaugminas

32... Cut the Clichés, See the Real Picture - "Ditch the slogans about race and sex, concentrate on Catholic truth, and join the great task of evangelization for this 21st century -- that is the way forward already adopted by the JPII-generation of younger Catholics." - by Joanna Bogle

Saint Monica, patroness of married women and of Christian mothers, was born in 331 in Tagaste, North Africa. Her errant son Augustine lost his Christian faith while away at school, and became deeply involved in the "new age" movement of his time, Manicheism. Monica's fidelity and persistence in prayer eventually led to his conversion when he was thirty-three. Soon after, this, she died in Ostia (near Rome) in 387. As Bishop of Hippo (in Africa), Augustine devoted himself to preaching and writing in defense of the Catholic faith, and is one of the greatest doctors of the Church. He died in 430, and his feast is August 28.

God of mercy,
comforter of those in sorrow,
the tears of Saint Monica moved you
to convert her son Saint Augustine
to the faith of Christ.
By their prayers, help us to turn from our sins
and to find your loving forgiveness.
Grant this through our Lord Jesus Christ, your Son,
Who lives and reigns with you in the unity of the Holy Spirit, one God forever and ever. + Amen