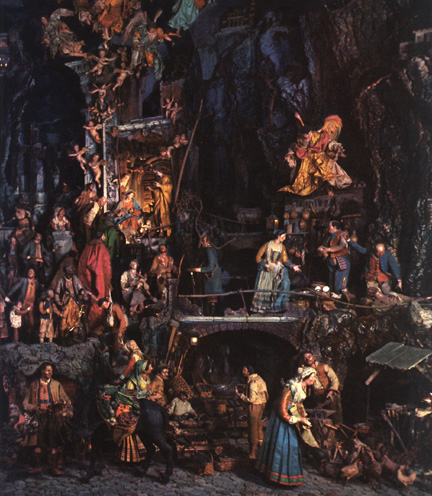 18th century Presepio built for King Charles III of Naples
(To view the Holy Family and more information, click on Holy Family above)

To set up the crib at home can be a simple but effective way of presenting the faith and transmitting it to one's children. The manger helps us to contemplate the mystery of God’s love who revealed himself in the poverty and simplicity of the Bethlehem cave.

Saint Francis of Assisi was so overwhelmed by the mystery of the Incarnation, that he wanted to present it again in Greccio with the living manger, thus becoming the initiator of a long popular tradition which still keeps its value for evangelization today.

The crib can help us, in fact, to understand the secret of the true Christmas, because it speaks of humility and the merciful goodness of Christ, who “though He was rich, yet for your sake He became poor”. (II Corinthians 8:9)  His poverty enriches those who embrace it and Christmas brings joy and peace to those who, as the shepherds, accept in Bethlehem the words of the angel: “And this will be a sign for you: you will find an infant wrapped in swaddling clothes and lying in a manger". (Luke 2:12)

It continues to be a sign also for us, men and women of the 21st century. There is no other Christmas.

Prayer for Blessing an Image of Infant Jesus

On Gaudete Sunday, December 14, 2008, Pope Benedict XVI said, "Standing before the crèche, we will be able to taste Christian joy, contemplating in the new-born Jesus the face of God who out of love made himself close to us". Then, addressing the Roman boys and girls who had come with figures of the Christ Child to be placed in nativity scenes in their homes, Pope Benedict invited them to join him in reciting the following prayer:

God, our Father, you so loved us even to the point of sending us your only son Jesus, born of the Virgin Mary, to save us and bring us to you. We ask that you bless these images of Jesus, who will soon come among us, as a sign of your presence and of your love in our homes.
Good Father, bless us as well, and our parents, our families, and our friends. Open our hearts so that we might know how to receive Jesus with joy, doing always what he asks, and seeing him in all those who are in need of our love. We ask you in the name of Jesus, your beloved Son, who came to bring peace to the world. He lives and reigns with you forever and ever. Amen.

The Origin of the Christmas Crib

The origin of the Christmas Crib (or Manger or Nativity scene - or French, crêche; Italian presepio; German krippe; Spanish, nacimiento) is often first ascribed to Saint Francis of Assisi, who in 1223 celebrated the Feast of the Nativity in a new way that led to a new devotional practice. Saint Francis sent for his friend, Giovanni Vellita, a landowner in Greccio where Francis had a favorite hermitage. "If now it seems good to thee that we should celebrate this feast together, go before me to Greccio and prepare everything as I tell thee. I desire to represent the birth of that Child in Bethlehem in such a way that with our bodily eyes we may see what He Suffered for lack of the necessities of a newborn babe and how He lay in a manger between the ox and ass."

Saint Bonaventure, Francis's biographer, said of the scene, "Many brothers and good people came at Francis's bidding, and during the night the weather also was beautiful. Many lights were kindled, songs and hymns were sung with great solemnity so that the whole wood echoed with the sound , and the man of God stood by the manger, filled with the utmost joy, and shedding tears of devotion and compassion. By his order the manger had been so arranged that Mass was celebrated on it, and blessed Francis...sang the gospel and preached to the people on the Nativity of Christ our King, and whenever he pronounced his name with infinite tenderness he called Him the 'little Babe of Bethlehem.'" (Nesta Robeck, The Christmas Crib, Milwaukee: Bruce Publishing Company, 1956, p. 45-47.)

In the liturgical drama known as the Officium Pastorum, which took shape in the 11th century, we find a praesepe behind the altar as the center of the action. But long before this, something similar seems to have been in existence in the church of Santa Maria Maggiore in Rome. Here Pope Gregory III (731-741) placed a "golden image of the Mother of God embracing God our savior in various gems." The Church was meant to provide a special home for the new festival of Christmas introduced by Pope Liberius (352-366). An important part of the early Christmas ritual was the celebration of Mass over a "manger" in which the consecrated host was laid, just as the body of the Holy Child had lain in the manger at Bethlehem.


The Crêche in the Home
In the 16th century the crêche scene was no longer confined to the churches. It still remains common in the Catholic regions of Europe to arrange the krippe underneath the Christmas tree.

Setting up the manger figures is a favorite family activity. Children like to arrange the figures of Mary and Joseph in the stable, and the shepherds, animals and other figures who are moved closer to the stable each day in anticipation of the arrival of the Christ Child. In many families, the figure of the Baby Jesus remains hidden until Christmas morning, when the children "discover" Him in the manger. It is also a custom to have the figures of the wise men begin their approach towards Bethlehem on Christmas Day after the star has appeared, to arrive at the stable on the Epiphany.

The animals traditionally part of every Nativity scene, usually an ass and an ox, are not mentioned in the New Testament. However, as early as the 4th century these animals were represented in pictures of the Nativity. The tradition originates in two Old Testament passages foretelling the birth of Christ: Isaiah 1:3 --"The ox knoweth his owner, and the ass his master's crib, but Israel hath not understood"; and Habakkuk 3:2 -- "In the midst of two animals Thou shalt become known."

Preparing the Manger for the Christ Child
Another custom that evolved from the Christmas Crib is the Preparation for the Manger--a practice of having children prepare a soft bedding for the manger. The custom originated in France but spread to Germany and other European countries. Each night a child may place a straw in the manger for each act of devotion or virtue performed throughout the day. When the Christ Child comes on Christmas Eve, He will find plenty of straw bedding to soften the hardness of the manger's boards.

Instead of using the tiny manger in the crêche scene, a larger manger might be made from a cardboard or wooden box. A separate manger could be made for each child, and placed beside his bed. If straw is not available, dried grass or thin strips of straw colored paper can be used.

The Custom of "Cribbing"
It is a challenge for Catholic families to celebrate all twelve days of Christmas while all around us the season is being taken down, boxed up, or put on sale at half price. If you live in a city, one way of keeping Christmas with children is to visit Jesus in the Mangers of other parishes. (The custom of Catholic families visiting the Cribs of many parishes on New Year's Day, although rapidly disappearing in the United States, is still evident in European cities.) Most churches have a beautiful display, and children will be impressed to see the care that each parish takes with its Nativity scene.


From the Directory on Popular Piety and the Liturgy

104. As is well known, in addition to the representations of the crib found in churches since antiquity, the custom of building cribs in the home was widely promoted from the thirteenth century, influenced undoubtedly by St. Francis of Assisi's crib in Greccio. Their preparation, in which children play a significant role, is an occasion for the members of the family to come into contact with the mystery of Christmas, as they gather for a moment of prayer or to read the biblical accounts of the Lord's birth.