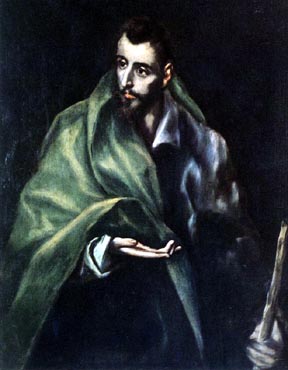 Collect:
Almighty ever-living God,
who consecrated the first fruits of your Apostles
by the blood of Saint James,
grant, we pray,
that your Church may be strengthened by his confession of faith
and constantly sustained by his protection.
Through our Lord Jesus Christ, your Son,
who lives and reigns with you in the unity of the Holy Spirit,
one God, for ever and ever. +Amen.

First Reading: 2 Corinthians 4: 7-15
But we have this treasure in earthen vessels, to show that the transcendent power belongs to God and not to us. We are afflicted in every way, but not crushed; perplexed, but not driven to despair; persecuted, but not forsaken; struck down, but not destroyed; always carrying in the body the death of Jesus, so that the life of Jesus may also be manifested in our bodies. For while we live we are always being given up to death for Jesus' sake, so that the life of Jesus may be manifested in our mortal flesh. So death is at work in us, but life in you.

Since we have the same spirit of faith as he had who wrote, "I believed, and so I spoke," we too believe, and so we speak, knowing that he who raised the Lord Jesus will raise us also with Jesus and bring us with you into his presence. For it is all for your sake, so that as grace extends to more and more people it may increase thanksgiving, to the glory of God.

Gospel Reading: Matthew 20:20-28
Then the mother of the sons of Zebedee came up to him, with her sons, and kneeling before him she asked him for something. And he said to her, "What do you want?" She said to him, "Command that these two sons of mine may sit, one at your right hand and one at your left, in your kingdom." But Jesus answered, "You do not know what you are asking. Are you able to drink the cup that I am to drink?" They said to him, "We are able." He said to them, "You will drink my cup, but to sit at my right hand and at my left is not mine to grant, but it is for those for whom it has been prepared by my Father."

And when the ten heard it, they were indignant at the two brothers. But Jesus called them to him and said, "You know that the rulers of the Gentiles lord it over them, and their great men exercise authority over them. It shall not be so among you; but whoever would be great among you must be your servant, and whoever would be first among you must be your slave; even as the Son of man came not to be served but to serve, and to give his life as a ransom for many."

Family Activity - from A Continual Feast by Evelyn Birge Vitz, originally published by Harper & Row in 1995, now available in paperback from Ignatius Press.

Saint James is known to have died around A.D. 42, by he sword, at the command of Herod Agrippa. According to legend, he first spent seven years in Spain, traveling throughout the land and preaching Christianity. After he was put to death, his followers are said to have brought his body back to Spain for burial. In the ninth century, a star miraculously revealed what was claimed to be his tomb. A great shrine was build at Compostela ("Star of the Sea"), and by the eleventh century great flocks of pilgrims were visiting it. From then on, only Jerusalem and Rome attracted more pilgrims than "Santiago" (Iago is Spanish for James).

The festival in his honor in Compostela is a week-long affair, celebrated with dramatic liturgy and with beautiful local costumes, Galician bagpipe music, dancing, and of course wonderful, special food.

One of the traditional dishes is a scallop-filled empanada, or little pie. Nothing could be more appropriate, for the scallop shell has been, for hundreds of years, the symbol of Santiago. This shell was worn as an emblem by all pilgrims to the shrine at Compostella. (In French, scallops are called "St. James cockles": coquilles St. Jacques.)

Let's put these tasty little creatures back on their symbolic shells. This dish is lovely with rice and a green vegetable, and a good white wine.

Scallops on the "pilgrim" shell

A few minutes (better yet, an hour) before beginning to cook, put the herbs to steep in the wine.

Rinse the scallops, and dry them. If using large sea scallops, cut them into halves or quarters. Coat them with flour that has been seasoned with salt and white pepper. Shake off excess flour before cooking.

Pour the herb-steeped wine into the frying pan, boiling the liquid down slightly, and stirring in all the delicious little bits left in the pan.

Stir the wine into the scallops. Taste for seasoning.

Fill the scallop shells with the mixture. Sprinkle with breadcrumbs and moisten the tops with a little melted butter. Run briefly under a preheated broiler to brown the crumbs.