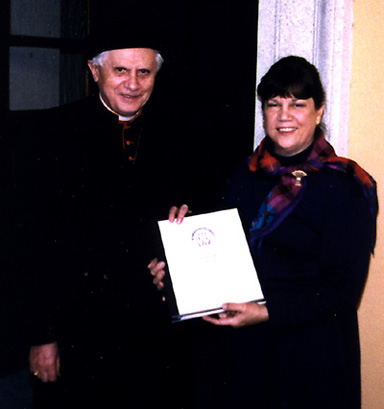 Cardinal Joseph Ratzinger received the names of more than 2000 Catholic women who are recent signers of the Affirmation for Catholic Women from Helen Hull Hitchcock, director of Women for Faith & Family [WFF] on January 20, 1999.

Cardinal Ratzinger, prefect of the Congregation for the Doctrine of the Faith, accepted the list on behalf of the Holy See in the courtyard of his office at the Vatican, along with a copy of WFF's Family Sourcebook on Lent and Easter (no longer in print).

Mrs. Hitchcock was in Rome for meetings, which included a papal audience on January 14, 2002, a meeting with Cardinal Augustin Mayer on January 12, and other Vatican officials.

WFF has gathered more than 50,000 signatures to the Affirmation for Catholic Women, an eight-point statement expressing support for Church teachings on abortion, ordination, family life, religious life and education, since WFF was organized in September 1984.

The presentation to Cardinal Ratzinger was the fourth occasion that the Affirmation signatures have been given in Rome.

In June 1985, the first list of 10,000 names was received by Pope John Paul II. During the Synod on the Laity in 1987, Cardinal Edouard Gagnon, then head of the Pontifical Council on the Family, received a list of 40,000 women's names on behalf of the Vatican at a news conference. In October 1994, an updated list of names from women in the US, Canada, Australia, England, Holland and other countries was presented to the Holy Father at a private audience. Other lists have been sent to the US bishops.

Signers of the Affirmation are Catholic women of all ages, all states in life, all educational and economic levels. About 10% are women religious, including the late Mother Teresa of Calcutta and Mother Angelica of Eternal Word Television Network, and their respective communities.

"What we have in common is the Catholic faith and a sense of responsibility for it", said Mrs. Hitchcock. "Especially since so many attacks on Church teaching are committed in the name of 'justice' to women, and since we are women who love Jesus Christ and His Church, we think it is essential that we continue our effort to witness publicly to the Catholic faith", she said.

"We women should be willing to shoulder our fair share of the responsibility for the mission of the Church especially when conflict and dissent within the Church cause so much confusion.

"Our families and communities depend very much on the willingness of women to accept our role in the transmission of the faith with courage and wisdom", she said. "We believe Church leaders need to know of this strong support from women, and we hope they will be encouraged to receive fresh evidence of the widespread and continuing fidelity of so many Catholic women."