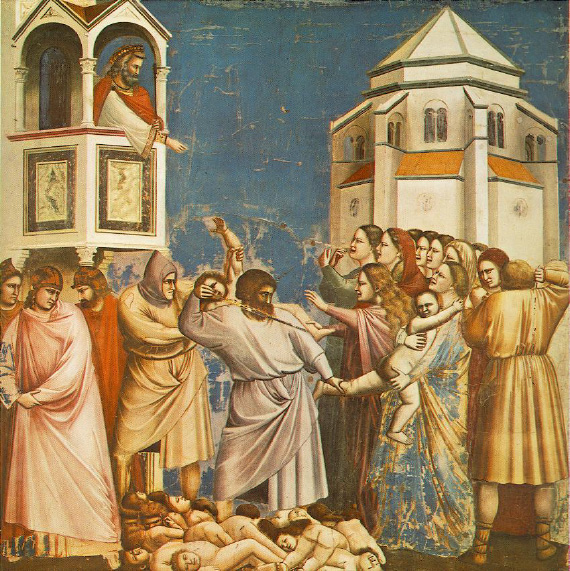 Giotto di Bondone
No. 21 Scenes from the Life of Christ
Massacre of the Innocents
1304-06 -- Fresco
Cappella Scrovegni (Arena Chapel), Padua

Collect:
O God, whom the Holy Innocents confessed
and proclaimed on this day,
not by speaking but by dying,
grant, we pray,
that the faith in you which we confess with our lips,
may also speak through our manner of life.
Through our Lord Jesus Christ, your Son,
who lives and reigns with you in the unity of the Holy Spirit,
one God, for ever and ever. +Amen.

Beloved; This is the message we have heard from Him [Jesus Christ], and proclaim to you, that God is light; and in Him is no darkness at all. If we say that we say that we have fellowship with Him while we walk in darkness, we lie and do not live according to the truth; but if we walk in the light, as He is in the light, we have fellowship with one another, and the blood of Jesus, His Son, cleanses us from all sin. If we say we have no sin in us, we deceive ourselves and the truth is not in us; but if we confess our sins, He is faithful and just, and will forgive our sins and cleanse us from all unrighteousness. If we say we have not sinned, we make Him a liar, and His word is not in us.

My little children, I am writing this to you so that you may not sin; but if any one does sin, we have an advocate with the Father, Jesus Christ the righteous; and He is the expiation for our sins, and not for ours only but also for the sins of the whole world.

If it had not been the LORD who was on our side,
when men rose up against us,
then they would have swallowed us up alive,
when their anger was kindled against us.

The snare is broken, and we have escaped!
Our help is in the name of the LORD,
who made heaven and earth.

Now when they had departed, behold, an angel of the Lord appeared to Joseph in a dream and said, "Rise, take the Child and His mother, and flee to Egypt, and remain there till I tell you: for Herod is about to search for the Child, to destroy Him." And he rose and took the Child and His mother by night, and departed to Egypt, and remained there until the death of Herod. This was to fulfill what the Lord had spoken by the prophet, "Out of Egypt have I called My Son."

Then Herod, when he saw that he had been tricked by the wise men, was in a furious rage, and he sent and killed all the male children in Bethlehem and in all that region who were two years old or under, according to the time which he had ascertained from the wise men. Then was fulfilled what was spoken by the prophet Jeremiah:

"A voice was heard in Ramah, wailing and loud lamentation: Rachel weeping for her children; she refused to be consoled because they were no more."

From the Directory on Popular Piety and the Liturgy

The Feast of the Holy Innocent

113. Since the sixth century, on December 28, the Church has celebrated the memory of those children killed because of Herod's rage against Christ (cf. Mt 2:16-17). Liturgical tradition refers to them as the "Holy Innocents" and regards them as martyrs. Throughout the centuries Christian art, poetry and popular piety have enfolded the memory of the "tender flock of lambs"(125) with sentiments of tenderness and sympathy. These sentiments are also accompanied by a note of indignation against the violence with which they were taken from their mothers' arms and killed.

In our own times, children suffer innumerable forms of violence which threaten their lives, dignity and right to education. On this day, it is appropriate to recall the vast host of children not yet born who have been killed under the cover of laws permitting abortion, which is an abominable crime. Mindful of these specific problems, popular piety in many places has inspired acts of worship as well as displays of charity which provide assistance to pregnant mothers, encourage adoption and the promotion of the education of children.

As recorded in the gospel of Matthew (below), after the visit of the Magi, Herod, in rage and jealousy, slaughtered all the baby boys in Bethlehem and surrounding countryside in an attempt to destroy his perceived rival, the infant Messiah. These "innocents" are honored by the Church as martyrs.

In countries where our own innocents are daily being slaughtered by abortion, this feast day is a special time to remember the unborn, to pray for their cause, and perhaps to picket or pray at facilities where unborn babies are killed through abortion.

This would be a good day to begin a Novena for the Unborn.(Click here for Spanish Version)

The collect for the Holy Innocents may be said just before the blessing of the evening meal (see Christmas mealtime blessings), or at night prayers.

The ancient Coventry Carol is a mournful lullaby to the Holy Innocents. The words are printed below.

Family observances of this feast day have traditionally included serving baby food (oatmeal or pureed fruits), especially to the youngest member of the family. Another custom is eating a light-colored pudding with a red strawberry or raspberry sauce as a reminder of the blood of the tiny infant martyrs. While some adults may find this rather gory, many children appreciate this symbolism without the squeamishness their parents may feel.

Parents may also want to begin a nightly blessing of their children. Simply trace the sign of the cross on their foreheads while saying "May God bless you in the name of the Father, and the Son and the Holy Spirit".

This beautiful English lullaby carol originated in the Coventry Corpus Christi Mystery Plays performed in the 15th century. In a play called The Pageant of the Shearmen and Tailors, the women of Bethlehem sing this song just before Herod's soldiers come to slaughter their children. It tells the story of the murder of the Holy Innocents, and is sung on December 28, the feast of those tiny martyrs.

O sisters, too, how may we do,
For to preserve this day;
This poor Youngling for whom we sing
Bye, bye lully, lullay

Herod the King, in his raging,
Charged he hath this day;
His men of might, in his own sight,
All young children to slay.

Then woe is me, poor child, for thee,
And ever mourn and say;
For thy parting neither say nor sing,
Bye, bye lully, lullay.

Theory and Consequences -The Case against Premature Induction Deliveries of Babies with Anencephaly and Other "Anomalies Incompatible with Life -- by Nancy Valko, RN (Vol. XIX, No. 2 Pentecost Season 2004)
For more pro-life articles

Go to Medical Morality or Go to Article Index

Novena for the Protection of the Unborn