Cupids. Candy. Flowers. Lacy hearts. Strange, isn't it, that the best known Christian saint on the secular calendar -- a holiday devoted to romantic love -- is a martyr for the Christian faith?

Saint Valentine did "die of love", to be sure -- but not of the romantic sort! Strange, also, considering its enormous popularity, that this saint's feast no longer appears on the Church's calendar. (Officially, February 14 marks the feast of Sts. Cyril and Methodias, 9th century missionaries to the Slavs.)

How did the "Saint" dissappear from Valentine's Day? Can we "re-Christianize" the celebration of this popular holiday? Who is Saint Valentine, anyway?

There are at three different Saint Valentines, all of them martyrs, mentioned in the early martyrologies for the date of February 14th.

One is described as a priest in Rome, another a bishop (of Interamna, the modern Terni). Both apparently were martyred in the second half of the third century and buried at different places on the Flaminian Way outside of Rome. The third St. Valentine was martyred in Africa with a number of companions.

Almost nothing is known about any of these early Christian men -- except that they died for the love of Christ!

The popular customs connected with Saint Valentine's Day's probably originated in medieval Europe. At that time, when "courtly love" was in flower, there was a common belief in England and France that on February 14th, precisely half way through the second month of the year, the birds began to pair.
Thus, we read in the 14th century English poet, Geoffrey Chaucer's "Parliament of Foules":

For this was on Seynt Valentynes' day
Whan every foul cometh ther to choose his mate. (Chaucer's original spelling).

This belief about "love-birds" is probably the reason Saint Valentine's feast day came to be seen as specially consecrated to lovers, and as a proper occasion for writing love letters and sending lover's tokens. The literature of the fourteenth and fifteenth-century in both France and England contain allusions to this practice.

This association with romantic love, along with the medieval revival of interest in classic literature, no doubt led to the "paganizing" of this martyr's feast, so that the Roman god, Cupid (the counterpart of Eros in Greek mythology), supplanted the saint in the celebration of the feast. In Roman mythology, Cupid, the son of Venus, was a winged immortal who had the mischievous habit of shooting invisible arrows into the hearts of mortals, which inflamed them with blind and helpless passion -- for the next person they might see.

The Golden Legend, a medieval book of stories about saints, says that Valentine, a priest, was imprisioned by the emperor Claudius II for leading people to Christ. While Valentine was being interrogated by a Roman officer, the priest preached Christ as the "one and only Light". The officer, who had a blind daughter, challenged Valentine to pray to Christ for her cure. The girl was cured, and the entire family were converted to Christianity.
According to legend, while awaiting execution, he wrote notes of instruction, affection and encouragement to the Christian community in Rome, which were secretly delivered by a boy who visited him in prison.

It is ironic that a Roman Christian who died defending the faith is now chiefly associated with a pagan god, Cupid!

On Saint Valentine's Day, we Christians have an opportunity for some real "inculturation" -- that is, planting seeds of Christ's truth into the culture in which we live.

When we remember that the heart of Saint Valentine was, like other Christian martyrs, "pierced" by the love of Our Lord, and he shed his blood for this, it seems appropriate that the red heart is a symbol for this powerful love. We think about the power of the love of God - our love for Him and His for us - to inspire our love for others. It is this kind of love that gives heart (or "en-courages") to faithful Christians to accomplish deeds of extraordinary courage - even unto death - to bring the truth of faith to others. We are reminded, too, that suffering that often accompanies genuine love.

In our Catholic families, we can focus our thoughts, this day, not only in expressing our love for our friends and families (and yes, sweethearts) by gifts and loving greetings; but also in prayer and meditation on Scripture.

A Prayer for Saint Valentine's Day

The following prayer is adapted from a collect (prayer) for feasts of martyrs.

Most Gracious Heavenly Father, You gave Saint Valentine the courage to witness to the gospel of Christ, even to the point of giving his life for it. Help us to endure all suffering for love of you, and to seek you with all our hearts; for you alone are the source of life and love. Grant that we may have the courage and love to be strong witnesses of your truth to our friends and family and to the whole world. We ask this through our Lord Jesus Christ, your Son, who lives and reigns with you and the Holy Spirit, one God, for ever and ever. Amen.

Prayer to St. Valentine
Almighty God, grant we beseech You,
that we who celebrate the glorious martyrdom of St. Valentine, Your servant, may by his intercession be filled with the love of God and neighbor and be delivered from all the evils that threaten us.

We ask this through Jesus Christ our Lord. Amen +

There are many passages of the Bible that reflect God's love. One of the best known of these is probably John 3:16:

For God so loved the world that he gave his only begotten Son, that whosoever believeth in Him should not perish, but have everlasting life.

During family prayers, or at dinner time, older children could read aloud the "love chapter" of Saint Paul's first letter to the Christian Church in Corinth, I Corinthians 13.

This would be a good time, too, to explain the three kinds of "love" in the Scripture (in English there is only one word for these three separate kinds of love, but Greek has a word for each one).

Why not start children on memorizing parts of Holy Scripture with John 3:16, which tells about God's immense love for us and our response to this love? One way to help with memorizing is to have them write out this verse on cut-out paper hearts -- for Valentines!

The color red is used by the Church as a symbol of the blood shed by martyrs who died for the faith. (You can point out that priests wear red vestments on feasts of martyrs.) Hearts, too, are symbols of deep Christian love. (The traditional devotion to the Sacred Heart of Jesus is an example.)

Young children may need help cutting out the hearts and printing the verse, but even very tiny ones can make original designs with crayon or markers.

In addition to construction paper, you might also supply some paper doilies, heart-shaped red foil stickers, markers or crayons, glitter glue, etc., red or gold ribbon, for a real assembly line of Valentine production. (We've found it's a good idea to start this project a few days before Valentine's day, to allow time to make enough for everyone - and to send to out-of-town grandparents and aunts and uncles.)

We can almost guarantee that teachers, parents and grandparents would be very, very pleased to receive a Valentine like this!

While you're overseeing the Valentine-making project, you can tell about the real saint, and about the great love he had for Christ and for other people.

If you have heart-shaped cake pans, you can make a very impressive big cake that will delight children. You can use any flavor cake-mix, and use a buttercream frosting or ready-made white icing. Cupcakes are another option -- especially as a treat to bring to school on Valentine's Day. The cake or cupcakes decorated with white or pink icing, adorned with candy sprinkles shaped like hearts (store-bought) or gum-drop hearts, heart-shaped red-hots, or red jelly beans. This is pretty, and simple enough that even toddlers can get into the spirit (and mess!) of it.

Store-bought sugar cookies or graham crackers can be decorated like this, too, if you're really short on time.

Of course, there's no substitute for real, home-made sugar cookies cut out with heart-shaped cutters. They can be frosted in different pastel colors (quickie hint: canned vanilla frosting divided into different bowls and colored with cake coloring).

Older children could use a tube of red icing to write "John 3:16" on each cookie - or "JOY" (which stands for "Jesus, Others, You"-- a Christian's order of priorities in loving). The cookies resemble those little candy hearts with cute sayings - only they have a real message of love. Kids can explain these "code messages" to their classmates. 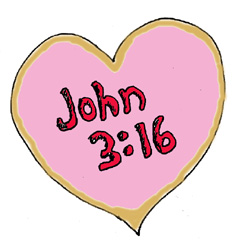 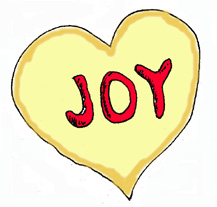 More ambitious, but interesting, is this recipe for "Love Knots", a recipe from Evelyn Birge Vitz's cookbook for feasts of the church year, A Continual Feast (Ignatius Press). In the late Middle Ages, she says, there was a custom of wearing "love knots" on Saint Valentines's Day - golden pins shaped like sideways figure-8s, a symbol of infinity, to suggest that love is without end, eternal. The love knots were made of gold, which never tarnishes, never loses it perfection, and were given to one's sweetheart.
This is a recipe for edible "love Knots", a sweet pretzel-like twist.

Cream the butter and sugar until fluffy. Beat in the egg yolk, the eggs, sour cream, vanilla extract and yellow food coloring (to make the dough more "golden"). Sift and stir in the flour; add the lemon rind.
Chill the dough for several hours and only remove it from the refrigerator a little at a time: this will make it easier to handle.
Preheat the oven to 375 degrees F.
Shape the dough into ropes about 1/2 inch in diameter and 12 inches long, and twist these into figure 8s. Place the twists on a greased baking sheet, and bake for about 15 minutes. About halfway through the cooking, "gild" with yellow sprinkles.
Yield: 12 to 14 "love knots".