The Transfiguration of the Lord
Feast Day
August 6th 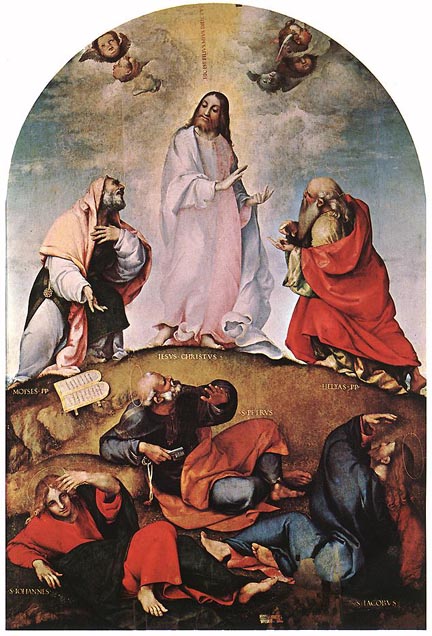 This feast became widespread in the West in the eleventh century and was introduced into the Roman calendar in 1457 to commemorate Christendom's victory over Islam in Belgrade in 1456. Before that, the Transfiguration of the Lord was already celebrated in the Syrian, Byzantine, and Coptic rites. The Transfiguration prefigures the glory of the Lord as God, foretells his ascension into heaven, and anticipates the glory of heaven, where we shall see God face to face. Through grace, we already share in the divine promise of eternal life.

Collect:
O God, who in the glorious Transfiguration
of your Only Begotten Son
confirmed the mysteries of faith by the witness of the Fathers
and wonderfully prefigured our full adoption to sonship,
grant, we pray, to your servants,
that, listening to the voices of your beloved Son,
we may merit to become co-heirs with him.
Who lives and reigns with you in the unity of the Holy Spirit,
one God, for ever and ever. +Amen.

First Reading:
Daniel 7:9-10, 13-14
As I looked, thrones were placed and one that was ancient of days took his seat; his raiment was white as snow, and the hair of his head like pure wool; his throne was fiery flames, its wheels were burning fire. A stream of fire issued and came forth from before him; a thousand thousands served him, and ten thousand times ten thousand stood before him; the court sat in judgment, and the books were opened. I saw in the night visions, and behold, with the clouds of heaven there came one like a son of man, and he came to the Ancient of Days and was presented before him. And to him was given dominion and glory and kingdom, that all peoples, nations, and languages should serve him; his dominion is an everlasting dominion, which shall not pass away, and his kingdom one that shall not be destroyed.

Second Reading:
2 Peter 1:16-19
For we did not follow cleverly devised myths when we made known to you the power and coming of our Lord Jesus Christ, but we were eyewitnesses of his majesty. For when he received honor and glory from God the Father and the voice was borne to him by the Majestic Glory, "This is my beloved Son, with whom I am well pleased," we heard this voice borne from heaven, for we were with him on the holy mountain. And we have the prophetic word made more sure. You will do well to pay attention to this as to a lamp shining in a dark place, until the day dawns and the morning star rises in your hearts.

Gospel Reading:
Gospel A - Matthew 17:1-9
And after six days Jesus took with him Peter and James and John his brother, and led them up a high mountain apart. And he was transfigured before them, and his face shone like the sun, and his garments became white as light. And behold, there appeared to them Moses and Elijah, talking with him. And Peter said to Jesus, "Lord, it is well that we are here; if you wish, I will make three booths here, one for you and one for Moses and one for Elijah." He was still speaking, when lo, a bright cloud overshadowed them, and a voice from the cloud said, "This is my beloved Son, with whom I am well pleased; listen to him." When the disciples heard this, they fell on their faces, and were filled with awe. But Jesus came and touched them, saying, "Rise, and have no fear."

Gospel B - Mark 9:2-10
And after six days Jesus took with him Peter and James and John, and led them up a high mountain apart by themselves; and he was transfigured before them, and his garments became glistening, intensely white, as no fuller on earth could bleach them. And there appeared to them Elijah with Moses; and they were talking to Jesus. And Peter said to Jesus, "Master, it is well that we are here; let us make three booths, one for you and one for Moses and one for Elijah." For he did not know what to say, for they were exceedingly afraid. And a cloud overshadowed them, and a voice came out of the cloud, "This is my beloved Son; listen to him." And suddenly looking around they no longer saw any one with them but Jesus only.

And as they were coming down the mountain, he charged them to tell no one what they had seen, until the Son of man should have risen from the dead. So they kept the matter to themselves, questioning what the rising from the dead meant.

Gospel C - Luke 9:28b-36
Now about eight days after these sayings he took with him Peter and John and James, and went up on the mountain to pray. And as he was praying, the appearance of his countenance was altered, and his raiment became dazzling white. And behold, two men talked with him, Moses and Elijah, who appeared in glory and spoke of his departure, which he was to accomplish at Jerusalem. Now Peter and those who were with him were heavy with sleep, and when they wakened they saw his glory and the two men who stood with him. And as the men were parting from him, Peter said to Jesus, "Master, it is well that we are here; let us make three booths, one for you and one for Moses and one for Elijah"--not knowing what he said. As he said this, a cloud came and overshadowed them; and they were afraid as they entered the cloud. And a voice came out of the cloud, saying, "This is my Son, my Chosen; listen to him!" And when the voice had spoken, Jesus was found alone. And they kept silence and told no one in those days anything of what they had seen.

A foretaste of the Kingdom: the Transfiguration

554 From the day Peter confessed that Jesus is the Christ, the Son of the living God, the Master "began to show his disciples that he must go to Jerusalem and suffer many things. . . and be killed, and on the third day be raised."290 Peter scorns this prediction, nor do the others understand it any better than he.291 In this context the mysterious episode of Jesus' Transfiguration takes place on a high mountain,292 before three witnesses chosen by himself: Peter, James and John. Jesus' face and clothes become dazzling with light, and Moses and Elijah appear, speaking "of his departure, which he was to accomplish at Jerusalem".293 A cloud covers him and a voice from heaven says: "This is my Son, my Chosen; listen to him!"294

555 For a moment Jesus discloses his divine glory, confirming Peter's confession. He also reveals that he will have to go by the way of the cross at Jerusalem in order to "enter into his glory".295 Moses and Elijah had seen God's glory on the Mountain; the Law and the Prophets had announced the Messiah's sufferings.296 Christ's Passion is the will of the Father: the Son acts as God's servant;297 the cloud indicates the presence of the Holy Spirit. "The whole Trinity appeared: the Father in the voice; the Son in the man; the Spirit in the shining cloud."298

You were transfigured on the mountain, and your disciples, as much as they were capable of it, beheld your glory, O Christ our God, so that when they should see you crucified they would understand that your Passion was voluntary, and proclaim to the world that you truly are the splendor of the Father.299

556 On the threshold of the public life: the baptism; on the threshold of the Passover: the Transfiguration. Jesus' baptism proclaimed "the mystery of the first regeneration", namely, our Baptism; the Transfiguration "is the sacrament of the second regeneration": our own Resurrection.300 From now on we share in the Lord's Resurrection through the Spirit who acts in the sacraments of the Body of Christ. The Transfiguration gives us a foretaste of Christ's glorious coming, when he "will change our lowly body to be like his glorious body."301 But it also recalls that "it is through many persecutions that we must enter the kingdom of God":302