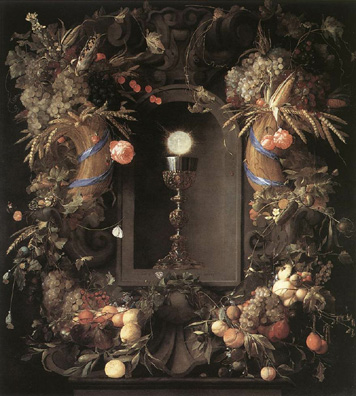 History from the 1913 edition of the Catholic Encyclopedia:

A civil holiday observed annually in the United States of America on the last Thursday in November. The president issues a proclamation, calling on the citizens, all Federal officials, and others subject to Federal authority to observe the day as one of national thanksgiving and prayer. The governors of states concur in the president's proclamation and also recommend the citizens to observe the holiday, and all public business is suspended.

The custom originated in 1621, when Governor Bradford of the Plymouth colony appointed a day for public praise and prayer after the first harvest, and the practice spread throughout the other New England colonies. The first national observance was when President Washington, at the request of Congress, recommended Thursday, November 26, 1789, to the people of the United States "as a day of public thanksgiving and prayer to be observed by acknowledging with grateful hearts the many and signal favours of Almighty God". This proclamation exhorted the people to "beseech Him to pardon our national and other transgressions, to promote the knowledge and practice of true religion and virtue, and to grant unto all mankind such a degree of temporal prosperity as He alone knows to be best". It was the first observation of the day on the date that present custom holds it.

In 1817 Thanksgiving Day was first officially noticed in New York State, and by 1859 its observance had spread to twenty-eight states and two territories. In 1863 President Lincoln made his first proclamation, naming the last Thursday of November as a day of national observance, which President Johnson also selected in 1867 and President Grant in 1870. Since then there has been no change, the last Thursday in November being named in each year's proclamation.

Catholic recognition of the day by special religious features has only been of comparatively recent date and not as yet (1911) of official general custom. Historians of the day attempt to trace the origin of Governor Bradford's idea (1621) back to the old Hebrew Feast of the Tabernacles and through the ages to the ancient Greek Harvest Feast, Thesmophoria, the Roman Cerealia, and the English Harvest Home. In the Dominion of Canada the governor-general by proclamation sets aside the last Monday in October as a legal holiday for the purpose of acknowledging God's providence and expressing the nation's dependence on His bounty.

Collect:
Father all-powerful,
your gifts of love are countless
and your goodness infinite;
as we come before you on Thanksgiving Day
with gratitude for your kindness,
open our hearts to have concern
for every man, woman, and child,
so that we may share your gifts in loving service.
Through our Lord Jesus Christ, your Son,
who livies and reigns with you in the unity of the Holy Spirit,
one God, for ever and ever. Amen.

Sirach 50:22-24
And now bless the God of all, who in every way does great things;
who exalts our days from birth, and deals with us according to His mercy.
May He give us gladness of heart, and grant that peace may be in our days in Israel, as in the days of old. May He entrust to us His mercy! And let Him deliver us in our days!

1 Corinthians 1:3-9
Grace to you and peace from God our Father and the Lord Jesus Christ.
I give thanks to God always for you because of the grace of God which was given you in Christ Jesus, that in every way you were enriched in Him with all speech and all knowledge -- even as the testimony to Christ was confirmed among you --
so that you are not lacking in any spiritual gift, as you wait for the revealing of our Lord Jesus Christ; who will sustain you to the end, guiltless in the day of our Lord Jesus Christ. God is faithful, by whom you were called into the fellowship of his Son, Jesus Christ our Lord.

Luke 17:11-19
On the way to Jerusalem Jesus was passing along between Samaria and Galilee. And as He entered a village, He was met by ten lepers, who stood at a distance and lifted up their voices and said, "Jesus, Master, have mercy on us." When He saw them He said to them, "Go and show yourselves to the priests." And as they went they were cleansed. Then one of them, when he saw that he was healed, turned back, praising God with a loud voice; and he fell on his face at Jesus' feet, giving Him thanks. Now he was a Samaritan. Then said Jesus, "Were not ten cleansed? Where are the nine? Was no one found to return and give praise to God except this foreigner?" And He said to him, "Rise and go your way; your faith has made you well."

Prayers of Thankgiving after Mass

Prayer for the Nation

John Carroll (1735-1815) the first Catholic bishop in America (1790), and in 1808 he became the first archbishop of Baltimore, Bishop Carroll wrote a prayer asking God's blessing on the president, Congress, and government of the United States for the first American diocesan synod, November 10, 1791, "for all the ranks of society and for the welfare of the Republic".

We pray Thee, O Almighty and Eternal God! Who through Jesus Christ hast revealed Thy glory to all nations, to preserve the works of Thy Mercy, that Thy Church, being spread through the whole world, may continue with unchanging faith in the confession of Thy Name.

We pray Thee, who alone art good and holy, to endow with heavenly knowledge, sincere zeal, and sanctity of life, our chief bishop, Pope [N.N.], the vicar of Our Lord Jesus Christ, in the government of His Church; our own bishop (or archbishop), [N.N.]; all other bishops, prelates, and pastors of the Church; and especially those who are appointed to exercise amongst us the functions of the holy ministry, and conduct Thy people into the ways of salvation.

We pray Thee, O God of might, wisdom, and justice! Through Whom authority is rightly administered, laws are enacted, and judgment decreed, assist with Thy holy spirit of counsel and fortitude the President of the United States, that his administration may be conducted in righteousness, and be eminently useful to Thy people over whom he presides; by encouraging due respect for virtue and religion; by a faithful execution of the laws in justice and mercy; and by restraining vice and immorality. Let the light of Thy divine wisdom direct the deliberations of Congress, and shine forth in all the proceedings and laws framed for our rule and government, so that they may tend to the preservation of peace, the promotion of national happiness, the increase of industry, sobriety, and useful knowledge; and may perpetuate to us the blessing of equal liberty.

We pray for his excellency, the Governor of this State, for the members of the Assembly, for all judges, magistrates, and other officers who are appointed to guard our political welfare, that they may be enabled, by Thy powerful protection, to discharge the duties of their respective stations with honesty and ability.

We recommend likewise, to Thy unbounded mercy, all our brethren and fellow citizens throughout the United States, that they may be blessed in the knowledge and sanctified in the observance of Thy most holy law; that they may be preserved in union, and in that peace which the world can not give; and after enjoying the blessings of this life, be admitted to those which are eternal.

Finally, we pray to Thee, O Lord of mercy, to remember the souls of Thy servants departed who are gone before us with the sign of faith and repose in the sleep of peace; the souls of our parents, relatives, and friends; of those who, when living, were members of this congregation, and particularly of such as are lately deceased; of all benefactors who, by their donations or legacies to this church, witnessed their zeal for the decency of divine worship and proved their claim to our grateful and charitable remembrance. To these, O Lord, and to all that rest in Christ, grant, we beseech Thee, a place of refreshment, light, and everlasting peace, through the same Jesus Christ, Our Lord and Savior. Amen

--Prayer for the Nation and the Civil Authorities
John Carroll of Baltimore, First Bishop of the United States
10 November 1791