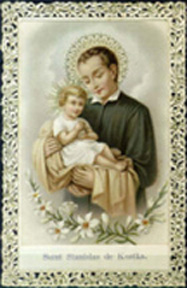 Lambert Zula, Bishop of Cracow, ordained him priest and made him pastor of Czembocz near Cracow, canon and preacher at the cathedral, and later, vicar-general. After the death of Lambert he was elected bishop, but accepted only on explicit command of Pope Alexander II. He worked with his wonted energy for his diocese, and inveighed against vices among high and low, regardless of consequences.

Boleslaw II had become King of Poland. the renown he had gained by his successful wars he now sullied by atrocious cruelty and unbridled lust. Moreover the bishop had several serious disputes with the king about a piece of land belonging to the Church which was unjustly claimed by Boleslaw, and about some nobles, who had left their homes to ward off various evils threatening their families and who were in consequence cruelly treated by the king. Stanislaus spared neither tears nor prayers and admonitions to bring the king to lead a more Christian life. All being in vain, Boleslaw was excommunicated and the canons of the cathedral were instructed to discontinue the Divine Offices in case the king should attempt to enter.

St. Stanislaus retired to the Chapel of St. Michael in a suburb of Cracow. The king was furious and followed the bishop with his guards, some of whom he sent to kill the saint. These dared not obey, so Boleslaw slew him during the Holy Sacrifice. The body was at first buried in the chapel, but in 1088 it was transferred to the cathedral by Bishop Lambert II. St. Stanislaus was canonized 1253 by Innocent IV at Assisi.

Collect:
O God, for whose honor the Bishop Saint Stanislaus
fell beneath the swords of his persecutors,
grant, we pray,
that we may persevere strong in faith even until death.
Through our Lord Jesus Christ, your Son,
who lives and reigns with you in the unity of the Holy Spirit,
one God, for ever and ever. +Amen

First Reading: Revelation 12:10-12a
And I, John, heard a loud voice in heaven, saying, "Now the salvation and the power and the kingdom of our God and the authority of His Christ have come, for the accuser of our brethren has been thrown down, who accuses them day and night before our God. And they have conquered him by the blood of the Lamb and by the word of their testimony, for they loved not their lives even unto death. Rejoice then, O heaven and you that dwell therein! But woe to you, O earth and sea, for the devil has come down to you in great wrath, because he knows that his time is short!"