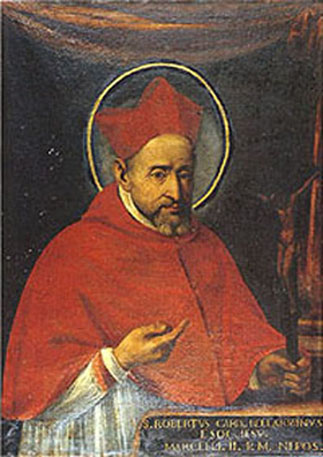 Collect:
O God, who adorned the Bishop Saint Robert Bellarmine
with wonderful learning and virtue
to vindicate the faith of your Church,
grant, through his intercession,
that in the integrity of that same faith
your people may always find joy.
Through our Lord Jesus Christ, your Son,
who lives and reigns with you in the unity of the Holy Spirit,
one God, for ever and ever. +Amen.

First Reading:Wisdom 7:7-10, 15-16
Therefore I prayed, and understanding was given me; I called upon God, and the spirit of wisdom came to me.

I preferred her to scepters and thrones, and I accounted wealth as nothing in comparison with her.

Neither did I liken to her any priceless gem, because all gold is but a little sand in her sight, and silver will be accounted as clay before her.

I loved her more than health and beauty, and I chose to have her rather than light,
because her radiance never ceases.

May God grant that I speak with judgment and have thought worthy of what I have received, for he is the guide even of wisdom and the corrector of the wise.

For both we and our words are in his hand, as are all understanding and skill in crafts.

And when Jesus finished these sayings, the crowds were astonished at his teaching, for he taught them as one who had authority, and not as their scribes.

Our catechesis today deals with Saint Robert Bellarmine, the great Jesuit theologian and Doctor of the Church. In the period following the Council of Trent, Saint Robert taught theology, first at Louvain and then in the Roman College. His most famous work, the Controversiae, sought to address the issues raised by Protestant theology from a serene historical and theological perspective, while his most popular work remained his brief catechism of Christian doctrine. He also served as spiritual father to the Jesuit students of the Roman College, including Saint Aloysius Gonzaga. Saint Robert was created Cardinal by Pope Clement VIII, and made Archbishop of Capua, where he spent three years in preaching and pastoral activity before being recalled to Rome and the service of the Holy See. In his later years, he composed a number of works of spirituality which reflect his deep Ignatian formation, with its stress on meditation on the mysteries of Christ and the loving imitation of the Lord. May the example of Saint Robert Bellarmine inspire us to integrate our work and our pursuit of Christian holiness, to grow in closeness to God through prayer, and to contribute to the Church’s renewal through our own inner conversion to the Lord and the truth of his word.