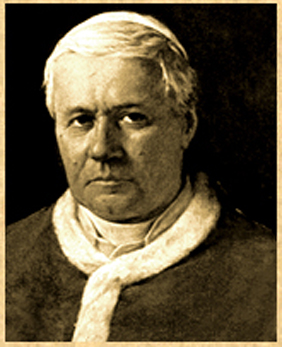 St. Pius X was born June2, 1835 in Venice. His parents were Giovanni Battista Sarto and Margarita (née Sanson); the former, a postman, died in 1852, but Margarita lived to see her son a cardinal. He was ordained in 1858, and for nine years was chaplain at Tombolo, having to assume most of the functions of parish priest, as the pastor was old and an invalid. He sought to prefect his knowledge of theology by assiduously studying Saint Thomas and canon law; at the same time he established a night school for adult students, and devoted himself of the ministry of preaching in other towns to which he was called. Became Pope in 1903.

In his first Encyclical, wishing to develop his program to some extent, he said that the motto of his pontificate would be "instaurare omnia in Christo"[Restore all things to Christ] from Ephesians 1:10).

He encouraged daily Holy Communion and that the first Communion of children should not be deferred too long after they had reached the age of discretion. It was by his desire that the Eucharistic Congress of 1905 was held at Rome, while he enhanced the solemnity of subsequent Eucharistic congresses by sending to them cardinal legates.

He was a promoter of sacred music; as pope, he published, November 22, 1903, a Motu Proprio on sacred music in churches, and at the same time ordered the authentic Gregorian Chant to be used everywhere, while he caused the choir books to be printed with the Vatican font of type under the supervision of a special commission. In the Encyclical "Acerbo nimis" (April 15, 1905) he treated of the necessity of catechismal instruction, not only for children, but also for adults, giving detailed rules, especially in relation to suitable schools for the religious instruction of students of the public schools, and even of the universities. He caused a new catechism to be published for the Diocese of Rome.

As bishop, his chief care had been for the formation of the clergy, and in harmony with this purpose, an Encyclical to the Italian episcopate (July 28, 1906) enjoined the greatest caution in the ordination of priests, calling the attention of the bishops to the fact that there was frequently manifested among the younger clergy a spirit of independence that was a menace to ecclesiastical discipline.

The pope has at heart above all things the purity of the faith. On various occasions, as in the Encyclical regarding the centenary of Saint Gregory the Great, Pius X had pointed out the dangers of certain new theological methods, which, based upon Agnosticism and upon Immanentism, necessarily divest the doctrine of the faith of its teachings of objective, absolute, and immutable truth, and all the more, when those methods are associated with subversive criticism of the Holy Scriptures and of the origins of Christianity. Wherefore, in 1907, he caused the publication of the Decree "Lamentabili" (called also the Syllabus of Pius X), in which sixty-five propositions are condemned. The greater number of these propositions concern the Holy Scriptures, their inspiration, and the doctrine of Jesus and of the Apostles, while others relate to dogma, the sacraments, and the primacy of the Bishop of Rome. Soon after that, on September 8 , 1907, there appeared the famous Encyclical "Pascendi", which expounds and condemns the system of Modernism.

Collect:
O God, who to safeguard the Catholic faith
and to restore all things in Christ,
filled Pope Saint Pius the Tenth
with heavenly wisdom and apostolic fortitude,
graciously grant
that, following his teaching and example,
we may gain an eternal prize.
Through our Lord Jesus Christ, your Son,
who lives and reigns with you in the unity of the Holy Spirit,
one God, for ever and ever. +Amen.

First Reading: 1 Thessalonians 2:2b-8
Though we had already suffered and been shamefully treated at Philippi, as you know, we had courage in our God to declare to you the gospel of God in the face of great opposition. For our appeal does not spring from error or uncleanness, nor is it made with guile; but just as we have been approved by God to be entrusted with the gospel, so we speak, not to please men, but to please God who tests our hearts. For we never used either words of flattery, as you know, or a cloak for greed, as God is witness; nor did we seek glory from men, whether from you or from others, though we might have made demands as apostles of Christ. But we were gentle among you, like a nurse taking care of her children. So, being affectionately desirous of you, we were ready to share with you not only the gospel of God but also our own selves, because you had become very dear to us.

Glorious Pope of the Eucharist, Saint Pius X, you sought "to restore all things in Christ." Obtain for me a true love of Jesus so that I may live only for Him. Help me to acquire a lively fervor and a sincere will to strive for sanctity of life, and that I may avail myself of the riches of the Holy Eucharist in sacrifice and sacrament. By your love for Mary, mother and queen of all, inflame my heart with tender devotion to her.

Blessed model of the priesthood, obtain for us holy, dedicated priests, and increase vocations to the religious life. Dispel confusion and hatred and anxiety, and incline our hearts to peace and concord. so that all nations will place themselves under the sweet reign of Christ. Amen.

Saint Pius X, pray for me