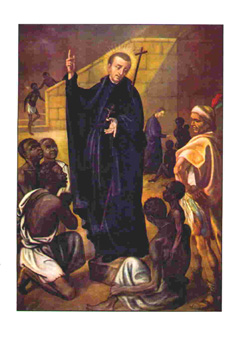 History:
The son of a Catalonian farmer, was born at Verdu, in 1581. He obtained his first degrees at the University of Barcelona. At the age of twenty he entered the Jesuit novitiate at Tarragona. While he was studying philosophy at Majorca in 1605, Alphonsus Rodriguez, the saintly door-keeper of the college, learned from God the future mission of his young associate, and thenceforth never ceased exhorting him to set out to evangelize the Spanish possessions in America. Peter obeyed, and in 1610 landed at Cartagena, where for forty-four years he was the Apostle of the slaves. Early in the seventeenth century the masters of Central and South America afforded the spectacle of one of those social crimes which are entered upon so lightly. They needed laborers to cultivate the soil which they had conquered and to exploit the gold mines. The natives being physically incapable of enduring the labors of the mines, it was determined to replace them with slaves brought from Africa. The coasts of Guinea, the Congo, and Angola became the market for slave dealers, to whom native petty kings sold their subjects and their prisoners. By its position in the Caribbean Sea, Cartagena became the chief slave-mart of the New World. A thousand slaves landed there each month. They were bought for two, and sold for 200 écus. Though half the cargo might die, the trade remained profitable. Neither the repeated censures of the pope, nor those of Catholic moralists could prevail against this cupidity. The missionaries could not suppress slavery, but only alleviate it, and no one worked more heroically than Peter Claver.

During his life he baptized and instructed in the Faith more than 300,000 slaves. He died September 8, 1654. He was beatified July 16, 1850, Pius IX, and canonized January 15, 1888, by Leo XIII. His feast is celebrated on the ninth of September. On July 7, 1896, he was proclaimed the special patron of all the Catholic missions especially missions to Blacks. Alphonsus Rodriguez was canonized on the same day as Peter Claver.

Collect:
O God, who made Saint Peter Claver a slave of slaves
and strenghtened him with wonderful charity and patience
as he came to their help,
grant, through his intercession,
that, seeking the things of Jesus Christ,
we may love our neighbor in deeds and in truth.
Through our Lord Jesus Christ, your Son,
who lives and reigns with you in the unity of the Holy Spirit,
one God, for ever and ever. +Amen.

[Readings for the day are from the Common of Pastors (missionaries)]

Lamb of God, who takes away the sins of the world
Spare us O Lord!

Lamb of God, who takes away the sins of the world
Graciously hear us O Lord!

Lamb of God, who takes away the sins of the world
Have mercy on us!

Lord, have mercy on us
Lord, hear our prayer.

O God, who to bring the poor to the knowledge of Thy most Holy Name,  you gave to thy priest, St. Peter Claver,  an admirable spirit of abnegation and heroic charity.   Grant us through his intercession,  not to seek our own satisfaction  but the glory of Thy Divine son,  that we may be able to love our neighbor in sincerity and truth,  through Christ our Lord.   Amen!

Ignatius Strecker came to America from Germany in 1853. He, his wife, and daughter settled in St. Joseph’s Parish in St. Louis, Missouri. He was a temperate, conscientious, religious man. Ignatius was devoted to his family, which eventually numbered nine children. He was also a hard worker in the soap factory where he found employment.

In this factory, one day towards the end of 1861, Mr. Strecker accidentally struck his chest sharply against a pointed piece of iron. His breastbone was injured, though no outward wound was at first visible. Still there was considerable pain, a burning sensation, and some swelling. This busy workman did not pay too much attention to his injury, until after two months. The tumor-like inflammation began to grow alarmingly and there was no way to drain off the accumulating malignant matter. Doctor Joseph Heitzig, the family physician, was called in.

Certain external remedies were tried and failed to cure him. Doctor Heitzig opened up the wound with an instrument, only to find the breastbone and some ribs on the left side in a state of incipient decomposition. A series of injections failed to clear this up, as did other remedies. The patient only grew worse. Moreover, violent coughing accompanied by copious sputum pointed to tuberculosis. Fever set in, respiration became difficult, and food could not be taken. Mr. Strecker was so weakened and fatigued that he had to give up his employment and spend weeks at a time as an invalid in bed.

After nine months of steady treatment without success, Doctor Heitzig asked the family to call in Doctor William Schoenemann, considered one of the best specialists in America. After a thorough examination of some futile attempts at healing, the doctor pronounced Mr. Strecker incurable and gave him two weeks to live. Mr. Strecker did not die, but lingered on for many months. He finally turned from human remedies to place himself, with resignation, in the hands of Divine Providence. He began to prepare for death.

At this critical moment, the famous parish missionary, Father Francis Xavier Weninger, S. J. arrived at St. Joseph’s to preach a mission. After the mission, Mrs. Strecker happened to be present in the church when Father Weninger was preaching a sermon on Blessed Peter Claver. Father Weninger pointed out Peter Claver’s great intercessory power with God. After the sermon, he blessed the people with a relic of Peter Claver.

Mrs. Strecker was a woman of deep faith. She went home and begged her husband to ask Peter Claver to cure his fatal maladies. Although Mr. Strecker had never heard of Peter Claver before this, he began to invoke him and ask for his help. The next day, with the last ounce of his strength, he literally dragged himself to St. Joseph’s Church and came in just as Father Weninger was blessing the sick with the relic. With sincere faith and strong confidence he placed himself in the line of the sick. Father Weninger blessed him and allowed him to kiss the relic.

What occurred now, Ignatius always found hard to explain. He said he felt a sudden increase in courage, a strengthening of faith, and an utter assurance that he would recover his health through the intercession of Peter Claver. The relic had no sooner been applied than the external suppurating sore began to disappear. The breastbone and ribs healed rapidly and the tuberculosis of the lungs vanished – all within a week or two. In fact, the day after the blessing with the relic, Mr. Strecker was back on the job in the factory. Despite great fatigue, he could already do a reasonable day’s work.

Dr. Schoenemann was astonished. Although not a Catholic, He declared that he recognized in the cure, a miracle of God’s omnipotence. The cure was complete. There was never any relapse. Years later, Mr. Strecker died on June 4, 1880 in St. Nicholas parish, adjoining St. Joseph’s. The City Board of Health issued a certificate that he died of typhoid fever and not as a consequence of his previous illnesses. Ignatius was buried in old SS. Peter and Paul Cemetery.

Two years after the cure, a thorough canonical investigation was made by the Most Reverend Michael O’Connor who was for many years Bishop of Pittsburgh but now a member of the Society of Jesus. The miracle was formally declared authentic in Rome by Cardinal Bianchi in 1887. This miracle was chosen as one of the required two for the canonization process of Peter Claver. He was canonized the following year and his feast is now celebrated in the universal church on September 9th.