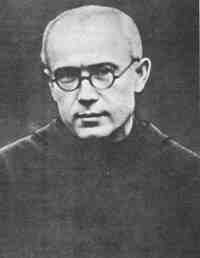 St. Maximillian was born in the Poland in 1894. He entered the novitiate of the Conventual Franciscans in 1910. In 1914 and three years later help organized the association The Militia of the Immaculate Virgin Mary. He was ordained in Rome in 1918. In 1922, he began publishing the magazine, "Knight of the Immaculate," first in Polish and then in other languages.

In 1927, he began building a whole town with property donated by a wealthy nobleman, called the "Town of the Immaculate," outside of Warsaw. There he began training people with vocations among the laity and prospective Religious and Priests, to become apostles of Mary. The first Marian Missionaries to Japan were trained in the "Town of the Immaculate." In 1930, Maximillian opened a Marian publication apostolate in Nagasaki, Japan one of the two cities in Japan which would later be ravaged by a nuclear bomb during the Second World War. As popes have been saying ever since, God chose His most faithful people as a sacrifice to insure future peace in the world.

In 1939, Maximillian was arrested by the Nazis who had taken over Poland and sent to Auschwitz. Two years later, in July of 1941, at Block Fourteen, where Saint Maximilian was being kept, revealed that a prisoner had escaped. The policy was to assemble all the prisoners from the block in the yard where they would stand at attention the whole day. If, by the end of the day, the escapee had not been recovered, ten others would be chosen at random to die in his place.

By three o'clock the prisoner was still not found. One of the ten chosen to die was Francis Gajowniczek. Mr. Gajowniczek cried out, "My poor wife, my poor children! What will happen to my family!" That is when Fr. Kolbe came forward, asked to exchange places with Gajowniczek and took the place of the condemned man.

Father Kolbe was sent to the starvation bunker. He lead those with him in prayer. After two weeks, he was still alive. On the morning of August 14, 1941 a lethal dose of carbolic acid was injected into him.

Collect:
O God, who filled the Priest and Martyr Saint Maximillian Kolbe
with a burning love for the Immaculate Virgin Mary
and with zeal for souls and love of neighbor,
graciously grant, through his intercession,
that, striving for your glory by eagerly serving others,
we may be conformed, even until death, to your Son.
Who lives and reigns with you in the unity of the Holy Spirit, one God, for ever and ever. +Amen.

First Reading: Wisdom 3:1-9
But the souls of the righteous are in the hand of God,
and no torment will ever touch them.
In the eyes of the foolish they seemed to have died,
and their departure was thought to be an affliction,
and their going from us to be their destruction;
but they are at peace.
For though in the sight of men they were punished,
their hope is full of immortality.
Having been disciplined a little,
they will receive great good,
because God tested them and found them worthy of Himself;
like gold in the furnace He tried them,
and like a sacrificial burnt offering He accepted them.
In the time of their visitation they will shine forth,
and will run like sparks through the stubble.
They will govern nations and rule over peoples,
and the Lord will reign over them for ever.
Those who trust in Him will understand truth,
and the faithful will abide with Him in love,
because grace and mercy are upon His elect,
and He watches over His holy ones.

Alternative First Reading 1John 3:14-18
We know that we have passed out of death into life, because we love the brethren. He who does not love abides in death. Any one who hates his brother is a murderer, and you know that no murderer has eternal life abiding in him. By this we know love, that He laid down His life for us; and we ought to lay down our lives for the brethren. But if any one has the world's goods and sees his brother in need, yet closes his heart against him, how does God's love abide in him? Little children, let us not love in word or speech but in deed and in truth.

Gospel Reading John 15:12-16
"This is my commandment, that you love one another as I have loved you. Greater love has no man than this, that a man lay down his life for his friends. You are my friends if you do what I command you. No longer do I call you servants, for the servant does not know what his master is doing; but I have called you friends, for all that I have heard from my Father I have made known to you. You did not choose me, but I chose you and appointed you that you should go and bear fruit and that your fruit should abide; so that whatever you ask the Father in my name, he may give it to you.

O Immaculata, Queen of Heaven and earth, refuge of sinners and our most loving Mother, God has willed to entrust the entire order of mercy to you. I, (name), a repentant sinner, cast myself at your feet, humbly imploring you to take me with all that I am and have, wholly to yourself as your possession and property. Please make of me, of all my powers of soul and body, of my whole life, death and eternity, whatever most pleases you.

If it pleases you, use all that I am and have without reserve, wholly to accomplish what was said of you: "She will crush your head," and "You alone have destroyed all heresies in the whole world." Let me be a fit instrument in your immaculate and merciful hands for introducing and increasing your glory to the maximum in all the many strayed and indifferent souls, and thus help extend as far as possible the blessed kingdom of the most Sacred Heart of Jesus. For wherever you enter you obtain the grace of conversion and growth in holiness, since it is through your hands that all graces come to us from the most Sacred Heart of Jesus.

V. Allow me to praise you, O Sacred Virgin
R. Give me strength against your enemies