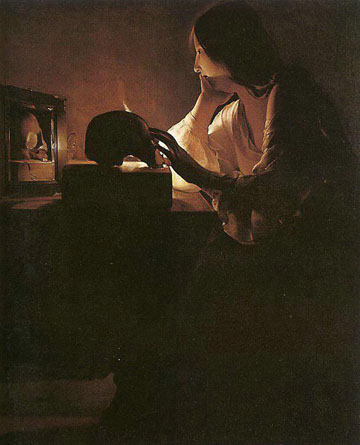 Collect:
O God, whose Only Begotten Son
entrusted Mary Magdalene before all others
with announcing the great joy of the Resurrection,
grant, we pray,
that through her intercession and example
we may proclaim the living Christ
and come to see him reigning in your glory.
Who lives and reigns with you in the unity of the Holy Spirit,
one God, for ever and ever. +Amen.

Gospel Reading: John 20: 1-2.11-18
It was very early on the first day of the week and still dark, when Mary of Magdala came to the tomb. She saw that the stone haed been moved away from the tomb and came running to Simon Peter and the other disciple, the one Jesus loved. "They have taken the Lord out of the tomb", she said, "and we don't know where they have put Him".

Meanwhile, Mary stayed outside near the tomb, weeping. Then, still weeping, she stooped to look inside, and saw two angels in white sitting where the body of Jesus had been, one at the head, the other at the feet. They said, "Woman, why are you weeping?" "They have taken my Lord away", she replied, "and I don't know where they have put Him". As she said this she turned round and saw Jesus standing there, though she did not recognize Him. Jesus said, "Woman, why are you weeping? Who are you looking for?" Supposing Him to be the gardener, she said, "Sir, if you have taken Him away, tell me where you have put Him, and I will go and remove Him". Jesus said, "Mary!" She knew Him then and said to Him in Hebrew, "Rabbuni!" -- which means Master. Jesus said to her, "Do not cling to me, because I have not yet ascended to the Father. But go and find the brothers, and tell them: I am ascending to my Father and to your Father, to my God and your God". So Mary of Magdala went and told the disciples that she had seen the Lord and that he had said these things to her.

Prayer
Praise be to Thee, O Christ, Creator, Redeemer, and Savior,
Of heaven and earth and seas, of angels and of men
Whom we confess to be both God and Man,
Who didst come in order to save sinners,
Thyself without sin, taking the appearance of sin.
Among this poor flock, Thou didst visit the Canaanite woman and
Mary Magdalen.

From the same table Thou didst nourish the one with the crumbs of
the Divine Word, the other with Thy inebriating cup.
While Thou art seated at the typical feast in the house of Simon
the Leper.

The Pharisee murmurs, while the woman weeps, conscious of her guilt.

The sinner despises his fellow-sinner, Thou, sinless one hearest
the prayer of the penitent, cleanses her from stains, lovest her
so as to make her beautiful.

Such, O Wisdom of the Father, is the banquet that delights Thee!
Though born of a Virgin, Thou cost not disdain to be touched by a
sinful woman.

The Pharisee invited Thee but it is Mary that gives Thee a feast.
Thou forgivest much to her that loves much, and that falls not
again into sin.

From seven devils cost Thou free her by Thy sevenfold Spirit.
To her, when Thou risest from the dead, Thou showest Thyself first
of all.

By her, O Christ. Thou cost designate the Gentile Church, the
stranger whom Thou callest to the children's table;

Thou knowest what manner of woman she is, it is because she is a
sinner that she touches Thee, and because she longs for pardon.
What could she have, poor sick one, without receiving it, and
without the physician assisting her?

O King of kings, rich unto all, save us, wash away all the stains
of our sins, O Thou the hope and glory of the saints.

RESPONSORY
Congratulate me, all ye that love the Lord; for He whom I sought
appeared to me: *and while I wept at the tomb I saw my Lord,
alleluia.

v. When the disciples withdrew, I did not withdraw, and being
kindled with the fire of His love, I burned with desire.

PRAYER
We beseech Thee, O Lord, that we may be helped by the intercession
of blessed Mary Magdalen, entreated by whose prayers Thou didst
raise up again to life her brother Lazarus, who had been dead four
days. Thou Who livest and reignest forever. Amen

About Saint Mary Magdalene
Of the earlier life of Saint Mary Magdalene we know only that she was "a woman who was a sinner". From the depth of her degradation she raised her eyes to Jesus with sorrow, hope, and love. Covered with shame, she came to where Jesus was at table, and knelt behind Him. She said not a word, but bathed His feet with her tears, wiped them with the hair of her head and kissed them with humility. Then she poured on them costly ointment. The divine lips of her Savior removed her reproach, spoke her absolution, and bade her go in peace. From that time on, she ministered to Jesus, sat at His feet, and listened to His words. She was one of the family of Bethany "whom Jesus so loved" that He raised her brother Lazarus from the dead.

It happened that once again, on the eve of His Passion, she brought precious ointment, and this time, as His purified and beloved follower, poured it on His head; and we may say that the entire House of God is still filled with the fragrance of her anointing. Mary Magdalene stood with Our Lady and Saint John at the foot of the cross, representative of the many who have loved much because much has been forgiven them.

To her, the first after His blessed Mother, and through her to His Apostles, Our Lord gave the certainty of His resurrection.