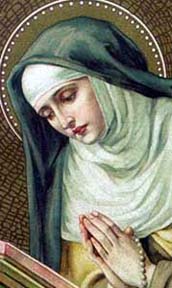 from a prayer card

Our prayer must be humble, fervent, resigned, persevering, and deeply reverent, for we must reflect that we are in the presence of a God and speaking with a Lord before Whom the Angels tremble out of respect and fear.

Saint Mary Magdalen de'Pazzi was born in Florence and joined the Carmelites when she was nineteen. She practiced great mortification for the salvation of sinners; her constant exclamation was, "To suffer, not to die!" With apostolic zeal, she urged the renewal of the entire ecclesiastical community.

Collect:
O God, lover of virginity,
who adorned with heavenly gifts
the Virgin Saint Mary Magdalene de'Pazzi,
setting her on fire with your love,
grant, we pray, that we, who honor her today,
may imitate her example of purity and love.
Through our Lord Jesus Christ, your Son,
who lives and reigns with you in the unity of the Holy Spirit,
one God, for ever and ever. +Amen.

LETTER OF HIS HOLINESS BENEDICT XVI TO THE ARCHBISHOP OF FLORENCE ON THE OCCASION OF THE FOURTH CENTENARY OF THE DEATH OF ST. MARY MAGDALENE DE’ PAZZI

To His Eminence
Cardinal Ennio Antonelli
Archbishop of Florence

On the occasion of the Fourth Centenary of the death of St Mary Magdalene de' Pazzi, I am pleased to unite myself to the beloved Florentine Church who wishes to remember her illustrious daughter, particularly dear as a symbolic figure of a living love that recalls the essential mystical dimension of every Christian life.
While with affection I greet you, Your Eminence, and the entire diocesan community, I give thanks to God for the gift of this Saint, which every generation rediscovers as uniquely close by knowing how to communicate an ardent love for Christ and the Church.

Born in Florence on 2 April 1566 and baptized at the "beautiful St John" font with the name Caterina, St Mary Magdalene de' Pazzi showed a particular sensitivity to the supernatural from childhood and was attracted by intimate colloquy with God.
As was the custom for children of noble families, her education was entrusted to the Dames of Malta, in whose monastery she received her First Holy Communion on 25 March 1576, and just some days later she consigned herself to the Lord for ever with a promise of virginity.

Returning to her family, she deepened her prayer life with the help of the Jesuit Fathers, who used to come to the palace. She cleverly did not allow herself to be conditioned by the worldly demands of an environment that, although Christian, was not sufficient to satisfy her desire to become more similar to her crucified Spouse.

In this context she reached the decision to leave the world and enter the Carmel of St Mary of the Angels at Borgo San Frediano, where on 30 January 1583 she received the Carmelite habit and the name of Sr Mary Magdalene.

In March of 1584, she fell gravely ill and asked to be able to make her profession prior to the time, and on 27 May, Feast of the Trinity, she was carried into the choir on her pallet, where she pronounced before the Lord her vows of chastity, poverty and obedience for ever.

From this moment an intense mystical season began which was also the source of the Saint's great ecstatic fame. The Carmelites of St Mary of the Angels have five manuscripts in which are recorded the extraordinary experiences of their young Sister.

"The Forty Days" of the summer of 1584 are followed by "The Colloquies" of the first half of the following year. The apex of the mystical knowledge that God granted of himself to Sr Mary Magdalene is found in "Revelations and Intelligences", eight days of splendid ecstacies from the vigil of Pentecost to the Feastday of the Trinity in 1585. This was an intense experience that made her able at only 19 years of age to span the whole mystery of salvation, from the Incarnation of the Word in the womb of Mary to the descent of the Holy Spirit on Pentecost.

Five long years of interior purification followed - Mary Magdalene de' Pazzi speaks of it in the book of "The Probation" - in which her Spouse, the Word, takes away the sentiment of grace and leaves her like Daniel in the lions' den, amid many trials and great temptations.

This is the context in which her ardent commitment to renew the Church takes place, after which, in the summer of 1586, splendours of light from on high came to show her the true state of the post-Tridentine era.

Like Catherine of Siena, she felt "forced" to write some letters of entreaty to the Pope, Curial Cardinals, her Archbishop and other ecclesial personages, for a decisive commitment to "The Renovation of the Church", as the title of the manuscript that contains them says. It consists of 12 letters dictated in ecstasy, perhaps never sent, but which remain as a testimony of her passion for the Sponsa Verbi.

With Pentecost of 1590 her difficult trial ended. She promised to dedicate herself with all her energy to the service of the community and in particular to the formation of novices. Sr Mary Magdalene had the gift to live communion with God in an ever more interior form, so as to become a reference point for the whole community who still today continue to consider her "mother".

The purified love that pulsated in her heart opened her to desire full conformity with Christ, her Spouse, even to sharing with him the "naked suffering" of the Cross. Her last three years of life were a true Calvary of suffering for her. Consumption began to clearly manifest itself: Sr Mary Magdalene was obliged to withdraw little by little from community life to immerse herself ever more in "naked suffering for love of God".

She was oppressed by atrocious physical and spiritual pain which lasted until her death on Friday, 25 May 1607. She passed away at 3 p.m., while an unusual joy pervaded the entire monastery.

Within 20 years of her death the Florentine Pontiff Urban VIII had already proclaimed her Blessed. Pope Clement IX inscribed her in the Roll of Saints on 28 April 1669.

Her body has remained incorrupt and is the destination of constant pilgrimages. The monastery where the Saint lived is today the seat of the Archiepiscopal Seminary of Florence, which venerates her as their Patron, and the cell where she died has become a chapel in whose silence one can still feel her presence.

St Mary Magdalene de' Pazzi continues to be an inspiring spiritual figure for the Carmelites Nuns of the Ancient Observance. They see in her the "Sister" who has travelled the entire way of transforming union with God and who finds in Mary the "star" of the way to perfection.

This great Saint has for everyone the gift of being a spiritual teacher, particularly for priests, to whom she always nourished a true passion.

I truly hope that the present jubilee celebrations commemorating her death will contribute to making this luminous figure ever better known, who manifests to all the dignity and beauty of the Christian vocation. As, while she was alive, grasping the bells she urged her Sisters with the cry: "Come and love Love!", may the great Mystic, from Florence, from her Seminary, from the Carmelite monasteries that draw their inspiration from her, still make her voice heard in all the Church, spreading to every human creature the proclamation to love God.

With this wish, I entrust you, Venerable Brother, and the Florentine Church to the heavenly protection of St Mary Magdalene de' Pazzi and heartily impart to all a special Apostolic Blessing.