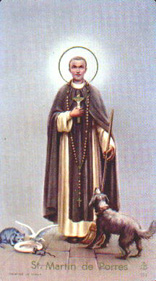 Saint Martin de Porres was born on December 9, 1579, in Lima, Peru. He was the illegitimate son of wealthy Spanish knight Juan de Porres and a freed slave woman from Panama, Anna Velasquez, who was of mixed raced. At the age of fifteen, Martin became a "resident oblate" in the Dominican Friary in Lima and was accepted as a lay brother nine years later. He had a desire to be a foreign missionary somewhere to earn martyrdom, but he spent his whole life in Lima working as a barber, farm laborer, almoner (one who collects and distributes alms for the poor), and doctor's assistant, among other things.

Martin was blessed with great graces and miracles such as: curing the sick, aerial flights, and bilocation. He was very humble and called himself "Brother Broom". He treated all with love and did not discriminate against anyone who needed help. Not only did he love all people, but animals as well, even rodents, and he maintained a hospital for cats and dogs in the house of his sister. In his charity, he also started an institution for poor children to educate them and to teach them a trade so that they would have better lives; and he established an open garden planted with fig trees which was accessible to all the poor for food.

Saint Martin died on November 3, 1639 of typhus (a disease that is contracted from lice, mites, or fleas), probably contracted due to his contact with animals. He was carried to his tomb by bishops and noblemen. He was canonized by Pope John XXIII on May 6, 1962. He was also the first Black saint of the Americas and a contemporary of Saint Rose of Lima. Saint Martin is the patron saint of nurses and health care assistants, sick livestock, and is called on against rats and mice.

Collect:
O God, who led Saint Martin de Porres
by the path of humility to heavenly glory,
grant that we may so follow his radiant example in this life
as to merit to be exalted with him in heaven.
Through our Lord Jesus Christ, your Son,
who lives and reigns with you in the unity of the Holy Spirit,
one God, for ever and ever. +Amen.

First Reading: Philippians 4:4-9
Rejoice in the Lord always; again I will say, Rejoice. Let all men know your forbearance. The Lord is at hand. Have no anxiety about anything, but in everything by prayer and supplication with thanksgiving let your requests be made known to God. And the peace of God, which passes all understanding, will keep your hearts and your minds in Christ Jesus.

Excerpt from: LECTURE BY H.E. CARDINAL RATZINGER AT THE BISHOPS' CONFERENCE OF THE REGION OF CAMPANIA IN BENEVENTO (ITALY) ON THE TOPIC: "EUCHARIST, COMMUNION AND SOLIDARITY", Sunday June 2, 2002

The great social saints were in reality always the great Eucharistic saints. I would like to mention just two examples chosen entirely at random.

First of all, the beloved figure of St Martin de Porres, who was born in 1569 in Lima, Peru, the son of an Afro-American mother and a Spanish nobleman. Martin lived from the adoration of the Lord present in the Eucharist, passing entire nights in prayer before the crucified Lord in the tabernacle, while during the day he tirelessly cared for the sick and assisted the socially outcast and despised, with whom he, as a mulatto, identified because of his origins. The encounter with the Lord, who gives himself to us from the cross, makes all of us members of the one body by means of the one bread, which when responded to fully moves us to serve the suffering, to care for the weak and the forgotten.

In our time, we can recall the person of Mother Teresa of Calcutta. Wherever she opened the houses of her sisters to the service of the dying and outcast, the first thing she asked for was a place for the tabernacle, because she knew that only beginning from there, would come the strength for such service.

Briefly, I would like to recall a second important New Testament text concerning the word "communion" (koinonia). It is found right at the beginning of the first Letter of John (1,3-7), where he speaks of the encounter granted him with the Word made flesh. John says that he is transmitting what he has seen with his own eyes and touched with his own hands. This encounter has given him the gift of koinonia - communion - with the Father and his Son, Jesus Christ. It has become a true "communion" with the living God. As John expresses it, the communion has opened his eyes and he now lives in the light, that is, in the truth of God, which is expressed in the unique, new commandment, which encompasses everything - the commandment to love. And so the communion with the "Word of life" becomes the just life, becomes love. In this way it also becomes reciprocal communion:  "If we walk in the light, as he is in the light, we are in communion one with another" (I Jn 1,6).

The text shows the same logic of communio that we already found in Paul:  communion with Jesus becomes communion with God himself, communion with the light and with love; it becomes in this way an upright life, and all of this unites us with one another in the truth. Only when we regard communion in this depth and breadth do we have something to say to the world.

**Women for Faith & Family operates solely on your generous donations! *