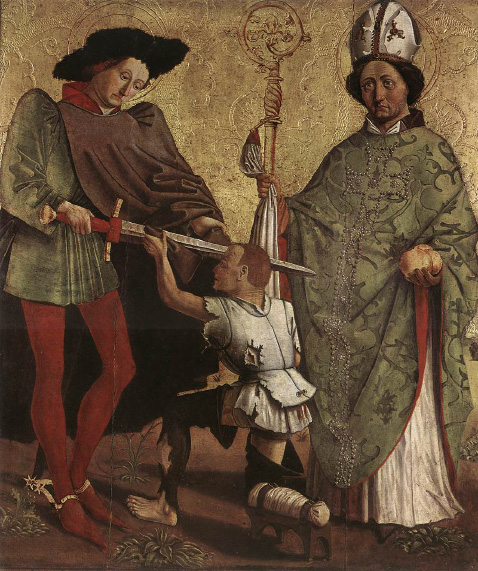 Collect:
O God, who are glorified in the Bishop Saint Martin
both by his life and death,
make new, we pray,
the wonders of your grace in our hearts,
that neither death nor life
may separate us from your love.
Through our Lord Jesus Christ, your Son,
who lives and reigns with you in the unity of the Holy Spirit,
one God, for ever and ever. +Amen.

First Reading: Isaiah 61:1-3
The Spirit of the Lord God is upon me, because the Lord has anointed me to bring good tidings to the afflicted; He has sent me to bind up the brokenhearted, to proclaim liberty to the captives, and the opening of the prison to those who are bound; to proclaim the year of the Lord's favor, and the day of vengeance of our God; to comfort all who mourn; to grant to those who mourn in Zion -- to give them a garland instead of ashes, the oil of gladness instead of mourning, the mantle of praise instead of a faint spirit; that they may be called oaks of righteousness, the planting of the Lord, that He may be glorified.

Gospel: Matthew 25:31-40
"When the Son of man comes in His glory, and all the angels with Him, then He will sit on His glorious throne. Before Him will be gathered all the nations, and He will separate them one from another as a shepherd separates the sheep from the goats, and He will place the sheep at His right hand, but the goats at the left. Then the King will say to those at His right hand, 'Come, O blessed of my Father, inherit the kingdom prepared for you from the foundation of the world; for I was hungry and you gave me food, I was thirsty and you gave me drink, I was a stranger and you welcomed me, I was naked and you clothed me, I was sick and you visited me, I was in prison and you came to me'. Then the righteous will answer him, 'Lord, when did we see thee hungry and feed thee, or thirsty and give thee drink? And when did we see thee a stranger and welcome thee, or naked and clothe thee? And when did we see thee sick or in prison and visit thee?' And the King will answer them, 'Truly, I say to you, as you did it to one of the least of these my brethren, you did it to me'".

Excerpt from A Book of Feasts and Seasons, by Joanna Bogle

Saint Martin, the soldier who became bishop
by Joanna Bogle

Martin was a native of Pannonia -- in modern-day Hungary -- and his father was very anxious that he should go into the Army. This was in the days of the Roman Empire, and to be an officer in the Imperial Army was a very fine opportunity for any young man.

As a junior officer, he was sent to Gaul -- that wild land of northwest Europe inhabited by the mostly pagan Frankish people. There were some Christian cities where bishops were established and a Christian civilization was beginning to emerge.

Martin was interested in Christianity and tried to find out about it. Its message attracted him, and he started to obey some of its precepts. He earned himself some notoriety by refusing to join in some of the bawdier songs and more outlandish activities of military life. He gave freely to the poor, was kind to his servants, and liked to pray. But he postponed the actual step of Christian baptism.

His first posting was to Rheims, and from there he was sent to Amiens. One bitterly cold night, as he was striding along in uniform, a shivering beggar cried out to him for alms. Martin was warmly dressed in the standard-issue thick purple-and-white cloak that was the hallmark of the Imperial officer. Looking at the beggar, Martin knew what he ought to do. He took off his warm cloak and, using his gleaming sword, sliced it in two. He gave half to the beggar and retained the other half so that he would still be in regulation uniform.

The night, the beggar appeared to Martin in a dream: but as a figure surrounded with shining glory -- Christ Himself, still wearing the half of Martin's cloak. Our Lord reminded Martin of His words in the Gospel: "I was naked and you clothed me ... in as much as you did it to the least of the little ones, you did it to Me".

Martin got himself baptized as a Christian, and when his term of duty was up, he left the army and decided to become a priest. He lived for many years the life of a hermit, and, attracting others to the rule of prayer and meditation that he followed, founded a small monastic community that grew steadily.

In due course, Martin's holiness led him to be chosen as Bishop of Tours, although he didn't want the job. As Bishop, his influence was immense -- he won many from the Druid religion to Christianity, and was a central figure in laying the foundations of Christian France. We honor him as Saint Martin of Tours, and if you ever go to Amiens you will see that the site of his encounter with the beggar is still marked today.

Martinmas Ideas
There could be a special supper for Martinmas with a hot casserole of beef to commemorate the old feasting traditions, served with hot baked potatoes and butter.

Martinmas is an obvious day for some act of charity that will benefit and cold and poor this coming winter. It might be a good day for running a rummage sale ("give some clothes in honor of Saint Martin and his cloak!" could be your slogan) or some other fundraising event. There are still too many people who suffer from cold and deprivation in wintertime. Contact your nearest group of the Missionaries of Charity, or any other religious order engaged in this work, to find out what they need.

Ideas from Europe for Martinmas
In many parts of Europe, Saint Martin's Day is celebrated in style. In Sweden, roast goose is the traditional dish and goose banquets are served in homes and restaurants. The meal starts with a bowl of svartsoppa, literally "black soup", made of goose blood and spices.

In Germany, goose is also a traditional feature of the day, and they say that this is because when Saint Martin was about to be chosen as Bishop of Tours, he tried to run away and hide in a flock of geese, because he felt he would be no good at being in charge of an important section of the Church. But the geese cackled and the noise gave him away.

Other Saint Martin's Day traditions include the acting out of the meeting between the saint and the beggar to whom he gave half his cloak. This often forms an outdoor pageant with Saint Martin as a splendid figure dressed as a Roman soldier on a horse.

Lanterns
But undoubtedly the main festivity on Saint Martin's Day -- especially in France and Germany -- is that of making paper lanterns and carrying them in procession. Children form groups -- either informally or as part of an official organization -- and walk through the streets with paper lanterns that they have either made or bought. Shops produce a variety of lanterns depicting everything from spacemen to Mickey Mouse for the processions. Undoubtedly, it is as much a celebration of the arrival of winter, with its long dark evenings, as of Saint Martin. There are lantern songs and nonsense rhymes to accompany the processions.

Making a paper lantern
You will need a long strip of strong paper or cardboard, about one foot wide by two feet long. Lay it out flat, and cut out some windows -- star shapes look attractive. Decorate it any way you like. Now bend it around, glue the ends together, and stand it upright. Draw around its base, then add a couple of inches around the circle and cut it out, sticking it in to make a floor. Attach a candle to this -- the easiest sort to use is a "tea light" in a small metal container as this can simply be glued firmly to the base. The lantern will now need a long handle -- a string one like the handle on a bucket is best. This can be hung over a stick -- and the lantern is ready to be taken in procession.

Joanna Bogle is a Catholic writer and journalist living in England. She is a member of the Women for Faith and Family Editorial Board. Joanna broadcasts with the BBC and with Mother Angelica's EWTN radio, on which she has a "Catholic Heritage" series featuring places of pilgrimage and of historic interest in Europe. She is active with the Association of Catholic Women and with pro-life movements in Britain. **Women for Faith & Family operates solely on your generous donations!