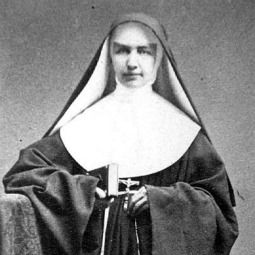 O God, who called us to serve your Son
in the least of our brothers and sisters,
grant, we pray, that by the example and intercession
of the Virgin Saint Marianne Cope,
we may burn with love for you and for those who suffer.
Through our Lord Jesus Christ, your Son,
who lives and reigns with you in the unity of the Holy Spirit,
one God, for ever and ever.

for more information on the Optional Memorial go to the USCCB website - http://www.usccb.org/about/divine-worship/liturgical-calendar/saint-marianne-cope.cfm

The Story of Marianne Cope: A Saint for Central New York

Mother Marianne, formerly Barbara Koob (1838-1918), was born in Germany and grew up in Utica. Her family was a member of St. Joseph’s Parish where she went to school and was confirmed. Even at a young age, she wrote about a religious calling.

She joined the Sisters of Saint Francis in Syracuse in 1862 and was invested at the Church of the Assumption where she was given the name Sister Marianne.

Mother Marianne became a founding leader of sisters and St. Joseph's Hospital in Syracuse in 1869. She discovered her greatest calling by helping people with leprosy, now called Hansen's disease. She took a week long train ride from Syracuse to San Francisco and a seasick ridden week long ship ride on the Pacific Ocean to reach the Hawaiian Islands. She never returned to Central New York, but discovered a new home on Molokai in a place called Kalaupapa.

Mother Marianne witnessed the worst of humanity upon her arrival at the Oahu Branch Hospital for people with leprosy. The 19th century Hawaiian government sent men, women and children to the fenced in compound at the first sign of a lesion hinting at the epidemic illness. The people were scarred by open sores and disfigurement and the corrupt administration of the compound left few resources to properly care for the sick.

Mother Marianne and five other Franciscan sisters did not flinch. They went to work cleaning the filthy compound and combating sexual abuse. They offered dignity and began to serve.

Nearly a century after her passing, Mother Marianne Cope is about to canonized by Pope Benedict XVI at the Vatican in the greatest of tributes offered by the Roman Catholic Church.

It took the miraculous cure of two women through the prayerful intercession of Mother Marianne for the church to elevate her from Venerable to Blessed to Sainthood. The miracles were authenticated in 2004 and 2011.

Pope Benedict XVI will canonize Mother Marianne at the Vatican on October 21.