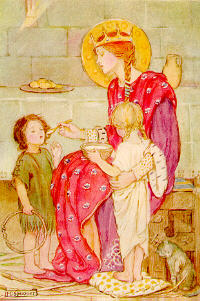 Margaret Atheling, though by birth a Saxon princess, was born in Hungary around 1045, where her father, Edward Atheling ("the Exile"), had been sent in infancy for protection in the court of King (Saint) Stephen of Hungary, following the death of his father, King Edmund, and the invasion of the Danish Canute. Edward married a niece of St. Stephen, Agatha, and they had three children, Edgar, Margaret and Christina. Canute died in 1035, and his sons reigned for seven more years before Edward the Confessor returned from exile in Normandy to re-establish the Anglo-Saxon throne from the Danes' rule.

When Margaret was about ten years old, the saintly King Edward, who never married, brought the exiled family back to England, probably in order to secure the succession; however her father died as soon as they arrived, so her brother Edgar became heir-apparent.

Edward had also sheltered another prince in his court, Malcolm III of Scotland. After Macbeth murdered his father, Duncan, Malcolm was sent to Edward for safety, where he remained for fourteen years, and there surely met Margaret, who would later become his Queen.

The young princess had been educated by the Benedictines in Hungary, and could read Latin at an early age. In England Margaret (whose name derives from margon, "pearl") became known for her devout faith and the beauty of her nature. Her biographer and confessor, Turgot, wrote, "Many have got their name from a quality of their mind. The same was true of this virtuous woman, for the fairness pre-shadowed in her name was eclipsed in the surpassing of her soul". (This biography by her confessor Turgot, a monk of Durham who later became Bishop of St. Andrews, was written at the request of Margaret's daughter Matilda, who married Henry I of England, son of William the Conquerer.)

After the saintly King Edward's death in 1066 he was buried in Westminster Abbey, which he had built. His successor, Harold, was soon defeated at the Battle of Hastings by William of Normandy "the Conquerer".

Margaret and her family were again in danger, and intended to return to Hungary; however, their boat was carried by North Sea winds to Scotland, where they found refuge in the court of Malcolm. Though Margaret originally wished to become a nun (her sister, Christina did enter a convent), Malcolm persuaded her to marry him (in 1097), and through her influence the kingdom was transformed from a remote and barbaric outpost to a beacon of Christian culture. Her charity to the poor, perticularly to children and the elderly, was unparalleled. (Not only did she feed and clothe the many beggars who presented themselves, but she and Malcolm personally washed the feet of these impoverished visitors.)

Malcolm and Margaret had eight children, who were carefully educated and instructed in the Christian faith, and who never wavered in their own fidelity to the Catholic Church. Her sons and grandsons would rule Scotland for 200 years. One son, David, is also a saint especially revered in Scotland. It was he who built a tiny stone chapel for his mother at Edinburgh Castle, where she heard Mass on the day she died. (Completely restored in the 19th century, the little chapel is a gem of Romanesque architecture, and is used today mostly for weddings.)

She initiated an authentic reform of the Scottish Church, which had been in decline and corrupted by abuses of the celebration of Mass and bad leaders, rebuilt and re-established decayed monasteries at Iona and Dumferline, embellished churches with beautiful artifacts -- including embroidered vestments in a style she learned from Hungary (many of which she embrodered herself). She spent many hours in prayer, said the Divine Office daily, using beautifully illuminated books which Malcolm (who couldn't read himself) gave her. In sum, she fostered a renaissance of Catholic belief, learning and culture in Scotland.

Already gravely ill, Margaret died after learning that her beloved husband, Malcolm, and son Edgar had been killed in battle -- on November 16, 1093. She was buried at Dumferline, which instantly became a pilgimage site. Later a shrine was built in the church at Dumferline, and she was officially canonized by Pope Innocent IV in 1249. Her feast day was establshed as June 10 on the Roman calender of saints, though it has always been celebrated in Scotland on November 16. Only the base of the shrine remains today, however. The abbey at Dumferline was destroyed by Reformers in the sixteenth century. The monks had had her and Malcolm's remains removed to Douay, France.

Collect:
O God, who made Saint Margaret of Scotland wonderful
in her outstanding charity towards the poor,
grant that through her intercession and example
we may reflect among all humanity
the image of your divine goodness.
Through our Lord Jesus Christ, your Son,
who lives and reigns with you in the unity of the Holy Spirit,
one God, for ever and ever. +Amen.

First Reading: Isaiah 58:6-11
"Is not this the fast that I choose: to loose the bonds of wickedness, to undo the thongs of the yoke, to let the oppressed go free, and to break every yoke? Is it not to share your bread with the hungry, and bring the homeless poor into your house; when you see the naked, to cover him, and not to hide yourself from your own flesh? Then shall your light break forth like the dawn, and your healing shall spring up speedily; your righteousness shall go before you, the glory of the Lord shall be your rear guard. Then you shall call, and the Lord will answer; you shall cry, and He will say, Here I am. "If you take away from the midst of you the yoke, the pointing of the finger, and speaking wickedness, if you pour yourself out for the hungry and satisfy the desire of the afflicted, then shall your light rise in the darkness and your gloom be as the noonday. And the Lord will guide you continually, and satisfy your desire with good things, and make your bones strong; and you shall be like a watered garden, like a spring of water, whose waters fail not.

Gospel: John 15:9-17
As the Father has loved Me, so have I loved you; abide in My love. If you keep My commandments, you will abide in My love, just as I have kept My Father's commandments and abide in His love. These things I have spoken to you, that My joy may be in you, and that your joy may be full. "This is My commandment, that you love one another as I have loved you. Greater love has no man than this, that a man lay down his life for his friends. You are My friends if you do what I command you. No longer do I call you servants, for the servant does not know what his master is doing; but I have called you friends, for all that I have heard from My Father I have made known to you. You did not choose me, but I chose you and appointed you that you should go and bear fruit and that your fruit should abide; so that whatever you ask the Father in My name, He may give it to you. This I command you, to love one another.