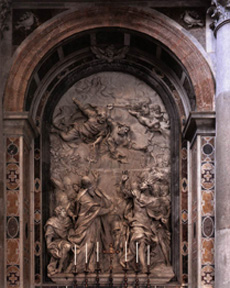 (+461) During his pontificate, the Council of Chalcedon (451) defined that Christ is one divine person with two natures, divine and human, thus confirming Leo's Epistola Dogmatica (Tomus) which was written to the Patriarch Flavin of Constantinople. He defended the unity of the Church and famously delayed the onslaught of Attila.

Collect:
O God, who never allow the gates of hell
to prevail against your Church,
firmly founded on the apostolic rock,
grant her, we pray,
that through the intercession of Pope Saint Leo,
she may stand firm in your truth
and know the protection of lasting peace.
Through our Lord Jesus Christ, your Son,
who lives and reigns with you in the unity of the Holy Spirit,
one God, for ever and ever. +Amen.

First Reading: Ecclesiasticus 39:8-14 [39:6-10 in RSV]
If the great Lord is willing, he will be filled with the spirit of understanding; he will pour forth words of wisdom and give thanks to the Lord in prayer. He will direct his counsel and knowledge aright, and meditate on his secrets. He will reveal instruction in his teaching, and will glory in the law of the Lord's covenant. Many will praise his understanding, and it will never be blotted out; his memory will not disappear, and his name will live through all generations. Nations will declare his wisdom, and the congregation will proclaim his praise.

Gospel Reading: Matthew 16:13-19
Now when Jesus came into the district of Caesarea Philippi, he asked his disciples, "Who do men say that the Son of man is?" And they said, "Some say John the Baptist, others say Elijah, and others Jeremiah or one of the prophets." He said to them, "But who do you say that I am?" Simon Peter replied, "You are the Christ, the Son of the living God." And Jesus answered him, "Blessed are you, Simon Bar-Jona! For flesh and blood has not revealed this to you, but my Father who is in heaven. And I tell you, you are Peter, and on this rock I will build my church, and the powers of death shall not prevail against it. I will give you the keys of the kingdom of heaven, and whatever you bind on earth shall be bound in heaven, and whatever you loose on earth shall be loosed in heaven."

"My dear brethren, there is no doubt that the Son of God took our human nature into so close a union with himself that one and the same Christ is present, not only in the firstborn of all creation, but in all his saints as well. The head cannot be separated from the members, nor the members from the head.

Not in this life, it is true, but only in eternity will God be all in all, yet even  now he dwells, whole and undivided, in his temple the Church. Such was his promise to us when he said: See, I am  with you always, even to the end of the world. And so all that the Son of God did and taught for the world's reconciliation is not for us simply a matter of past history. Here and now we experience his power at work among us.

Born of a virgin mother by the action of the Holy Spirit, Christ keeps his Church spotless and makes her fruitful by the inspiration of the same Spirit. In baptismal regeneration she brings forth children for God beyond all numbering. These are the sons of whom it is written: They are born not of blood, nor of the desire of the flesh, nor of the will of man, but of God. In Christ Abraham's posterity is blessed, because in him the whole world receives the adoption of sons, and in him the patriarch becomes the father of all nations through the birth, not from human stock but by faith, of the descendants that were promised to him. From, every nation on earth, without exception, Christ forms a single flock of those he has sanctified, daily fulfilling the promise he once made: I have other sheep, not of this fold, whom it is also ordained that I shall lead; and there shall be one flock and one shepherd.

Although it was primarily to Peter that he said: Feed my sheep, yet the one Lord guides all pastors in the discharge of their office and leads to rich and fertile pastures all those who come to the rock. There is no counting the sheep who are nourished with his abundant love, and who are prepared to lay down their lives for the sake of the good shepherd who died for them.

But it is not only the martyrs who share in his passion by their glorious courage; the same is true, by faith, of all who are born again in baptism. That is why we are to celebrate the Lord's paschal sacrifice with the unleavened bread of sincerity and truth. The leaven of our former malice is thrown out, and a new creature is filled and inebriated with the Lord himself. For the effect of our sharing in the body and blood of Christ is to change us into what we receive. As we have died with him, and had been buried and raised to life with him, so we bear him within us, both in body and in spirit in everything we do."

AETERNA DEI SAPIENTIA, ENCYCLICAL OF POPE JOHN XXIII  ON COMMEMORATING THE FIFTEENTH CENTENNIAL  OF THE DEATH OF POPE ST. LEO I: THE SEE OF PETER AS THE CENTER OF CHRISTIAN UNITY, NOVEMBER 11, 1961