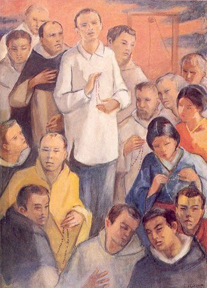 Saint Lawrence was a devoted husband and father of three children in the Philippians. After being wrongfully accused of murder, he fled with Christian missionaries to Japan where he was tortured and killed for the faith. He died profession: "I shall die for God, and for Him I would give many thousands of lives if I had them."

Collect:
Grant us, we pray, Lord God,
the same perseverance shown by your Martyrs
Saint Lawrence Ruiz and his companions
in serving you and their neighbor,
since those persecuted for the sake of righteousness
are blessed in your Kingdom.
Through our Lord Jesus Christ, your Son,
who lives and reigns with you in the unity of the Holy Spirit,
one God, for ever and ever. +Amen.

Readings: From the Common of Martrys

DOMINIC IBANEZ DE ERQUICIA: Spanish Dominican priest, born in Regil (San Sebastian) member of the Province of Spain at first, and afterwards of the Holy Rosary Province. Taught at St. Tomas College (Manila) and preached in various parts of the Philippines. In 1623 he went to Japan where he worked incognito. Denounced to the authorities by a Christian apostate, he was subsequently imprisoned and put to death. He played a very important role as Vicar Provincial to the missions. Part of his letters have been conserved. Age 44.

FRANCIS SHOYEMON: Japanese, Dominican Cooperator Brother. He was a companion of Domingo Ibanez in his apostolate. Arrested in 1633, he received the Dominican habit while in prison. He was killed together with this spiritual father.

JAMES KYUSHEI TOMONAGA OF ST. MARY: Japanese, Dominican priest. Born of a noble Christian family of Kyudetsu, he studied at the Jesuits' College at Nagasaki. He was expelled from Japan in 1614, because he was working as a catechist. He preached in Manila and Taiwan, but in 1632 he returned to his native land to help his fellow Christians. He was arrested, tortured and later killed, "because he was a religious and propagated the faith". He was 51 years, the oldest of the group.

MICHAEL KUROBIOYE: Japanese, lay catechist. He was a companion of Fr. James of St. Mary. When he was imprisoned and tortured, he revealed the hiding place of Fr. James. Soon repenting of what he had done, he joined his companion in his martyrdom, confessing his faith.

LUCAS ALONSO OF THE HOLY SPIRIT: Spanish, Dominican priest, born in Carracedo (Astorga) a son of the Spanish Dominican Province, he joined the Holy Rosary Province in 1617, thus becoming a missionary. After teaching at St. Tomas in Manila and preaching in Cagayan,
he went to Japan in 1623 and worked there, encountering great risks and hardships for ten years. He was arrested while in Osaka (1633) and killed in Nagasaki after being tortured. Age 39.

MATTHEW KOHIOYE OF THE ROSARY: Japanese of Arima, Brother of the Dominican Order. Catechist and helper of Blessed Lucas Alonso, he became a Dominican novice. He was arrested at Osaka in 1633, endured horrible torture but remained faithful to Christ until his death. Age 18.

MAGDALENE OF NAGASAKI: Japanese, Augustinian and Dominican tertiary. Daughter of a martyred Christian couple, she consecrated herself to God. Her spiritual director was Fr. Ansalone. When the latter was arrested, she presented herself to the guards, declaring that she was a Christian. She was tortured in a cruel manner, but remained firm in her faith until she was hung on the gibbet where she died after thirteen days.

MARINA OF OMURA: Japanese, Dominican tertiary. Entered the Third Order in 1626 and was very helpful to the missionaries. She was arrested in 1634 and submitted to shameful humiliations, after which she was burned alive.

HYACINTH JORDAN ANSALONE: Italian, Dominican priest. Born at S. Stefano Quisquina (Agrigento), son of the Dominican Province of Sicily, afterwards joining the Holy Rosary Province. In the Philippines, he worked among the poor and the sick. He went to Japan in 1632 and worked there for two years. He was arrested in 1634 and had to undergo various tortures before dying on the gibbet. Age 36.

THOMAS HIOLI NISM OF ST. HYACINTH: Japanese, Dominican priest. Son of martyred Christians of Hirado, student at the Jesuits' college at Nagasaki. He emigrated to Manila in 1614 after being expelled on account of the persecution. Studied at St. Tomas College, then became a Dominican missionary in Taiwan. He returned later to Japan, where he preached for 5 years among great perils. He was then arrested, tortured and put to death. Age 44.

In 1636, the Dominicans of Manila organized a missionary expedition with the intention of helping the Christians in Japan. As soon as they arrived in the island of Okinawa they were arrested and kept in prison for a year, after which they were transferred and condemned to death by the tribunal of Nagasaki.

ANTHONY GONZALEZ: Spanish, Dominican priest. Born in Leon (Spain), he became a Dominican in his native country, but, moving to Manila (1631) he joined the Holy Rosary Province. He taught at St. Tomas and later became its rector. In 1636 he led the group of missionaries going to Japan, but was soon arrested with the rest. He was a man of much prayer and penance. After a year he died in prison having endured the tortures inflicted upon him by the persecutors. Age 45.

WILLIAM COURTET OR THOMAS OF ST. DOMINIC: Born of noble parents in Serignan (France). He was a member of the Dominican Reformed Congregation of St. Louis but then joined the Holy Rosary Province and went to the Philippines where he taught at St. Tomas and later went to Japan. He also ended up on the gibbet, after a year of imprisonment, during which he endured horrible tortures. He died singing praise to the Blessed Virgin of the Rosary and psalms in the midst of torture. Age 47.

MICHAEL DE AOZARAZA: Spanish, Dominican priest. He was born in Onate (Spain) and became a member of the Province of Spain, but later joined the Holy Rosary Province. He worked in the mission of Bataan (Luzon - Philippines). He refused to give up his faith and accepted with joy tremendous suffering. Age 39.

VINCENT SCHIWOZUKA OF THE CROSS: Japanese, Dominican priest. Son of a Christian family, he was a student at the Jesuits' College and a catechist. He was expelled from Japan in 1614. He later became a priest in Manila and worked among the Japanese exiles. Before returning to his native land (1636) he received the Dominican habit. After a year of imprisonment the tortures induced him to apostatize, but he soon returned to the faith and died as a martyr on the gibbet.

LAZARO OF KYOTO: Japanese, layman. He contracted leprosy and was deported to the Philippines with other lepers. In 1636 he joined Gonzalez as his guide and interpreter. Not resisting to the tortures Lazaro apostatized for a few hours but then repented and died for Christ together with the others.

LAWRENCE Ruiz: Filipino, layman. Born in Binondo (Manila) of a Chinese Father and a Filipino mother, he received his education from the Dominicans, becoming a member of the Rosary Confraternity. He married and fathered three children. Becoming involved in some obscure incident with bloodshed, he joined the missionary expedition in order to escape. He was arrested and endured all kinds of tortures until his death. He thus becomes the Protomartyr of the Philippines.

Miracle proposed for the Canonization

Occurred in Manila in the year 1983 through the intercession of the group in favour of Cecilia Alegria Policarpio, child - 2 years old, cured completely of brain's paralysis without any effective therapy. The miracle was recognized by John Paul II on 1st June, 1987.

The reason why Christians were persecuted

"The followers of Christ, arriving unexpectedly in Japan, not only came here carrying their goods, but also, without any permission, have spread and propagated their wicked law, destroying the good and legitimate one and plotting to overthrow authority in the country. This is the beginning of great calamity, which we should avoid by all means. Japan is a Shintoist and Buddhist country, which venerates the gods, honours Buddha, and respects the 'way of benevolence' (Confucius).

The followers of the Fathers (the Christians) have all disobeyed the orders already given by the government despising religion ... and destroying the good. They are overjoyed when they see those about to be executed; they run after them wherever they go and adore them ... Such is the supreme ideal of this religion. Unless it is suppressed immediately, endless misfortunes will fall on the State. In all the regions of Japan, all these Christians should be eliminated without any delay ... If anyone dares contravene this order, he will be put to death ......