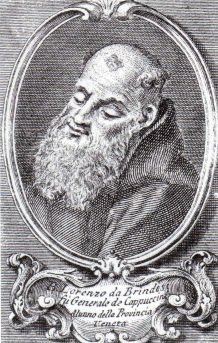 (1559-1619). He was Italian and a Capuchin with great teaching, writing, and leadership abilities. His writings include a commentary on Genesis, several treatises against Luther, and nine volumes of sermons. He preached in many religions of Europe and died in Lisbon.

Collect:
O God, who for the glory of your name
and the salvation of souls
bestowed on the Priest Saint Lawrence of Brindisi
a spirit of counsel and fortitude,
grant, we pray, that in the same spirit,
we may know what must be done
and, through his intercession,
bring it to completion.
Through our Lord Jesus Christ, your Son,
who lives and reigns with you in the unity of the Holy Spirit,
one God, for ever and ever. +Amen.

First Reading: 2 Corinthians 4:1-2,5-7
Therefore, having this ministry by the mercy of God, we do not lose heart. We have renounced disgraceful, underhanded ways; we refuse to practice cunning or to tamper with God's word, but by the open statement of the truth we would commend ourselves to every man's conscience in the sight of God.

For what we preach is not ourselves, but Jesus Christ as Lord, with ourselves as your servants for Jesus' sake. For it is the God who said, "Let light shine out of darkness," who has shone in our hearts to give the light of the knowledge of the glory of God in the face of Christ.

Gospel Reading: Mark 4:1-10, 13-20 [or Mark 4:1-9]
The beginning of the gospel of Jesus Christ, the Son of God. As it is written in Isaiah the prophet, "Behold, I send my messenger before thy face, who shall prepare thy way; the voice of one crying in the wilderness: Prepare the way of the Lord, make his paths straight--" John the baptizer appeared in the wilderness, preaching a baptism of repentance for the forgiveness of sins. And there went out to him all the country of Judea, and all the people of Jerusalem; and they were baptized by him in the river Jordan, confessing their sins. Now John was clothed with camel's hair, and had a leather girdle around his waist, and ate locusts and wild honey. And he preached, saying, "After me comes he who is mightier than I, the thong of whose sandals I am not worthy to stoop down and untie. I have baptized you with water; but he will baptize you with the Holy Spirit."

In those days Jesus came from Nazareth of Galilee and was baptized by John in the Jordan. And when he came up out of the water, immediately he saw the heavens opened and the Spirit descending upon him like a dove.

And he was in the wilderness forty days, tempted by Satan; and he was with the wild beasts; and the angels ministered to him.

Now after John was arrested, Jesus came into Galilee, preaching the gospel of God, and saying, "The time is fulfilled, and the kingdom of God is at hand; repent, and believe in the gospel."

And passing along by the Sea of Galilee, he saw Simon and Andrew the brother of Simon casting a net in the sea; for they were fishermen. And Jesus said to them, "Follow me and I will make you become fishers of men." And immediately they left their nets and followed him. And going on a little farther, he saw James the son of Zebedee and John his brother, who were in their boat mending the nets. And immediately he called them; and they left their father Zebedee in the boat with the hired servants, and followed him.

Dear Brothers and Sisters,
Our catechesis today focuses on Saint Lawrence of Brindisi, a Capuchin friar of the sixteenth and early seventeenth centuries known for his vigorous labour for the salvation of souls, his vast learning and his eloquent preaching. Coming of age at a time when many of the articles of the faith were being called into question, Saint Lawrence applied his immense talents to making clear the biblical and patristic foundations of the teachings of the Church. This son of the Franciscan tradition also applied himself heroically to efforts towards peace and reconciliation between the nations and peoples of Europe. His witness serves as an excellent example for our age, so fraught with violence, ethical relativism and religious indifference. The new evangelization needs well-prepared, zealous and courageous apostles like Saint Lawrence so that the light and beauty of the Gospel may reach into the depths of every human heart. Dear friends, in order to achieve such a lofty vocation, Saint Lawrence of Brindisi would have us grow close to our Lord Jesus Christ by reading the Sacred Scriptures and by cultivating daily the relationship of love with him in personal prayer, because every good action of ours has its beginning and its end in him.