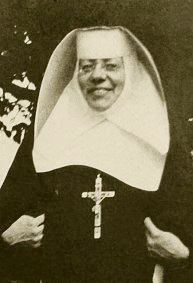 God of love,
you called Saint Katharine Drexel
to teach the message of the Gospel
and to bring the life of the Eucharist
to the Native American and African American peoples;
by her prayers and example, enable us to work for justice
among the poor and the oppressed,
and keep us undivided in love
in the eucharistic community of your Church.
Through our Lord Jesus Christ, Your Son,
who lives and reigns with you in the unity of the Holy Spirit,
one God, for ever and ever. +Amen.

(Readings are from the Common of Virgins or of Holy Women.)

On October 1, 2000, Pope John Paul II canonized Katharine Drexel, an American heiress who devoted her life (and her considerable fortune) to establishing missions, schools and homes for African-American and Native American children in this country. She was beatified November 20, 1988

Katharine was born in Philadelphia November 26, l858, barely three years before the outbreak of the Civil War. So deeply divided was the country over the issue of slavery, with all its heavy moral, ethical, cultural, economic and emotional considerations (not unlike those which attend the abortion issue today), that the young nation was forced to undergo this terrible war to determine whether any nation "conceived in liberty and dedicated to the proposition that all men are created equal" could "long endure", as President Lincoln so concisely expressed it at Gettysburg.

Katharine Drexel grew to maturity in the shadow of the agony of that great war and its aftermath of bitterness and confusion. Although the war to abolish slavery was won and the union of the States preserved, deep and lasting damage had been done. Not only were many thousands of lives destroyed, not only was a culture virtually demolished, but even those who had been "liberated" -- the emancipated slaves -- were subject to continued humiliation and brutal poverty.

Katharine's wealthy and socially prominent family were deeply religious Catholics who conducted a Sunday school for black children in their home. Her parents' example of devotion to their faith and to the needs of others had an indelible formative effect on Katharine. At the age of thirty-three, she founded a separate order of the Sisters of the Blessed Sacrament which was entirely devoted to the active care of African-Americans and Native Americans. She spent the rest of her long life tirelessly and courageously evangelizing and educating these "poorest of the poor". She died Marcn 3, 1955.

Like Saint Philippine Duchesne, who preceded her in work with the Indians of America (and who was canonized in 1988), and like Mother Teresa of Calcutta, Saint Katharine's example shows us that the path to holiness can be found in our willing response to Christ's voice heard in the cries of the most lowly and needy of His people.

Through the strength of their faith and their valiant perseverence in spite of conflict and hardships; through their vigorous and unselfish consecration of all their womanly energies and talents and gifts to serving others; through their whole-hearted obedience to God's will for them, all these women have carried the Light of Christ into the darkest corners of the Earth. They have given strength to the weak with the love and the prayers of their "maternal hearts"; they have sheltered and comforted the forsaken in the warm embrace of their "maternal arms."

Born in Philadelphia, Pennsylvania, in the United States of America, on November 26, 1858, Katharine Drexel was the second daughter of Francis Anthony Drexel and Hannah Langstroth. Her father was a well known banker and philanthropist. Both parents instilled in their daughters the idea that their wealth was simply loaned to them and was to be shared with others.

When the family took a trip to the Western part of the United States, Katharine, as a young woman, saw the plight and destitution of the native Indian-Americans. This experience aroused her desire to do something specific to help alleviate their condition. This was the beginning of her lifelong personal and financial support of numerous missions and missionaries in the United States. The first school she established was St. Catherine Indian School in Santa Fe, New Mexico (1887).

Later, when visiting Pope Leo XIII in Rome, and asking him for missionaries to staff some of the Indian missions that she as a lay person was financing, she was surprised to hear the Pope suggest that she become a missionary herself. After consultation with her spiritual director, Bishop James O'Connor, she made the decision to give herself totally to God, along with her inheritance, through service to American Indians and African-Americans.

Her wealth was now transformed into a poverty of spirit that became a daily constant in a life supported only by the bare necessities. On February 12, 1891, she professed her first vows as a religious, founding the Sisters of the Blessed Sacrament whose dedication would be to share the message of the Gospel and the life of the Eucharist among American Indians and African-Americans.

Always a woman of intense prayer, Katharine found in the Eucharist the source of her love for the poor and oppressed and of her concern to reach out to combat the effects of racism. Knowing that many African-Americans were far from free, still living in substandard conditions as sharecroppers or underpaid menials, denied education and constitutional rights enjoyed by others, she felt a compassionate urgency to help change racial attitudes in the United States.

The plantation at that time was an entrenched social institutionin which the coloured people continued to be victims of oppression. This was a deep affront to Katharine's sense of justice. The need for quality education loomed before her, and she discussed this need with some who shared her concern about the inequality of education for African-Americans in the cities. Restrictions of the law also prevented them in the rural South from obtaining a basic education.

Founding and staffing schools for both Native Americans and African-Americans throughout the country became a priority for Katharine and her congregation. During her lifetime, she opened, staffed and directly supported nearly 60 schools and missions, especially in the West and Southwest United States. Her crowning educational focus was the establishment in 1925 of Xavier University of Louisiana, the only predominantly African-American Catholic institution of higher learning in the United States. Religious education, social service, visiting in homes, in hospitals and in prisons were also included in the ministries of Katharine and the Sisters.

In her quiet way, Katharine combined prayerful and total dependence on Divine Providence with determined activism. Her joyous incisiveness, attuned to the Holy Spirit, penetrated obstacles and facilitated her advances for social justice. Through the prophetic witness of Katharine Drexel's initiative, the Church in the United States was enabled to become aware of the grave domestic need for an apostolate among Native Americans and African-Americans. She did not hesitate to speak out against injustice, taking a public stance when racial discrimination was in evidence.

For the last 18 years of her life she was rendered almost completely immobile because of a serious illness. During these years she gave herself to a life of adoration and contemplation as she had desired from early childhood. She died on March 3, 1955.

Katharine left a four-fold dynamic legacy to her Sisters of the Blessed Sacrament, who continue her apostolate today, and indeed to all peoples:

– her love for the Eucharist, her spirit of prayer, and her Eucharistic perspective on the unity of all peoples;
– her undaunted spirit of courageous initiative in addressing social iniquities among minorities — one hundred years before such concern aroused public interest in the United States;
– her belief in the importance of quality education for all, and her efforts to achieve it;
– her total giving of self, of her inheritance and all material goods in selfless service of the victims of injustice.