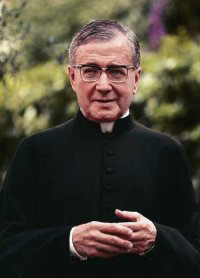 Saint Josemaría Escrivá, the founder of Opus Dei, opened a new path of holiness in the Catholic Church, teaching that people can become holy by performing their work and daily duties with a Christian spirit.

Collect:
God, our Father,
You chose Saint Josemaría
to proclaim the universal call to sanctity
and apostolate in the Church.
By His example and prayers,
grant that in faithfully carrying out
our daily work in the Spirit of Christ,
we may be formed in the likeness of Your Son,
and together with the most Blessed Virgin Mary,
serve the work of redemption with an ardent love.
We ask this through our Lord Jesus Christ, Your Son,
who lives and reigns with You and the Holy Spirit,
one God, for ever and ever. + Amen

First Reading: Gen 2:4b-9, 15
In the day that the Lord God made the earth and the heavens, when no plant of the field was yet in the earth and no herb of the field had yet sprung up--for the Lord God had not caused it to rain upon the earth, and there was no man to till the ground; but a mist went up from the earth and watered the whole face of the ground-- then the Lord God formed man of dust from the ground, and breathed into his nostrils the breath of life; and man became a living being. And the Lord God planted a garden in Eden, in the east; and there He put the man whom He had formed. And out of the ground the Lord God made to grow every tree that is pleasant to the sight and good for food, the tree of life also in the midst of the garden, and the tree of the knowledge of good and evil.

The Lord God took the man and put him in the garden of Eden to till it and keep it.

First Reading: Revelation 19:1, 5-9a [In Easter Season]
After this I, John, heard what seemed to be the loud voice of a great multitude in heaven, crying, "Hallelujah! Salvation and glory and power belong to our God."

And from the throne came a voice crying, "Praise our God, all you His servants, you who fear Him, small and great." Then I heard what seemed to be the voice of a great multitude, like the sound of many waters and like the sound of mighty thunderpeals, crying, "Hallelujah! For the Lord our God the Almighty reigns. Let us rejoice and exult and give him the glory, for the marriage of the Lamb has come, and His Bride has made herself ready; it was granted her to be clothed with fine linen, bright and pure"-- for the fine linen is the righteous deeds of the saints.

And the angel said to me, "Write this: Blessed are those who are invited to the marriage supper of the Lamb."

Second Reading: Romans 8:26-30
Likewise the Spirit helps us in our weakness; for we do not know how to pray as we ought, but the Spirit Himself intercedes for us with sighs too deep for words. And He who searches the hearts of men knows what is the mind of the Spirit, because the Spirit intercedes for the saints according to the will of God. We know that in everything God works for good with those who love Him, who are called according to His purpose. For those whom He foreknew He also predestined to be conformed to the image of His Son, in order that He might be the first-born among many brethren. And those whom He predestined He also called; and those whom He called He also justified; and those whom He justified He also glorified.

Gospel Reading: Luke 5:1-11
While the people pressed upon Jesus to hear the word of God, He was standing by the lake of Gennesaret. And He saw two boats by the lake; but the fishermen had gone out of them and were washing their nets. Getting into one of the boats, which was Simon's, He asked him to put out a little from the land. And He sat down and taught the people from the boat. And when He had ceased speaking, He said to Simon, "Put out into the deep and let down your nets for a catch." And Simon answered, "Master, we toiled all night and took nothing! But at your word I will let down the nets." And when they had done this, they enclosed a great shoal of fish; and as their nets were breaking, they beckoned to their partners in the other boat to come and help them. And they came and filled both the boats, so that they began to sink. But when Simon Peter saw it, he fell down at Jesus' knees, saying, "Depart from me, for I am a sinful man, O Lord." For he was astonished, and all that were with him, at the catch of fish which they had taken; and so also were James and John, sons of Zebedee, who were partners with Simon. And Jesus said to Simon, "Do not be afraid; henceforth you will be catching men." And when they had brought their boats to land, they left everything and followed Him.