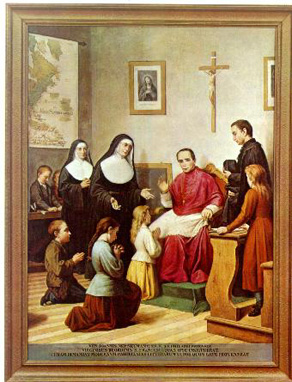 He studied for the priesthood at Charles Ferdinand University at Prague in 1833. The bishop was sick when it was time for ordination. The ordination was not reschedule because Bohemia had an over-abundance of priest. He decided to go to the American missions. Bishop John Dubois ordained him on June 28, 1836. He became a Redemptorists in 1840 and became Bishop of Philadelphia in 1852.

He opened almost 100 schools, built over 50 churches and started building the Cathedral. His diocese grew from 500 to 9000. He also wrote two catechisms and many newspaper articles. He also prescribed Forty Hour devotions (Eucharistic Adoration).

Greetings to you, Brethren, and sons and daughters of the United States of America! We welcome you in the name of the Lord!

In a few brief words we shall describe for the other pilgrims some details of his life, which are already known to you.

At the time of John Neumann, America represented new values and new hopes. Bishop Neumann saw these in their relationship to the ultimate, supreme possession to which humanity is destined. With Saint Paul he could testify that “all are yours, and you are Christ’s, and Christ is God’s” (1 Cor. 3, 22). And with Augustine he knew that our hearts are restless, until they rest in the Lord (S. AUGUSTINI Confessiones, 1, 1).

His love for people was authentic brotherly love. It was real charity: missionary and pastoral charity. It meant that he gave himself to others. Like Jesus the Good Shepherd, he lay down his life for the sheep, for Christ’s flock: to provide for their needs, to lead them to salvation. And today, with the Evangelist, we solemnly proclaim : “There is no greater love than this: to lay down one’s life for one’s friends” (Io. 15, 13).

John Neumann’s pastoral zeal was manifested in many ways. Through faithful and persevering service, he brought to completion the generosity of his initial act of missionary dedication. He helped children to satisfy their need for truth, their need for Christian doctrine, for the teaching of Jesus in their lives. He did this both by catechetical instruction and by promoting, with relentless energy, the Catholic school system in the United States. And we still remember the words of our late Apostolic Delegate in Washington, the beloved Cardinal Amleto Cicognani: “You Americans”, he said, “possess two great treasures: the Catholic school and the Confraternity of Christian Doctrine. Guard them like the apple of your eye” (Cfr. Epistola 2 iunii 1963).

And who can fail to admire all the loving concern that John Neumann showed for God’s people, through his priestly ministry and his pastoral visitations as a Bishop? He deeply loved the Sacramental of Reconciliation: and like a worthy son of Saint Alphonsus he transmitted the pardon and the healing power of the Redeemer into the lives of innumerable sons and daughters of the Church. He was close to the sick; he was at home with the poor; he was a friend to sinners. And today he is the honor of all immigrants, and from the viewpoint of the Beatitudes the symbol of Christian success.

John Neumann bore the image of Christ. He experienced, in his innermost being, the need to proclaim by word and example the wisdom and power of God, and to preach the crucified Christ. And in the Passion of the Lord he found strength and the inspiration of his ministry: Passio Christi conforta me!

The Eucharistic Sacrifice was the center of his life, and constituted for him what the Second Vatican Council would later call “the source and summit of all evangelization” (Presbiterorum Ordinis, 5). With great effectiveness, through the Forty Hours Devotion he helped his parishes become communities of faith and service.

But to accomplish his task, love was necessary. And love meant giving; love meant effort; love meant sacrifice. And in his sacrifice, Bishop Neumann’s service was complete. He led his people along the paths of holiness. He was indeed an effective witness, in his generation, to God’s love for his Church and the world.

There are many who have lived and are still living the divine command of generous love. For love still means giving oneself for others, because Love has come down to humanity; and from humanity love goes back to its divine source! How many men and women make this plan of God the program of their lives! Our praise goes to the clergy, religious and Catholic laity of America who, in following the Gospel, live according to this plan of sacrifice and service. Saint John Neumann is a true example for all of us in this regard. It is not enough to acquire the good things of the earth, for these can even be dangerous, if they stop or impede our love from rising to its source and reaching its goal. Let us always remember that the greatest and the first commandment is this: “You shall love the Lord your God” (Matth. 22, 36).

True humanism in Christianity. True Christianity-we repeatis the sacrifice of self for others, because of Christ, because of God. It is shown by signs; it is manifested in deeds. Christianity is sensitive to the suffering and oppression and sorrow of others, to poverty, to all human needs, the first of which is truth.

Our ceremony today is indeed the celebration of holiness. At the same time, it is a prophetic anticipation-for the Church, for the United States, for the world-of a renewal in love: love for God, love for neighbor.

And in this vital charity, beloved sons and daughters, let us go forward together, to build up a real civilization of love.

Saint John Neumann, by the living power of your example and by the intercession of your prayers, help us today and for ever.

Collect:
O God, who called the Bishop Saint John Neumann,
renowned for his charity and pastoral service,
to shepherd your people in America,
grant by his intercession
that, as we foster the Christian education of youth
and are strenghtened by the witness of brotherly love,
we may constantly increase the family of your Church.
Through our Lord Jesus Christ, your Son,
who lives and reigns with you in the unity of the Holy Spirit,
one God, for ever and ever. +Amen.

First Reading: 1 Corinthians 9:16-19, 22-23
For if I, Paul, preach the gospel, that gives me no ground for boasting. For necessity is laid upon me. Woe to me if I do not preach the gospel! For if I do this of my own will, I have a reward; but if not of my own will, I am entrusted with a commission. What then is my reward? Just this: that in my preaching I may make the gospel free of charge, not making full use of my right in the gospel.


Gospel Reading: John 10:11-16
I am the good shepherd. The good shepherd lays down His life for the sheep. He who is a hireling and not a shepherd, whose own the sheep are not, sees the wolf coming and leaves the sheep and flees; and the wolf snatches them and scatters them. He flees because He is a hireling and cares nothing for the sheep. I am the good shepherd; I know My own and My own know Me, as the Father knows Me and I know the Father; and I lay down My life for the sheep. And I have other sheep, that are not of this fold; I must bring them also, and they will heed My voice. So there shall be one flock, one Shepherd.