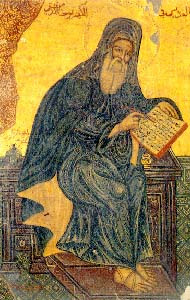 Born in Damascus (675-749), he served for a time as finance misnister to the caliph before his ordination in 726. He then dedicated himself to study and writing, producing both works of dogmatic theology as well as many hymns. One of the principal defenders of the use of images in religious worship, he is considered the last Eastern Father of the Church.

Collect:
Grant, we pray, O Lord,
that we may be helped by the prayers
of the Priest Saint John Damascene,
so that the true faith,
which he excelled in teaching,
may always be our light and our strength.
Through our Lord Jesus Christ, your Son,
who lives and reigns with you in the unity of the Holy Spirit,
one God, for ever and ever. +Amen

First Reading: II Timothy 1:13-14;2:1-3
Follow the pattern of the sound words which you have heard from me[Paul], in the faith and love which are in Christ Jesus; guard the truth that has been entrusted to you by the Holy Spirit who dwells within us.

You then, my son, be strong in the grace that is in Christ Jesus, and what you have heard from me before many witnesses entrust to faithful men who will be able to teach others also. Share in suffering as a good soldier of Christ Jesus.

- Exposition of the Faith