Saint John of the Cross,
Priest & Doctor of the Church
Memorial
December 14th 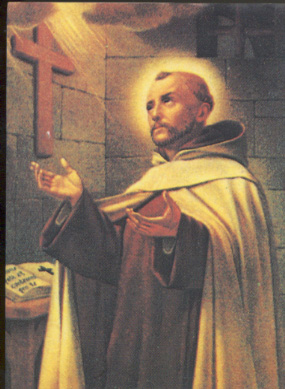 (1542-1591) Born in a town near Avila, Spain, he joined the Carmelitees in 1563. He was persuaded by St. Teresa of Avila to join her in reforming the Carmelites, and as a result he suffered many tribulations, including imprisonment. During his captivity he wrote the Dark Night of the Soul, a complex and profound work of mysticism. He is a doctor of the Church.

Collect:
O God, who gave the Priest Saint John
an outstanding dedication to perfect self-denial
and love of the Cross,
grant that, by imitating him closely at all times,
we may come to contemplate eternally your glory.
Through our Lord Jesus Christ, your Son,
who lives and reigns with you in the unity of the Holy Spirit,
one God, for ever and ever. +Amen.

First Reading: 1 Corinthians 2:1-10a
When I came to you, brethren, I did not come proclaiming to you the testimony of God in lofty words or wisdom. For I decided to know nothing among you except Jesus Christ and Him crucified. And I was with you in weakness and in much fear and trembling; and my speech and my message were not in plausible words of wisdom, but in demonstration of the Spirit and of power, that your faith might not rest in the wisdom of men but in the power of God.

Yet among the mature we do impart wisdom, although it is not a wisdom of this age or of the rulers of this age, who are doomed to pass away. But we impart a secret and hidden wisdom of God, which God decreed before the ages for our glorification. None of the rulers of this age understood this; for if they had, they would not have crucified the Lord of glory. But, as it is written, "What no eye has seen, nor ear heard, nor the heart of man conceived, what God has prepared for those who love Him," God has revealed to us through the Spirit. For the Spirit searches everything, even the depths of God.

Gospel Reading: Luke 14:25-33
Now great multitudes accompanied Him; and He turned and said to them, "If any one comes to Me and does not hate his own father and mother and wife and children and brothers and sisters, yes, and even his own life, he cannot be My disciple. Whoever does not bear his own cross and come after Me, cannot be My disciple. For which of you, desiring to build a tower, does not first sit down and count the cost, whether he has enough to complete it? Otherwise, when he has laid a foundation, and is not able to finish, all who see it begin to mock him, saying, 'This man began to build, and was not able to finish". Or what king, going to encounter another king in war, will not sit down first and take counsel whether he is able with ten thousand to meet him who comes against him with twenty thousand? And if not, while the other is yet a great way off, he sends an embassy and asks terms of peace. So therefore, whoever of you does not renounce all that he has cannot be My disciple.

Saint John of the Cross

Dear Brothers and Sisters in Christ,
In today’s catechesis, we discuss the sixteenth-century Spanish Carmelite mystic, Saint John of the Cross. John was born into a poor family. As a young man he entered the Carmelites and was ordained priest. Soon afterwards, he met Teresa of Avila in what was a decisive encounter for them both, as they discerned plans for reforming the Carmelite Order. He became confessor at Teresa’s monastery, and together they developed a rich articulation of the workings of the Lord upon the soul in the spiritual life. Despite persecution and misunderstanding from within his own Order, John produced some of the most illuminating and insightful treatises in all of Western spirituality. His four major writings are The Ascent of Mount Carmel, The Dark Night of the Soul, The Spiritual Canticle, and The Living Flame of Love. One of the themes much developed by John was that of the purification of the soul: by means of created things, we can discover traces of the living God in this world. Faith, however, is the unique means by which we can come to know God as he is in himself. The demanding process of purification, at times active and at others passive, requires our determined effort, but it is God who is the real centre; all man can do is dispose himself and humble himself before the loving work of God in the soul. In this sense, John is for us a model of humble dedication and of faithful perseverance on the road to spiritual maturity.

Pope John Paul II, who had written his doctoral dissertation on St. John of the Cross, wrote an apostolic letter observing the 400th anniversary of the saint's death. An English translation of this letter is accessible here: http://www.ewtn.com/library/papaldoc/jpmaster.htm

The processional cross used by Pope John Paul II was closely based on a drawing of the crucifixion by St. John of the Cross.