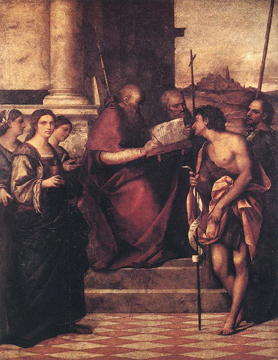 It is simply impossible to lead, without the aid of prayer, a virtuous life. -Saint John Chrysostom

John -- whose surname "Chrysostom" occurs for the first time in the "Constitution" of Pope Vigilius in the year 553 -- is generally considered the most prominent doctor of the Greek Church and the greatest preacher ever heard in a Christian pulpit. His natural gifts, as well as exterior circumstances, helped him to become what he was.

At age 20 St. John Chrysostom met Bishop Meletius who inspired him to devote himself to an ascetic and religious life. He studied Holy Scriptures and frequented the sermons of Meletius. About three years later he received Holy Baptism and was ordained lector. But the young cleric, seized by the desire of a more perfect life, soon afterwards entered one of the ascetic societies near Antioch, which was under the spiritual direction of Carterius and especially of the famous Diodorus, later Bishop of Tarsus. Prayer, manual labour and the study of Holy Scripture were his chief occupations, and we may safely suppose that his first literary works date from this time, for nearly all his earlier writings deal with ascetic and monastic subjects. Four years later, Chrysostom resolved to live as an anchorite in one of the caves near Antioch. He remained there two years, but then as his health was quite ruined by indiscreet watchings and fastings in frost and cold, he prudently returned to Antioch to regain his health, and resumed his office as lector in the church.

Probably in the beginning of 381 Meletius made him deacon, just before his own departure to Constantinople, where he died as president of the Second Ecumenical Council. The successor of Meletius was Flavian. Ties of sympathy and friendship connected Chrysostom with his new bishop. As deacon he had to assist at the liturgical functions, to look after the sick and poor, and was probably charged also in some degree with teaching catechumens. At the same time he continued his literary work, and we may suppose that he composed his most famous book, "On the Priesthood", towards the end of this period, or at latest in the beginning of his priesthood.

In the year 386 Chrysostom was ordained priest by Flavian, and from that dates his real importance in ecclesiastical history. His chief task during the next twelve years was that of preaching, which he had to exercise either instead of or with Bishop Flavian. But no doubt the larger part of the popular religious instruction and education devolved upon him. The earliest notable occasion which showed his power of speaking and his great authority was the Lent of 387, when he delivered his sermons "On the Statues". The people of Antioch, excited by the levy of new taxes, had thrown down the statues of Emperor Theodosius. In the panic and fear of punishment which followed, Chrysostom delivered a series of twenty or twenty-one (the nineteenth is probably not authentic) sermons, full of vigour, consolatory, exhortative, tranquilizing, until Flavian, the bishop, brought back from Constantinople the emperor's pardon. But the usual preaching of Chrysostom consisted in consecutive explanations of Holy Scripture.

Collect:
O God, strength of those who hope in you,
who willed that the Bishop Saint John Chrysostom
should be illustrious by his wonderful eloquence
and his experience of suffering,
grant us, we pray,
that, instructed by his teachings,
we may be strengthened through the example
of his invincible patience.
Through our Lord Jesus Christ, your Son,
who lives and reigns with you in the unity of the Holy Spirit,
one God, for ever and ever. +Amen.

First Reading: Ephesians 4: 1-7,11-13
I therefore, a prisoner for the Lord, beg you to lead a life worthy of the calling to which you have been called, with all lowliness and meekness, with patience, forbearing one another in love, eager to maintain the unity of the Spirit in the bond of peace. There is one body and one Spirit, just as you were called to the one hope that belongs to your call, one Lord, one faith, one baptism, one God and Father of us all, who is above all and through all and in all. But grace was given to each of us according to the measure of Christ's gift. And his gifts were that some should be apostles, some prophets, some evangelists, some pastors and teachers, to equip the saints for the work of ministry, for building up the body of Christ, until we all attain to the unity of the faith and of the knowledge of the Son of God, to mature manhood, to the measure of the stature of the fulness of Christ.

Gospel Reading: Mark 4: 1-10, 13-20
Again he began to teach beside the sea. And a very large crowd gathered about him, so that he got into a boat and sat in it on the sea; and the whole crowd was beside the sea on the land. And he taught them many things in parables, and in his teaching he said to them:

"Listen! A sower went out to sow. And as he sowed, some seed fell along the path, and the birds came and devoured it. Other seed fell on rocky ground, where it had not much soil, and immediately it sprang up, since it had no depth of soil; and when the sun rose it was scorched, and since it had no root it withered away. Other seed fell among thorns and the thorns grew up and choked it, and it yielded no grain. And other seeds fell into good soil and brought forth grain, growing up and increasing and yielding thirtyfold and sixtyfold and a hundredfold." And he said, "He who has ears to hear, let him hear."

And when he was alone, those who were about him with the twelve asked him concerning the parables. And he said to them, "Do you not understand this parable? How then will you understand all the parables? The sower sows the word. And these are the ones along the path, where the word is sown; when they hear, Satan immediately comes and takes away the word which is sown in them. And these in like manner are the ones sown upon rocky ground, who, when they hear the word, immediately receive it with joy; and they have no root in themselves, but endure for a while; then, when tribulation or persecution arises on account of the word, immediately they fall away. And others are the ones sown among thorns; they are those who hear the word, but the cares of the world, and the delight in riches, and the desire for other things, enter in and choke the word, and it proves unfruitful. But those that were sown upon the good soil are the ones who hear the word and accept it and bear fruit, thirtyfold and sixtyfold and a hundredfold."

Prayer to Jesus before Holy Communion

O Lord, my God, I am not worthy that you should come into my soul, but I am glad that you have come to me because in your loving kindness you desire to dwell in me. You ask me to open the door of my soul, which you alone have created, so that you may enter into it with your loving kindness and dispel the darkness of my mind. I believe that you will do this for you did not turn away Mary Magdalene when she approached you in tears. Neither did you withhold forgiveness from the tax collector who repented of his sins or from teh good thief who asked to be received into your kingdom. Indeed, you numbered as your friends all who came to you with repentant hearts. O God, you alone are blessed always, now, and forever.