Saint John of Avila
Doctor of the Church
May 10th 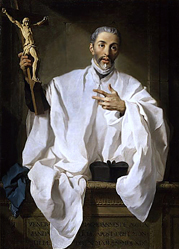 Saint John of Avila, the patron saint of Spanish secular clergy, was a great reformer of the Church in Spain, and one of the greatest preachers of the time. He was known for celebrating Mass with great devotion, and for his spiritual direction, as well as his vigorous efforts to reform and revitalize the practice of the Catholic faith among clergy and laity.

Saints Teresa of Avila, John of God, Francis Borgia were among his disciples, being influenced by his preaching and sanctity.

John was born into a wealthy family who were converts from Judaism. He attended the universities of Salamanca and Alcalá, where he studied philosophy and theology. His parents died while he was a student; and after his ordination to the priesthood in 1525 at Alcalá, he gave his inherited to charity. He had prepared for missionary work to North America, he was persuaded in 1527 by the of Seville to continue his ministry in Spain.

John undertook missions throughout Andalusia for nine years, beginning in 1529. While attracting throngs of penitents, converts, and the faithful, his apostolate also created some influential enemies. The Inquisition investigated his fervent denunciation of wealth and of vice and his encouragement of rigorism; even a spurious connection between his Jewish heritage and charges of heresy was considered. He was acquitted in 1533, after which his fame rose tremendously, securing his reputation as one of Spain’s greatest evangelists.

John’s reform of clerical life (he was a champion of celibacy), considered to be his finest achievement, influenced such eminent disciples as Saints Francis Borgia, John of God, Teresa of Avila, and Luís of Granada (who, in 1588, wrote a life of John, noting him as a leading spiritual director). In 1537 John co-organized the University of Granada with Archbishop Gaspare Avalos; outstanding among the other colleges he founded was that of Baeza. He helped foster in Spain the Society of Jesus, to which he was devoted; he died before he could carry out his plan to become a Jesuit.