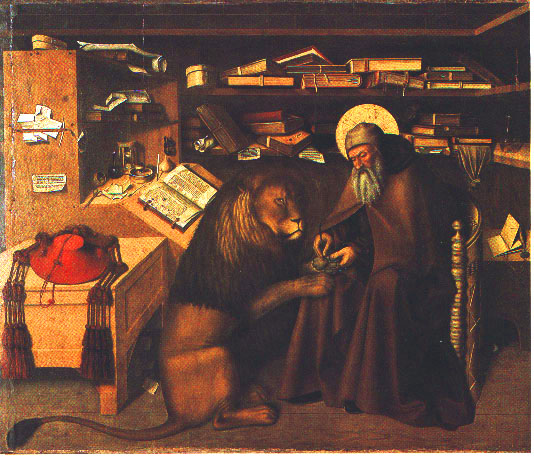 Saint Jerome, a "Father of the Church", is best known for his translation of the Bible into Latin, called the Vulgate (or "common language of the people"), historically the most important vernacular edition of the Holy Scriptures.

Well tutored by his father in religion and essential studies, Jerome (Eusebius Hieronymus Sophronius) was sent as a young man to Rome for further study, where he mastered Latin and Greek (his native language was Illyrian), read widely, and absorbed the cosmopolitan atmosphere. Although he was baptized in Rome, his religious faith declined. He went to Trier to continue studies. Here his religious spirit was reawakened, and he became interested in ecclesial matters.

In 374, Jerome went to Antioch, which was then afflicted with serious disputes and doctrinal divisions, and he spent several years leading an aescetical life in the desert where he suffered temptations, about which he wrote. Though reluctant, he was ordained a priest at Antioch. He believed his vocation to be that of a monk or hermit. He went to Constantinople to study Scripture under Saint Gregory Nazianzen, then in 382 he went to Rome to attend the council Pope Damasus held concerning the schism at Antioch. Jerome became the pope's secretary.

While in this position of influence, he revised the old Latin translations of the Gospels and Psalms, followed by the rest of the New Testament. He became known for his learning and honesty, but was also strongly disliked -- by the pagans as well as by Christians who objected to his teachings and his harsh, outspoken manner. After the pope's death in 385, he decided to return to Antioch; later he went to Jerusalem, Alexandria, and eventually settled in a monastery in Bethlehem, where he led a life of asceticism and study, established a school and a hospice, continued his writings against heresies, and did translations.

It was in Bethlehem that Jerome translated most the books of the Old Testament from Hebrew into Latin, and revised his translation of the Psalms using the Hebrew text. From 395-400, Jerome engaged in a conflict against Origenism. He also had a protracted dispute with Augustine over the interpretation (exegesis) of Saint Paul's epistle to the Galatians.

The Pelagian heresies, the sacking of Rome, attacks by barbarians, and assaults on his Bethlehem monastery by a group of Pelagian thugs exhausted Jerome. He died on September 30, 420, and was buried under the nearby Church of the Nativity, though his body was later reburied in Santa Maria Maggiore, in Rome.

The very prolific literary activity of Saint Jerome, may be summed up under a few principal topics: translations and exegesis of the Bible; theological controversies; historical works; and letters. Saint Jerome owes his place in the history of biblical studies chiefly to his commentaries, revisions and new translations of the Bible from the Hebrew.

Collect:
O God, who gave the Priest Saint Jerome
a living and tender love for Sacred Scripture,
grant that your people
may be ever more fruitfully nourished by your Word
and find in it the fount of life.
Through our Lord Jesus Christ, your Son,
who lives and reigns with you in the unity of the Holy Spirit,
one God, for ever and ever. +Amen.

First Reading: 2 Timothy 3:14-17
But as for you, continue in what you have learned and have firmly believed, knowing from whom you learned it and how from childhood you have been acquainted with the sacred writings which are able to instruct you for salvation through faith in Christ Jesus. All scripture is inspired by God and profitable for teaching, for reproof, for correction, and for training in righteousness, that the man of God may be complete, equipped for every good work.

Gospel Reading: Matthew 13:47-52
"Again, the kingdom of heaven is like a net which was thrown into the sea and gathered fish of every kind; when it was full, men drew it ashore and sat down and sorted the good into vessels but threw away the bad. So it will be at the close of the age. The angels will come out and separate the evil from the righteous, and throw them into the furnace of fire; there men will weep and gnash their teeth.

"Have you understood all this?" They said to him, "Yes." And he said to them, "Therefore every scribe who has been trained for the kingdom of heaven is like a householder who brings out of his treasure what is new and what is old."