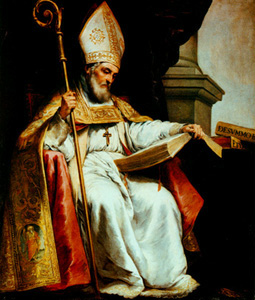 Unknown Artist
Patron of the Internet

History:
St. Isidore was born at Cartagena, Spain, about 560. He was the son of Severianus and Theodora. His elder brother Leander was his immediate predecessor in the Metropolitan See of Seville; while a younger brother St. Fulgentius presided over the Bishopric of Astigi. His sister Florentina was a nun, and is said to have ruled over forty convents and one thousand religious.

St. Isidore received his elementary education in the Cathedral school of Seville. With such diligence did he apply himself to study that in a remarkably short time mastered Latin, Greek, and Hebrew. Whether St. Isidore ever embraced monastic life or not is still an open question, but though he himself may never have been affiliated with any of the religious orders, he esteemed them highly. On his elevation to the episcopate he immediately constituted himself protector of the monks.

On the death of Leander, Isidore succeeded to the See of Seville. St. Isidore presided over the Second Council of Seville in 619. But it was the Fourth National Council of Toledo 633 that afforded him the opportunity of being of the greatest service to his county. At this council, all the bishops of Spain were in attendance. St. Isidore, though far advanced in years, presided over its deliberations, and was the originator of most of its enactments. It was at this council and through his influence that a decree was promulgated commanding all bishops to establish seminaries in their Cathedral Cities, along the lines of the school already existing at Seville. Within his own jurisdiction he had availed himself of the resources of education to counteract the growing influence of Gothic barbarism. His was the quickening spirit that animated the educational movement of which Seville was the center. The study of Greek and Hebrew as well as the liberal arts, was prescribed. Interest in law and medicine was also encouraged. Through the authority of the fourth council this policy of education was made obligatory upon all the bishops of the kingdom. Long before the Arabs had awakened to an appreciation of Greek Philosophy, he had introduced Aristotle to his countrymen. He was the first Christian writer to essay the task of compiling for his co-religionists a summa of universal knowledge. This encyclopedia epitomized all learning, ancient as well as modern. In it many fragments of classical learning are preserved which otherwise had been hopelessly lost. The fame of this work imparted a new impetus to encyclopedic writing, which bore abundant fruit in the subsequent centuries of the Middle Ages. His style, though simple and lucid, cannot be said to be classical. It discloses most of the imperfections peculiar to all ages of transition. It particularly reveals a growing Visigothic influence. Arevalo counts in all Isidore's writing 1640 Spanish words.

Collect:
Graciously hear the prayers, O Lord,
which we make in commemoration of Saint Isidore,
that your Church may be aided by his intercession,
just as she has been instructed by his heavenly teaching.
Through our Lord Jesus Christ, your Son,
who lives and reigns with you in the unity of the Holy Spirit,
one God, for ever and ever. +Amen.

First Reading: 2 Corinthians 4:1-2,5-7
Therefore, having this ministry by the mercy of God, we do not lose heart. We have renounced disgraceful, underhanded ways; we refuse to practice cunning or to tamper with God's word, but by the open statement of the truth we would commend ourselves to every man's conscience in the sight of God. For what we preach is not ourselves, but Jesus Christ as Lord, with ourselves as your servants for Jesus' sake. For it is the God who said, "Let light shine out of darkness," who has shone in our hearts to give the light of the knowledge of the glory of God in the face of Christ.

Gospel Reading: Luke 6:43-45
"For no good tree bears bad fruit, nor again does a bad tree bear good fruit; for each tree is known by its own fruit. For figs are not gathered from thorns, nor are grapes picked from a bramble bush. The good man out of the good treasure of his heart produces good, and the evil man out of his evil treasure produces evil; for out of the abundance of the heart his mouth speaks.


A SAINT FOR THE INTERNET
Saint Isidore of Seville
Although computer experts are not known for expressing their spiritual preferences, the Observation Service for Internet (http:/www.ua-ambit.org/soi/soi.htm), an initiative inspired by the Pontifical Council for Social Communications, has carried out research in different realms of the world of computers and cyberspace to discover the saint who best reflects the concerns and ideals of the experts.

The patron chosen by the pioneers of the new frontier of technology is Saint Isidore, who was born in Seville, Spain in 556.

"The saint who wrote the well-known 'Etymologies' (a type of dictionary), gave his work a structure akin to that of the database. He began a system of thought known today as "flashes;" it is very modern, notwithstanding the fact it was discovered in the sixth century. Saint Isidore accomplished his work with great coherence: it is complete and its features are complementary in themselves."

But this is not the only reason Saint Isidore is identified with computer experts. The Saint from Seville "was ahead of his time and constituted a cultural bridge between the Ancient and Medieval Ages. This also makes us feel close to him, as we are at the beginning of a new stage in history," explained one of the experts interviewed by the Observation Service of Internet.

Saint Isidore was a key figure at the Council of Toledo, in 633. He was known for his concern for the proper formation of the clergy, for his generosity to the poor and for his humility: when he knew he was dying he asked publicly for forgiveness for the faults of his past life. He died a holy death on April 4, 636. This doctor of the Church had three siblings who were also saints: Saint Leandro, his predecessor in the Episcopal seat of Seville; Saint Fulgencio and Saint Florentina.