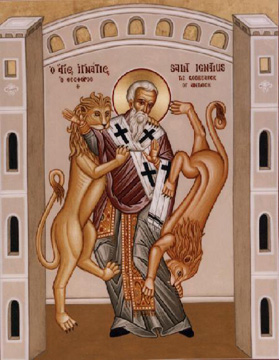 As we already did last Wednesday, we are speaking about the figures of the early Church. Last week we spoke of Pope Clement I, the third Successor of St Peter. Today, we will be speaking of St. Ignatius, who was the third Bishop of Antioch from 70 to 107, the date of his martyrdom. At that time, Rome, Alexandria and Antioch were the three great metropolises of the Roman Empire. The Council of Nicea mentioned three "primacies": Rome, but also Alexandria and Antioch participated in a certain sense in a "primacy".

St Ignatius was Bishop of Antioch, which today is located in Turkey. Here in Antioch, as we know from the Acts of the Apostles, a flourishing Christian community developed. Its first Bishop was the Apostle Peter - or so tradition claims - and it was there that the disciples were "for the first time called Christians" (Acts 11: 26). Eusebius of Caesarea, a fourth-century historian, dedicated an entire chapter of his Church History to the life and literary works of Ignatius (cf. 3: 36).

Eusebius writes: "The Report says that he [Ignatius] was sent from Syria to Rome, and became food for wild beasts on account of his testimony to Christ. And as he made the journey through Asia under the strictest military surveillance" (he called the guards "ten leopards" in his Letter to the Romans, 5: 1), "he fortified the parishes in the various cities where he stopped by homilies and exhortations, and warned them above all to be especially on their guard against the heresies that were then beginning to prevail, and exhorted them to hold fast to the tradition of the Apostles".

The first place Ignatius stopped on the way to his martyrdom was the city of Smyrna, where St Polycarp, a disciple of St John, was Bishop. Here, Ignatius wrote four letters, respectively to the Churches of Ephesus, Magnesia, Tralli and Rome. "Having left Smyrna", Eusebius continues, Ignatius reached Troas and "wrote again": two letters to the Churches of Philadelphia and Smyrna, and one to Bishop Polycarp.

Thus, Eusebius completes the list of his letters, which have come down to us from the Church of the first century as a precious treasure. In reading these texts one feels the freshness of the faith of the generation which had still known the Apostles. In these letters, the ardent love of a saint can also be felt.

Lastly, the martyr travelled from Troas to Rome, where he was thrown to fierce wild animals in the Flavian Amphitheatre.

No Church Father has expressed the longing for union with Christ and for life in him with the intensity of Ignatius. We therefore read the Gospel passage on the vine, which according to John's Gospel is Jesus. In fact, two spiritual "currents" converge in Ignatius, that of Paul, straining with all his might for union with Christ, and that of John, concentrated on life in him. In turn, these two currents translate into the imitation of Christ, whom Ignatius several times proclaimed as "my" or "our God".

Thus, Ignatius implores the Christians of Rome not to prevent his martyrdom since he is impatient "to attain to Jesus Christ". And he explains, "It is better for me to die on behalf of Jesus Christ than to reign over all the ends of the earth.... Him I seek, who died for us: him I desire, who rose again for our sake.... Permit me to be an imitator of the Passion of my God!" (Romans, 5-6).

One can perceive in these words on fire with love, the pronounced Christological "realism" typical of the Church of Antioch, more focused than ever on the Incarnation of the Son of God and on his true and concrete humanity: "Jesus Christ", St Ignatius wrote to the Smyrnaeans, "was truly of the seed of David", "he was truly born of a virgin", "and was truly nailed [to the Cross] for us" (1: 1).

Ignatius' irresistible longing for union with Christ was the foundation of a real "mysticism of unity". He describes himself: "I therefore did what befitted me as a man devoted to unity" (Philadelphians, 8: 1).

For Ignatius unity was first and foremost a prerogative of God, who, since he exists as Three Persons, is One in absolute unity. Ignatius often used to repeat that God is unity and that in God alone is unity found in its pure and original state. Unity to be brought about on this earth by Christians is no more than an imitation as close as possible to the divine archetype.

Thus, Ignatius reached the point of being able to work out a vision of the Church strongly reminiscent of certain expressions in Clement of Rome's Letter to the Corinthians.

For example, he wrote to the Christians of Ephesus: "It is fitting that you should concur with the will of your Bishop, which you also do. For your justly renowned presbytery, worthy of God, is fitted as exactly to the Bishop as the strings are to the harp. Therefore, in your concord and harmonious love, Jesus Christ is sung. And man by man, you become a choir, that being harmonious in love and taking up the song of God in unison you may with one voice sing to the Father..." (4: 1-2).

And after recommending to the Smyrnaeans: "Let no man do anything connected with Church without the Bishop", he confides to Polycarp: "My soul be for theirs who are submissive to the Bishop, to the presbyters and to the deacons, and may my portion be along with them in God! Labour together with one another; strive in company together; run together; suffer together; sleep together; and awake together as the stewards and associates and servants of God. Please him under whom you fight, and from whom you receive your wages. Let none of you be found a deserter. Let your Baptism endure as your arms; your faith as your helmet; your love as your spear; your patience as a complete panoply" (Polycarp, 6: 1-2).

Overall, it is possible to grasp in the Letters of Ignatius a sort of constant and fruitful dialectic between two characteristic aspects of Christian life: on the one hand, the hierarchical structure of the Ecclesial Community, and on the other, the fundamental unity that binds all the faithful in Christ.
Consequently, their roles cannot be opposed to one another. On the contrary, the insistence on communion among believers and of believers with their Pastors was constantly reformulated in eloquent images and analogies: the harp, strings, intonation, the concert, the symphony. The special responsibility of Bishops, priests and deacons in building the community is clear.

This applies first of all to their invitation to love and unity. "Be one", Ignatius wrote to the Magnesians, echoing the prayer of Jesus at the Last Supper: "one supplication, one mind, one hope in love.... Therefore, all run together as into one temple of God, as to one altar, as to one Jesus Christ who came forth from one Father, and is with and has gone to one" (7: 1-2).

Ignatius was the first person in Christian literature to attribute to the Church the adjective "catholic" or "universal": "Wherever Jesus Christ is", he said, "there is the Catholic Church" (Smyrnaeans, 8: 2). And precisely in the service of unity to the Catholic Church, the Christian community of Rome exercised a sort of primacy of love: "The Church which presides in the place of the region of the Romans, and which is worthy of God, worthy of honour, worthy of the highest happiness... and which presides over love, is named from Christ, and from the Father..." (Romans, Prologue).

As can be seen, Ignatius is truly the "Doctor of Unity": unity of God and unity of Christ (despite the various heresies gaining ground which separated the human and the divine in Christ), unity of the Church, unity of the faithful in "faith and love, to which nothing is to be preferred" (Smyrnaeans, 6: 1).

Ultimately, Ignatius' realism invites the faithful of yesterday and today, invites us all, to make a gradual synthesis between configuration to Christ (union with him, life in him) and dedication to his Church (unity with the Bishop, generous service to the community and to the world).

To summarize, it is necessary to achieve a synthesis between communion of the Church within herself and mission, the proclamation of the Gospel to others, until the other speaks through one dimension and believers increasingly "have obtained the inseparable Spirit, who is Jesus Christ" (Magnesians, 15).

Imploring from the Lord this "grace of unity" and in the conviction that the whole Church presides in charity (cf. Romans, Prologue), I address to you yourselves the same hope with which Ignatius ended his Letter to the Trallians:"Love one another with an undivided heart. Let my spirit be sanctified by yours, not only now, but also when I shall attain to God.... In [Jesus Christ] may you be found unblemished" (13).

And let us pray that the Lord will help us to attain this unity and to be found at last unstained, because it is love that purifies souls.

Collect:
Almighty ever-living God,
who adorn the sacred body of your Church
with the confessions of holy Martyrs,
grant, we pray,
that, just as the glorious passion of Saint Ignatius of Antioch,
which we celebrate today,
brought him eternal splendor,
so it may be for us unending protection.
Through our Lord Jesus Christ, your Son,
who lives and reigns with you in the unity of the Holy Spirit,
one God, for ever and ever. +Amen.

First Reading: Philippians 3:17 - 4:1
Brethren, join in imitating me, and mark those who so live as you have an example in us. For many, of whom I have often told you and now tell you even with tears, live as enemies of the cross of Christ. Their end is destruction, their god is the belly, and they glory in their shame, with minds set on earthly things. But our commonwealth is in heaven, and from it we await a Savior, the Lord Jesus Christ, who will change our lowly body to be like his glorious body, by the power which enables him even to subject all things to himself.

Therefore, my brethren, whom I love and long for, my joy and crown, stand firm thus in the Lord, my beloved.

Gospel Reading: John 12:24-26
Truly, truly, I say to you, unless a grain of wheat falls into the earth and dies, it remains alone; but if it dies, it bears much fruit. He who loves his life loses it, and he who hates his life in this world will keep it for eternal life. If any one serves me, he must follow me; and where I am, there shall my servant be also; if any one serves me, the Father will honor him.