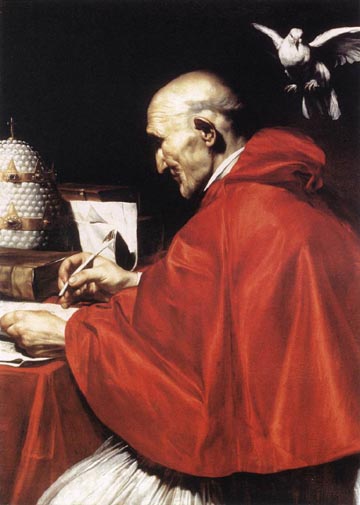 Saint Gregory the Great, one of the most prominent figures in Church history, was born at Rome in 540 and died March 12, 604. The son of a patrician family, Gregory studied law, and became Prefect of Rome when he was in his early thirties. He entered a monastery in Rome (ca 574) where he spent about three years before he was sent as papal legate to Constantinople. After six years in this post, he returned to his monastery (which apparently followed the Benedictine rule) where he soon became abbot. He was elected pope September 3, 590, the first monk to hold this office.

One of Pope Gregory's most significant actions (especially in the view of English-speaking people) was to send missionaries to Great Britain -- notably Augustine (of Canterbury). His interest, it is said, was prompted by seeing young Anglo-Saxon captives for sale in a Roman slave market. According to the story, the pope asked who these fair-haired slaves were, and was told they were Angles. The pope exclaimed in response, "They are not 'Angles' -- they are angels!"

Collect:
O God, who care for your people with gentleness
and rule them in love,
through the intercession of Pope Saint Gregory,
endow, we pray, with a spirit of wisdom
those to whom you have given authority to govern,
that the flourishing of a holy flock
may become the eternal joy of the shepherds.
Through our Lord Jesus Christ, your Son,
who lives and reigns with you in the unity of the Holy Spirit,
one God, for ever and ever. +Amen.

First Reading: II Cor 4:1-2,5-7
Therefore, having this ministry by the mercy of God, we do not lose heart. We have renounced disgraceful, underhanded ways; we refuse to practice cunning or to tamper with God's word, but by the open statement of the truth we would commend ourselves to every man's conscience in the sight of God. For what we preach is not ourselves, but Jesus Christ as Lord, with ourselves as your servants for Jesus' sake. For it is the God who said, "Let light shine out of darkness," who has shone in our hearts to give the light of the knowledge of the glory of God in the face of Christ.

"You are those who have continued with me in my trials; and I assign to you, as my Father assigned to me, a kingdom, that you may eat and drink at my table in my kingdom, and sit on thrones judging the twelve tribes of Israel.

IUCUNDA SANE, ENCYCLICAL OF POPE PIUS X ON POPE GREGORY THE GREAT, Given at Rome at St. Peter's on March 12, of the year 1904, on the feast of St. Gregory I. Pope and Doctor of the Church, in the first year of Our Pontificate