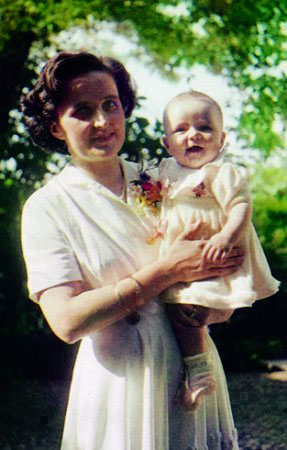 Prayer of Saint Gianna Beretta Molla
Jesus, I promise You to submit myself  to all that You permit to befall me,
make me only know Your will.

My most sweet Jesus, infinitely merciful God, most tender Father of souls,
and in a particular way of the most weak, most miserable, most infirm
which You carry with special tenderness between Your divine arms,
I come to You to ask You, through the love and merits of Your Sacred Heart,
the grace to comprehend and to do always Your holy will,
the grace to confide in You,
the grace to rest securely through time and eternity in Your loving divine arms.

“Gianna Beretta Molla was a simple, but more than ever, significant messenger of divine love. In a letter to her future husband a few days before their marriage, she wrote: "Love is the most beautiful sentiment the Lord has put into the soul of men and women".

“Following the example of Christ, who "having loved his own... loved them to the end" (Jn 13: 1), this holy mother of a family remained heroically faithful to the commitment she made on the day of her marriage. The extreme sacrifice she sealed with her life testifies that only those who have the courage to give of themselves totally to God and to others are able to fulfil themselves.

“Through the example of Gianna Beretta Molla, may our age rediscover the pure, chaste and fruitful beauty of conjugal love, lived as a response to the divine call!”

"A woman of exceptional love, an outstanding wife and mother, she gave witness in her daily life to the demanding values of the Gospel”. In his homily on the occasion of her beatification, April 24, 1994, Pope John Paul II proposed Gianna Beretta Molla as a model for all mothers: “By holding up this woman as an exemplar of Christian perfection, we would like to extol all those high-spirited mothers of families who give themselves completely to their family, who suffer in giving birth, who are prepared for every labor and every kind of sacrifice, so that the best they have can be given to others".

In canonizing Gianna Beretta Molla this spring (2004), the Church officially recognized the extraordinary sanctity of a woman who chose to live an ordinary life – as a professional and, later, as a wife and mother.  Though she had once considered entering a religious order, instead she practiced medicine (receiving her medical degree in 1949, and her specialty in pediatrics in 1952). She devoted herself to caring for her patients, and her selflessness and dedication as a physician endeared her to the people.  But it was not only her practice of medicine that influenced them. She regarded her profession as a mission through which she could aid and nurture both bodies and souls. The young doctor’s devotion to her Catholic faith was well known in her community, and especially her instruction of young Catholic girls in their faith.

Gianna meditated long and prayerfully on God’s will for her. “What is a vocation?”, she wrote: “It is a gift from God – it comes from God Himself! Our concern, then, should be to know the will of God. We should enter onto the path that God wills for us, not by ‘forcing the door’, but when God wills and as God wills” (in Blessed Gianna Beretta Molla: A Woman’s Life. Boston: Pauline Books, 2002, p 71, 72). Gianna believed she was called to marriage and family life, but she waited patiently for God’s will to be revealed.

Gianna Beretta did not marry until she was thirty-three years old – to an engineer ten years her senior, Pietro Molla, whose sister had earlier been a patient of the young Dr. Beretta. Letters Gianna wrote during their year-long courtship reveal her deep commitment to this new vocation. The couple married in September 1955. Several days before their wedding, Gianna wrote to Pietro, reflecting on their vocation to marriage: “With God’s help and blessing, we will do all we can to make our new family a little cenacle where Jesus will reign over all our affections, desires and actions. … We will be working with God in His creation; in this way we can give Him children who will love Him and serve Him”.

Gianna’s faith and her communion with Christ were profound, and from this grace she drew deeper understanding of the dedication and self-giving love that is fundamental to Christian marriage and family life.

After her marriage and even after she had children Gianna continued her medical practice, extending her gifts beyond her immediate family to the children of others.  Three children, a son and two daughters, were born between 1956 and 1959, and Gianna had two miscarriages before conceiving another baby in 1961.  Pietro and Gianna referred to their children as their “treasures”.

In his own account of these years, Pietro Molla says that he did not object to Gianna’s continuing her medical practice, because she was so deeply attached to her patients, though after she became pregnant with their fourth child, Pietro and Gianna had agreed that she would stop working outside the home after the baby was born.

Early in the pregnancy it was discovered that Gianna had a fibroma, a benign tumor, on her uterine wall. Surgery that would involve aborting the baby was suggested, but the Mollas instantly and firmly rejected this idea, and chose surgery that would remove only the tumor. Because of her medical knowledge, Gianna understood more fully than most the risks involved in this delicate surgery – both to her and to her unborn child. She insisted that the baby be protected at all costs.

The surgery successfully removed the fibroma, and the pregnancy continued, apparently normally, and the family made plans for the future in joy and hope. But all was not well, and a few days before the baby was born, Gianna realized it would be a difficult – possibly life-threatening delivery. She asked her husband to promise that if it were necessary to choose between saving her and saving the baby, he should choose the baby. “I insist”, she said.

On Good Friday, Gianna entered the hospital. And a lovely, healthy baby daughter, Gianna Emanuela, was born the next day, April 21, 1962. But the mother had developed a fatal infection – septic peritonitis. (Modern antibiotics most likely would have saved her.) The inflammation caused immense suffering during her final week on earth.  In the midst of her terrible pain, Gianna called to her own mother, Maria, who had died in 1942 – and she prayed. As she lay dying, she repeated, “Jesus, I love you”, over and over.

Her agony ended on April 28 – at home. She was 39. The tiny infant, Gianna Emanuela, was exactly one week old.

The bereft Pietro was left to raise four very young children without their mother:  Pierluigi, the eldest, was not yet six; Mariolina, four; Laura, nearly three; and of course the new baby. In this book are Pietro’s own reflections on the difficult years that followed, and how the example of his wife’s serene and joyous faith helped sustain him through his grief at Gianna’s death; when their little daughter, Mariolina, died only two years later; and through all the ordinary difficulties of raising a family alone – with the added extraordinary challenges of raising children whose absent mother had already become a revered public figure.

Almost immediately upon her death a devotion to Gianna arose among those whose lives she had so deeply touched, and who knew her heroic devotion to her faith and her family.

That her husband, now 91, and three children attended her canonization ceremony is one of several historic “firsts” connected with her canonization. (Pierluigi, an engineer, is married; Laura is a political scientist; Gianna Emanuela is a physician who specializes in Alzheimer’s disease.)

Gianna Beretta Molla is the first married laywoman to be declared a saint (though there are many sainted widows). She is also the first canonized woman physician — a professional woman who was also a “working mom” four decades ago, when this was unusual.

Her witness of abiding faith in Christ, and her example of generous, loving, self-donation — wherever and however she was called to serve the Lord — provide particular inspiration for women of our time and in our culture, where conflicting demands and confusing signals are a daily part of our lives.

There is another aspect of this new saint’s life that is worth pondering – and this book affords a glimpse of it. That is, the role of her family – the example of her parents – in her formation as a committed, active young Catholic. Her family was outstanding for its deep Christian faith, expressed not only in worship, in private prayer and family devotions, but in generously extending their gift of faith to others.

Her family’s example of unselfish love set the direction of young Gianna’s life. It gave her the firm foundation upon which, through the grace of God and her trusting acceptance of His will for her, she confidently built her life – a life that would shelter, nurture, guide, and inspire countless others. Gianna’s plans for raising her own children in the faith was influenced by her own experiences growing up. Her understanding of motherhood came from her own mother. Even though her own children could not know her tender motherly presence while they were growing up, she interceded for them. At the very end of her life, as Gianna suffered mortal pain, she sought her mother’s prayers. As we – especially mothers of young families – may now seek hers.

Saint Gianna, pray for us.