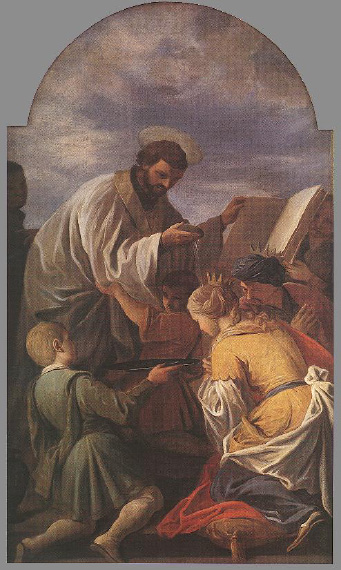 Francis Xavier, one of the greatest missionaries of all time, was born in Navarre, Spain, April 6, 1506, studied in Paris where he met Ignatius of Loyola, and was one of the founding members of the Society of Jesus (Jesuits).

Soon after the Society of Jesus was officially recognized (1540), he began his work of evangelization. His amazing zeal for spreading the Gospel and his remarkably extensive missionary journeys, overcoming great obstacles, during a mere ten years (May 6, 1542 - December 2, 1552), led to the establishment of missions and Churches in India and southeast Asia, as well as in Japan. Countless conversions resulted from his tireless, difficult and very often dangerous work. He is justly considered to be the greatest missionary since the time of the Apostles.

While he was preparing to begin work in China, Francis Xavier suddenly became ill and died on the island of Sancian, near the China coast, on December 2, 1552. He was canonized with St. Ignatius in 1622, although because of the death of Pope Gregory XV, the Bull of canonization was not published until the following year

Collect:
O God, who through the preaching of Saint Francis Xavier
won many peoples to yourself,
grant that the hearts of the faithful
may burn with the same zeal for the faith
and that Holy Church may everywhere rejoice
in an abundance of offspring.
Through our Lord Jesus Christ, your Son,
who lives and reigns with you in the unity of the Holy Spirit,
one God, for ever and ever. + Amen

First Reading: 1 Corinthians 9:16-19,22-23
For if I preach the gospel, that gives me no ground for boasting. For necessity is laid upon me. Woe to me if I do not preach the gospel! For if I do this of my own will, I have a reward; but if not of my own will, I am entrusted with a commission. What then is my reward? Just this: that in my preaching I may make the gospel free of charge, not making full use of my right in the gospel.


Gospel Reading: Mark 16:15-20
Jesus appeared to the Eleven and said to them, "Go into all the world and preach the gospel to the whole creation. He who believes and is baptized will be saved; but he who does not believe will be condemned. And these signs will accompany those who believe: in My name they will cast out demons; they will speak in new tongues; they will pick up serpents, and if they drink any deadly thing, it will not hurt them; they will lay their hands on the sick, and they will recover."

So then the Lord Jesus, after He had spoken to them, was taken up into heaven, and sat down at the right hand of God. And they went forth and preached everywhere, while the Lord worked with them and confirmed the message by the signs that attended it. Amen.

To the greater glory of God