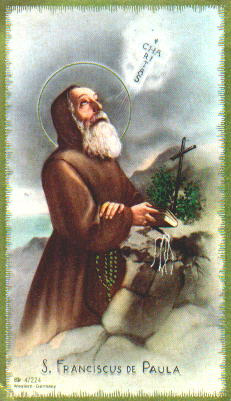 Saint Francis of Paola founded the Order of Minims. He was born in 1416 in Paula in Calabria, Italy. His parents were remarkable for the holiness of their lives. Remaining childless for some years after their marriage they had recourse to prayer, especially commending themselves to the intercession of St. Francis of Assisi. Francis was the eldest of three children. He suffered from a swelling which endangered the sight of one of his eyes. His parents again had recourse to Francis of Assisi, and made a vow that their son should pass an entire year in the "little habit" of St Francis in one of the convents of his order, a not uncommon practice in the Middle Ages. The child was immediately cured. From his early years Francis showed signs of extraordinary sanctity, and at the age of thirteen, being admonished by a vision of a Franciscan friar, he entered a convent of the Franciscan Order in order to fulfil the vow made by his parents. Here he gave great edification by his love of prayer and mortification, his profound humility, and his prompt obedience. At the completion of the year he went with his parents on a pilgrimage to Assisi, Rome, and other places of devotion. Returning to Paula he selected a retired spot on his father's estate, and there lived in solitude; but later on he found a more retired dwelling in a cave on the sea coast. Here he remained alone for about six years giving himself to prayer and mortification.

In 1435 two companions joined him in his retreat, and to accommodate them Francis caused three cells and a chapel to be built: in this way the new order was begun. The number of his disciples gradually increased, and about 1454, with the permission of Pyrrhus, Archbishop of Cosenza, Francis built a large monastery and church. The building of this monastery was the occasion of a great outburst of enthusiasm and devotion on the part of the people towards Francis: even the nobles carried stones and joined in the work. Their devotion was increased by the many miracles which the saint wrought in answer to their prayers. The rule of life adopted by Francis and his religious was one of extraordinary severity. They observed perpetual abstinence and lived in great poverty, but the distinguishing mark of the order was humility. They were to seek to live unknown and hidden from the world. To express this character which he would have his disciples cultivate, Francis eventually obtained from the Holy See that they should be styled Minims, the least of all religious. In 1474 Sixtus IV gave him permission to write a rule for his community, and to assume the title of Hermits of St. Francis: this rule was formally approved by Alexander VI, who, however, changed their title into that of Minims. After the approbation of the order, Francis founded several new monasteries in Calabria and Sicily. He also established convents of nuns, and a third order for people living in the world, after the example of St. Francis of Assisi.

The last three mouths of his life he spent in entire solitude, preparing for death. On Maundy Thursday he gathered his community around him and exhorted them especially to have mutual charity amongst themselves and to maintain the rigour of their life and in particular perpetual abstinence. The next day, Good Friday, he again called them together and gave them his last instructions and appointed a vicar-general. He then received the last sacraments and asked to have the Passion according to St. John read out to him, and whilst this was being read, his soul passed away. Leo X canonized him in 1519. In 1562 the Huguenots broke open his tomb and found his body incorrupt. They dragged it forth and burnt it, but some of the bones were preserved by the Catholics and enshrined in various churches of his order. The Order of Minims does not seem at any time to have been very extensive, but they had houses in many countries. The definitive rule was approved in 1506 by Julius II, who also approved a rule for the nuns of the order. The feast of St. Francis of Paula is kept by the universal Church on April 2, the day on which he died in 1507.

Collect:
O God, exaltation of the lowly,
who raised Saint Francis of Paola to the glory of your Saints,
grant, we pray, that by his merits and example
we may happily attain the rewards promised to the humble.
Through our Lord Jesus Christ, your Son,
who lives and reigns with you in the unity of the Holy Spirit,
one God, for ever and ever. +Amen.

First Reading: Philippians 3:8-14
Indeed I count everything as loss because of the surpassing worth of knowing Christ Jesus my Lord. For His sake I have suffered the loss of all things, and count them as refuse, in order that I may gain Christ and be found in Him, not having a righteousness of my own, based on law, but that which is through faith in Christ, the righteousness from God that depends on faith; that I may know Him and the power of His resurrection, and may share His sufferings, becoming like Him in His death, that if possible I may attain the resurrection from the dead.

Not that I have already obtained this or am already perfect; but I press on to make it my own, because Christ Jesus has made me His own. Brethren, I do not consider that I have made it my own; but one thing I do, forgetting what lies behind and straining forward to what lies ahead, I press on toward the goal for the prize of the upward call of God in Christ Jesus.

Gospel Reading: Luke 12:32-34
"Fear not, little flock, for it is your Father's good pleasure to give you the kingdom. Sell your possessions, and give alms; provide yourselves with purses that do not grow old, with a treasure in the heavens that does not fail, where no thief approaches and no moth destroys. For where your treasure is, there will your heart be also.

A reading from the letters of St Francis of Paola, Hermit (Letter AD 1486)

Turn to the Lord with a pure heart
"May our Lord Jesus Christ, who repays most generously, reward your labour. You must flee from evil, and drive away dangers. We and all our brothers, although unworthy, pray constantly to God the Father and to his Son Jesus Christ, as well as to Mary the Virgin Mother, to be with you as you seek the salvation of your souls and your bodies.

Brothers, I most strongly urge you to work for the salvation of your souls with prudence and diligence. Death is certain, and life is short and vanishes like smoke. Therefore you must fix your minds on the passion of our Lord Jesus Christ who so burned with love for us that he came down from heaven to redeem us. For our sakes he suffered all the agonies of body and mind, and did not shrink from any torment. He gave us a perfect example of patience and love. For our part, we too must be patient when things go against us.

Put aside hatred and hostility. See to it that you refrain from harsh words. But if you do speak them, do not be ashamed to apply the remedy from the same lips that inflicted the wounds. In this way you will show each other mercy and not keep alive the memories of past wrongs. Remembering grievances works great damage. It is accompanied by anger, fosters sin, and brings a hatred for justice. It is a rusty arrow spreading poison in the soul. It destroys virtue and is a cancer in the mind. It thwarts prayer and mangles the petitions we make to God. It drives out love and is a nail driven into the soul, an evil that never sleeps, a sin that never fades away, a kind of daily death.

Be lovers of peace, the most precious treasure that anyone can desire. You are already aware that our sins drive God to anger,"so you must repent of them, that God in his mercy may spare you. What men conceal is open to God. Turn to him with a sincere heart. Live in such a way that you bring upon yourselves the blessing of God, and that the peace of God our Father may be with you always."

Lord God, by whom the holy are exalted, and Saint Francis was raised to share in the glory of the saints, let his prayer and example bring us the reward you have promised to the humble.

Born at Paola in Calabria in the year 1416. He founded a congregation of hermits which was later changed to the Order of Minims and received the approval of the Holy See in 1506. He died at Tours in France in 1507.

(We make our prayer) through our Lord.