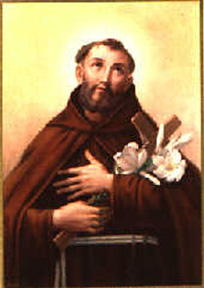 St. Fidelis was born in 1577, at Sigmaringen, Prussia.

He was ordained a priest in 1612, and immediately afterwards was received into the Order of Friars Minor of the Capuchin Reform at Freiburg, taking the name of Fidelis. He has left an interesting memorial of his novitiate and of his spiritual development at that time in a book of spiritual exercises which he wrote for himself. This work was re-edited by Father Michael Hetzenauer, O.F.M. Cap., and republished in 1893 at Stuttgart under the title: "S. Fidelis a Sigmaringen exercitia seraphicae devotionis".

From the beginning of his apostolic career he was untiring in his efforts to convert heretics nor did he confine his efforts in this direction to the pulpit, but also used his pen. He wrote many pamphlets against Calvinism and Zwinglianism though he would never put his name to his writings. Unfortunately these publications have long been lost. Fidelis was still guardian of the community at Feldkirch when in 1621 he was appointed to undertake a mission in the country of the Grisons with the purpose of bringing back that district to the Catholic Faith. The people there had almost all gone over to Calvinism, owing partly to the ignorance of the priests and their lack of zeal. In 1614 the Bishop of Coire had requested the Capuchins to undertake missions amongst the heretics in his diocese, but it was not until 1621 that the general of the order was able to send friars there. In that year Father Ignatius of Sergamo was commissioned with several other friars to place himself at the disposal of this bishop for missionary work, and a similar commission was given to Fidelis who however still remained guardian of Feldkirche. Before setting out on this mission Fidelis was appointed by authority of the papal nuncio to reform the Benedictine monastery at Pfafers. He entered upon his new labors in the true apostolic spirit. Since he first entered the order he had constantly prayed, as he confided to a fellow-friar, for two favors: one, that he might never fall into mortal sin; the other, that he might die for the Faith. In this Spirit he now set out, ready to give his life in preaching the Faith. He took with him his crucifix, Bible, Breviary, and the book of the rule of his order; for the rest, he went in absolute poverty, trusting to Divine Providence for his daily sustenance. He arrived in Mayenfeld in time for Advent and began at once preaching and catechizing; often preaching in several places the same day. His coming aroused strong opposition and he was frequently threatened and insulted. He not only preached in the Catholic churches and in the public streets, but occasionally in the conventicles of the heretics. At Zizers one of the principal centers of his activity, he held conferences with the magistrates and chief townsmen, often far into the night. They resulted in the conversion of Rudolph de Salis, the most influential man in the town, whose public recantation was followed by many conversions.

Through the winter Fidelis labored indefatigably and with such success that the heretic preachers were seriously alarmed and set themselves to inflame the people against him by representing that his mission was political rather than religious and that he was preparing the way for the subjugation of the country by the Austrians. During the Lent of 1622 he preached with special fervor. At Easter he returned to Feldkirch to attend a chapter of the order and settle some affairs of his community. By this time the Congregation of the Propaganda had been established in Rome, and Fidelis was formally constituted by the Congregation, superior of the mission in the Grisons. He had, however, a presentiment that his laborers would shortly be brought to a close by a martyr's death. Preaching a farewell sermon at Feldkirch he said as much. On re-entering the country of the Grisons he was met everywhere with the cry: "Death to the Capuchins!" On April 24, 1622, being then at Grusch, he made his confession and afterwards celebrated Mass and preached. Then he set out for Sevis. On the way his companions noticed that he was particularly cheerful. At Sevis he entered the church and began to preach, but was interrupted by a sudden tumult both within and without the church. Several Austrian soldiers who were guarding the doors of the church were killed and Fidelis himself was struck. A Calvinist present offered to lead him to a place of security. Fidelis thanked the man but said his life was in the hands of God. 0utside the church he was surrounded by a crowd led by the preachers who offered to save his life if he would apostatize. Fidelis replied: "I came to extirpate heresy, not to embrace it", whereupon he was struck down. He was the first martyr of the Congregation of Propaganda.

He was beatified in 1729, and canonized in 1745. St. Fidelis is usually represented in art with a crucifix and with a wound in the head; his emblem is a bludgeon.

Collect:
O God, who were pleased to award
the palm of martyrdom to Saint Fidelis
as, burning with love for you, he propagated the faith,
grant, we pray, through his intercession,
that, grounded in charity,
we may merit to know with him
the power of the Resurrection of Christ.
Who lives and reigns with you in the unity of the Holy Spirit,
one God, for ever and ever. +Amen.

First Reading: Colossians 1:24-29
Now I rejoice in my sufferings for your sake, and in my flesh I complete what is lacking in Christ's afflictions for the sake of His body, that is, the church, of which I became a minister according to the divine office which was given to me for you, to make the word of God fully known, the mystery hidden for ages and generations but now made manifest to his saints. To them God chose to make known how great among the Gentiles are the riches of the glory of this mystery, which is Christ in you, the hope of glory. Him we proclaim, warning every man and teaching every man in all wisdom, that we may present every man mature in Christ. For this I toil, striving with all the energy which he mightily inspires within me.