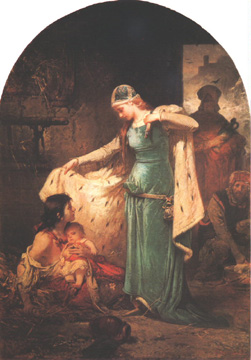 (1207-1231) She was the daughter of the King of Hungary and in 1221 married Ludwig, the Landgrave of Thuringia. With Ludwig she had four children. After her husband's death in 1227, she became a Franciscan tertiary, devoting herself to caring for the poor, the sick, and the aged. She died in exceptional poverty and was canonized in 1235.

Collect:
O God, by whose gift Saint Elizabeth of Hungary
recognized and revered Christ in the poor,
grant, through her intercession,
that we may serve with unfailing charity
the needy and those afflicted.
Through our Lord Jesus Christ, your Son,
who lives and reigns with you in the unity of the Holy Spirit,
one God, for ever and ever. +Amen.

First Reading: 1 John 3:14-18
We know that we have passed out of death into life, because we love the brethren. He who does not love abides in death. Any one who hates his brother is a murderer, and you know that no murderer has eternal life abiding in him. By this we know love, that He laid down His life for us; and we ought to lay down our lives for the brethren. But if any one has the world's goods and sees his brother in need, yet closes his heart against him, how does God's love abide in him? Little children, let us not love in word or speech but in deed and in truth.


Gospel Reading: Luke 6:27-38
"But I say to you that hear, Love your enemies, do good to those who hate you, bless those who curse you, pray for those who abuse you. To him who strikes you on the cheek, offer the other also; and from him who takes away your coat do not withhold even your shirt. Give to every one who begs from you; and of him who takes away your goods do not ask them again. And as you wish that men would do to you, do so to them.

In our catechesis today I wish to speak about Saint Elizabeth of Hungary, also known as Saint Elizabeth of Thuringia. She was born in the early thirteenth century. Her father was the King of Hungary, and Elizabeth was known from an early age for her fidelity to prayer and her attention to the poor. Though she was married to Ludwig, a nobleman, for political reasons, she and her husband developed a sincere love for each other, one deepened by faith and the desire to do the Lord’s will.

In her married life, Elizabeth did not compromise her faith in spite of the requirements of life at court. She preferred to feed the poor than to dine at banquets, and to clothe the naked than to dress in costly garments. Because of their deep faith in God, Elizabeth and Ludwig supported each other in their religious duties. After his early death, she dedicated herself to the service of the poor, always performing the humblest and most difficult works. She founded a religious community, and lived her vows until her death at an early age. She was canonized four years later, and is a patroness of the Third Order of Saint Francis. May her dedication to the poor and needy inspire in us the same love for Christ in our neighbour.