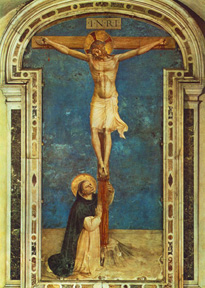 Saint Dominic founded the Order of Preachers, known as the Dominican Order.

He was born in 1170 to Felix Guzman and Joanna of Aza. Little is known of Felix Guzman except that he was in every sense the worthy head of a family of saints. Joanna of Aza's nobility of soul enshrined her in the popular veneration and in 1828 she was solemnly beatified by Leo XII. The example of such parents was not without its effect upon their children. Not only Saint Dominic but also his brothers, Antonio and Manes, were distinguished for their extraordinary sanctity. Antonio, the eldest, became a secular priest and, having distributed his patrimony to the poor, entered a hospital where he spent his life ministering to the sick. Manes, following in the footsteps of Dominic, became a Friar Preacher, and was beatified by Gregory XVI.

The life of St. Dominic was one of tireless effort in the, service of god. While he journeyed from place to place he prayed and preached almost uninterruptedly. While his charity was boundless he never permitted it to interfere with the stern sense of duty that guided every action of his life. If he abominated heresy and labored untiringly for its extirpation it was because he loved truth and loved the souls of those among whom he labored. He never failed to distinguish between sin and the sinner. It is not to be wondered at, therefore, if this athlete of Christ, who had conquered himself before attempting the reformation of others, was more than once chosen to show forth the power of God.

After signing the Bull of canonization on July 13, 1234, Gregory IX declared that he no more doubted the saintliness of Saint Dominic than he did that of Saint Peter and Saint Paul.

Collect:
May Saint Dominic come to the help of your Church
by his merits and teaching, O Lord,
and may he, who was an outstanding preacher of your truth,
be a devoted intercessor on our behalf.
Through our Lord Jesus Christ, your Son,
who lives and reigns with you in the unity of the Holy Spirit,
one God, for ever and ever. +Amen.

First Reading:1 Corinthians 2:1-10a
When I came to you, brethren, I did not come proclaiming to you the testimony of God in lofty words or wisdom. For I decided to know nothing among you except Jesus Christ and him crucified. And I was with you in weakness and in much fear and trembling; and my speech and my message were not in plausible words of wisdom, but in demonstration of the Spirit and of power, that your faith might not rest in the wisdom of men but in the power of God.

Yet among the mature we do impart wisdom, although it is not a wisdom of this age or of the rulers of this age, who are doomed to pass away. But we impart a secret and hidden wisdom of God, which God decreed before the ages for our glorification. None of the rulers of this age understood this; for if they had, they would not have crucified the Lord of glory. But, as it is written, "What no eye has seen, nor ear heard, nor the heart of man conceived, what God has prepared for those who love him," God has revealed to us through the Spirit. For the Spirit searches everything, even the depths of God.


Gospel Reading: Luke 9:57-62
As they were going along the road, a man said to Him, "I will follow You wherever You go." And Jesus said to him, "Foxes have holes, and birds of the air have nests; but the Son of man has nowhere to lay His head." To another He said, "Follow me." But he said, "Lord, let me first go and bury my father." But He said to him, "Leave the dead to bury their own dead; but as for you, go and proclaim the kingdom of God." Another said, "I will follow you, Lord; but let me first say farewell to those at my home." Jesus said to him, "No one who puts his hand to the plow and looks back is fit for the kingdom of God."

The Call Within -- A Reflection on Contemplative Life -- "For spiritually minded people, religion is as simple as life itself, life lived in its fullness because of leaning toward the "other", toward fulfillment, completion, God." -- by Sister Joseph Andrew Bogdanowicz, OP (Vol XVIII, No 2 -- Pentecost 2003)