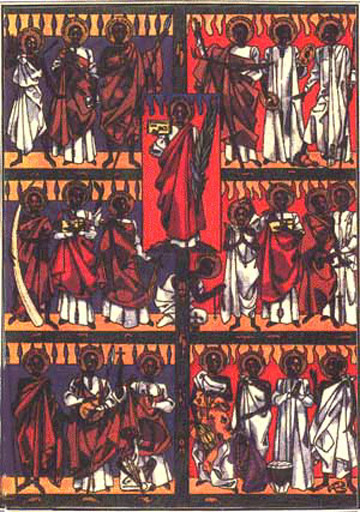 King Mwanga of Uganda launched persecutions of Christians in response to their opposition to his homosexual and corrupt court. St. Charles, the master of his pages, was martyred with fourteen other pages on June 3, 1886; other companions were killed later.

Collect:
O God, who have made the bood of Martyrs
the seed of Christians,
mercifully grant that the field which is your Church,
watered by the blood
shed by Saints Charles Lwanga and his companions,
may be fertile and always yield you an abundant harvest.
Through our Lord Jesus Christ, your Son,
who lives and reigns with you in the unity of the Holy Spirit,
one God, for ever and ever. +Amen.

First Reading: II Maccabees 7:1-2, 9-14
It happened also that seven brothers and their mother were arrested and were being compelled by the king, under torture with whips and cords, to partake of unlawful swine's flesh. One of them, acting as their spokesman, said, "What do you intend to ask and learn from us? For we are ready to die rather than transgress the laws of our fathers."

And when he was at his last breath, he said, "You accursed wretch, you dismiss us from this present life, but the King of the universe will raise us up to an everlasting renewal of life, because we have died for his laws."

After him, the third was the victim of their sport. When it was demanded, he quickly put out his tongue and courageously stretched forth his hands, and said nobly, "I got these from Heaven, and because of His laws I disdain them, and from Him I hope to get them back again." As a result the king himself and those with him were astonished at the young man's spirit, for he regarded his sufferings as nothing.

When he too had died, they maltreated and tortured the fourth in the same way. And when he was near death, he said, "One cannot but choose to die at the hands of men and to cherish the hope that God gives of being raised again by Him. But for you there will be no resurrection to life!"

"The African martyrs add another page to the Church's roll of honor -- an occasion both of mourning and of joy. These African martyrs herald the dawn of a new age. If only the mind of man might be directed not toward persecutions and religious conflicts but toward a rebirth of Christianity and civilization! Africa has been washed by the blood of these latest martyrs, and first of this new age (and, God willing, let them be the last, although such a holocaust is precious indeed). Africa is reborn free and independent."
- from the homily at the canonization of Saint Charles Lwanga and companions by Pope Paul VI

Died at Namugongo, Uganda, 1885-1887; beatified in 1920; canonized by Pope Paul VI in 1964; feast added to the Roman Calendar in 1969; declared the protomartyrs of Black Africa. Twenty-two Catholic men, including seventeen young pages between the ages of 13 and 30, plus some Protestants, were martyred by King Mwanga of Uganda. Their heroic courage rivalled that of the early martyrs.

Catholic Christianity began to take root in Uganda after Cardinal Lavigerie's White Fathers established missions in central Africa in 1879. Progress was made under the rule of the not unfriendly local chieftain named Mtesa; however, his successor, Mwanga detested the faith that would accuse him of debauchery.

King Mwanga of Uganda took as chief steward a young Christian named Joseph Msaka Balikuddembe. Joseph detested the king's debauched ways, especially his attempts to corrupt other young men of Uganda, whom the steward tried to protect. Mwanga distrusted foreign visitors, fearing they might report his evil ways to the British government, which had given him his power.

In October 1885, Mwanga ordered his followers to kill an Anglican missionary, Bishop James Hannington. The Catholic steward Joseph protested at the murder of a fellow Christian. The following month, Mwanga had him beheaded. "A Christian who gives his life for God is not afraid to die," Joseph proclaimed. "Mwanga has condemned me without cause; but tell him I forgive him from my heart." To the king's astonishment, the Christians were not cowed by his sudden outrage.

Six months later Mwanga's savagery was even worse. He discovered that a 14-year-old page, Mwafu, had been receiving instruction in the Catholic faith. He called for Denis Sebuggwago, who had been teaching the page, and killed him by thrusting a butcher's cleaver or spear through his throat. That night Charles Lwanga, the new master of the pages, baptized five of them including Kizito, who he had repeatedly rescued from Mwanga's pederasty.

The next day the baptisms were discovered. Enraged, Mwanga assembled all the pages and ordered the Christians to separate themselves from the others. Fifteen, all under the age of 25, did so at once and were later joined by two others who were already under arrest and by two soldiers. They were asked if they wished to remain Christian and each replied, "Until death." The king then ordered every Protestant and Catholic living in the royal enclosure to be put to death.

Thirty-two Catholics and Protestants were led 37 miles away to a place called Namugongo to be burned to death in a literal holocaust. Three were killed on the way. One of these, a district judge named Matthias Kalemba, declared, "God will rescue me. But you will not see how he does it, because he will take my soul and leave you only my body." He was cut into pieces and left to die slowly by the roadside.

The rest of the martyrs were taken to Namugongo. They were imprisoned there for seven days while a huge pyre was prepared. At the appointed time on Ascension Day, they were forced to lie down on reed mats. Wrapped up in the mats and tightly bound, they were laid side by side. Fuel was poured on them, and they were set afire. As their executioners sang barbarously, the martyrs died confidently praying to their Savior.

The persecution spread. A leader among the confessors was Matthias Murumba, who was killed with revolting cruelty. During the reign of Mwanga about 100 Christians of various denominations were martyred.

(source: For All the Saints, Saint Patrick's church, Washington, DC)