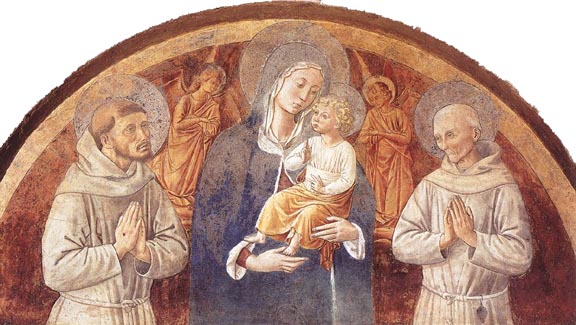 Saint Bernardine of Siena was called the "Apostle of Italy". Left an orphan at six Bernardine was brought up with great care by his pious aunts. His youth was blameless and engaging. In 1397 after a course of civil and canon law, he joined the Confraternity of Our Lady attached to the great hospital of Santa Maria della Scala. Three years later, when the pestilence revisited Siena, he came forth from the life of seclusion and prayer he had embraced, to minister to the plague-stricken, and, assisted by ten companions, took upon himself for four months entire charge of this hospital. Despite his youth Bernardine proved fully equal to this task, but the heroic and unremitting labor it involved so far shattered his health that he never completely recovered. Having distributed his patrimony in charity, Bernardine received the habit of the Friars Minor at San Francesco in Siena, September 8, 1402, but soon withdrew to the Observantine convent of Columbaio outside the city. He was professed September 8, 1403 and ordained September 8, 1404. About 1406 S. Vincent Ferrer, while preaching at Alexandria in Piedmont, foretold that his mantle should descend upon one who was then listening to him, and said that he would return to France and Spain leaving to Bernardine the task of evangelizing the remaining peoples of Italy.

Nearly twelve years passed before this prediction was fulfilled. During this period, of which we have no details, Bernardine seems to have lived in retirement at Capriola. It was in 1417 that his gift of eloquence was made manifest and his missionary life really began at Milan at the close of that year. Thenceforth, various cities contended for the honor of hearing him, and he was often compelled to preach in the market places, his auditors sometimes numbering thirty thousand. Bernardine gradually gained an immense influence over the turbulent, luxurious Italian cities. Pius II, who as a youth had been a spellbound auditor of Bernardine, records that the saint was listened to as another Paul, and Vespasiano da Bisticci, a well-known Florentine biographer, says that by his sermons Bernardine "cleansed all Italy from sins of every kind in which she abounded". The penitents, we are told, flocked to confession "like ants", and in several cities the reforms urged by the saint were embodied in the laws under the name of Riformazioni di frate Bernardino. Indeed, the success which crowned Bernardine's labors to promote morality and regenerate society, can scarcely be exaggerated. He preached with apostolic freedom, openly censuring Visconti, Duke of Milan, and elsewhere fearlessly rebuking the evil in high places which undermined the Quattrocento. In each city he denounced the reining vice so effectively that bonfires were kindled and "vanities" were cast upon them by the cartload. Usury was one of the principal objects of the saint's attacks, and he did much to prepare the way for the establishment of the beneficial loan societies, known as Monti di Pietà. But Bernardine's watchward, like that of St. Francis, was "Peace". On foot he traversed the length and breadth of Italy peacemaking, and his eloquence was exercised with great effect towards reconciling the mutual hatred of Guelphs and Ghibellines. At Crema, as a result of his preaching, the political exiles were recalled and even reinstated in their confiscated possessions. Everywhere Bernardine persuaded the cities to take down the arms of their warring factions from the church and palace walls and to inscribe there, instead, the initials I. H. S. He thus gave a new impulse and a tangible form to the devotion to the Holy Name of Jesus which was ever a favorite topic with him and which he came to regard as a potent means of rekindling popular fervor. He used to hold a board in front of him while preaching, with the sacred monogram painted on it in the midst of rays and afterwards expose it for veneration. Bernardine had to suffer both opposition and persecution. He was accused of heresy, the tablets he had used to promote devotion to the Holy Name being made the basis of a clever attack by the adherents of the Dominican, Manfred of Vercelli, whose false preaching about Antichrist Bernardine had combated. The saint was charged with having introduced a profane, new devotion which exposed the people to the danger of idolatry, and he was cited to appear before the pope. This was in 1427. Martin V received Bernardine coldly and forbade him to preach or exhibit his tablets until his conduct had been examined. The saint humbly submitted, his sermons and writings being handed over to a commission and a day set for his trial. The latter took place at St. Peter's in presence of the pope, 8 June, St. John Capistran having charge of the saint's defence. The malice and futility of the charges against Bernardine were so completely demonstrated that the pope not only justified and commended the saint's teaching, but urged him to preach in Rome. Martin V subsequently approved Bernardine's election as Bishop of Siena. The saint, however, declined this honour as well as the Sees of Ferrara and Urbino, offered to him in 1431 and 1435, respectively, saying playfully that all Italy was already his diocese. After the accession of Eugene IV Bernardine's enemies renewed their accusations against him, but the pope by a Bull, 7 January 1432, annulled their highhanded, secret proceedings and thus reduced the saint's calumniators to silence, nor does the question seem to have been reopened during the Council of Basle as some have asserted. The vindication of Bernardine's teaching was perpetuated by the feast of the Triumph of the Holy Name, conceded to the Friars Minor in 1530 and extended to the Universal Church in 1722.

In 1433 Bernardine accompanied the Emperor Sigismund to Rome for the latter's coronation. Soon after he withdrew to Capriola to compose a series of sermons. He resumed his missionary labours in 1436, but was forced to abandon them in 1438 on his election as Vicar-General of the Observants throughout Italy. Bernardine had laboured strenuously to spread this branch of the Friars Minor from the outset of his religious life, but it is erroneous to style him its founder since the origin of the Observants may be traced back to the middle of the fourteenth century. Although not the immediate founder of this reform, Bernardine became to the Observants what St. Bernard was to the Cistercians their principal support and indefatigable propagator. Some idea of his zeal may be gathered from the fact that, instead of the one hundred and thirty Friars constituting the Observance in Italy at Bernardine's reception into the order, it counted over four thousand before his death. In addition to the number he received into the order, Bernardine himself founded, or reformed, at least three hundred convents of Friars. Not content with extending his religious family at home, Bernardine sent missionaries to different parts of the Orient and it was largely through his efforts that so many ambassadors from different schismatical nations attended the Council of Florence in which we find the saint addressing the assembled Fathers in Greek. Having in 1442 persuaded the pope to accept his resignation as vicar-general so that he might give himself more undividedly to preaching, Bernardine resumed his missionary labours. Although a Bull was issued by Eugene IV, 26 May, 1443, charging Bernardine to preach the indulgence for the Crusade against the Turks, there is no record of his having done so. There is, moreover, no good reason to believe that the saint ever preached outside Italy, and the missionary journey to Palestine mentioned by one of his early biographers may perhaps be traced to a confusion of names.

Miracles multiplied after the saint's death, and he was canonized by Nicholas V, May 24, 1450. On May 17, 1472, Bernardine's body was solemnly translated to the new church of the Observants at Aquila, especially erected to receive it, and enclosed in a costly shrine presented by Louis XI of France. This church having been completely destroyed by earthquake in 1703, was replaced by another edifice where the precious relics of St. Bernardine are still venerated. His feast is celebrated on May 20.

St. Bernardine is accounted the foremost Italian missionary of the fifteenth century, the greatest preacher of his day, the Apostle of the Holy Name, and the restorer of the Order of Friars Minor. He remains one of the most popular of Italian saints, more especially in his own Siena. With both painters and sculptors he has ever been a favorite figure.

Collect:
O God, who gave the Priest Saint Bernardine of Siena
a great love for the holy Name of Jesus,
grant, through his merits and prayers,
that we may ever be set aflame
with the spirit of your love.
Through our Lord Jesus Christ, your Son,
who lives and reigns with you in the unity of the Holy Spirit,
one God, for ever and ever. +Amen.

First Reading: Acts of the Apostles 4:8-12
Then Peter, filled with the Holy Spirit, said to them, "Rulers of the people and elders, if we are being examined today concerning a good deed done to a cripple, by what means this man has been healed, be it known to you all, and to all the people of Israel, that by the name of Jesus Christ of Nazareth, whom you crucified, whom God raised from the dead, by Him this man is standing before you well. This is the stone which was rejected by you builders, but which has become the head of the corner. And there is salvation in no one else, for there is no other name under heaven given among men by which we must be saved."

Gospel Reading: Luke 9:57-62
As they were going along the road, a man said to Him, "I will follow you wherever you go." And Jesus said to him, "Foxes have holes, and birds of the air have nests; but the Son of man has nowhere to lay His head." To another He said, "Follow me." But he said, "Lord, let me first go and bury my father." But He said to him, "Leave the dead to bury their own dead; but as for you, go and proclaim the kingdom of God." Another said, "I will follow you, Lord; but let me first say farewell to those at my home." Jesus said to him, "No one who puts his hand to the plow and looks back is fit for the kingdom of God".

Links on Vatican Website:
The name of Jesus is the glory of preachers: From a sermon by Saint Bernardine of Siena, priest (Sermo 49, De glorioso Nomine Iesu Christi, cap 2: Opera omnia, 4. 505-506)

A faithful foster-parent and guardian: A reading from the sermons of St Bernardine of Siena (Sermon 2, On St Joseph)