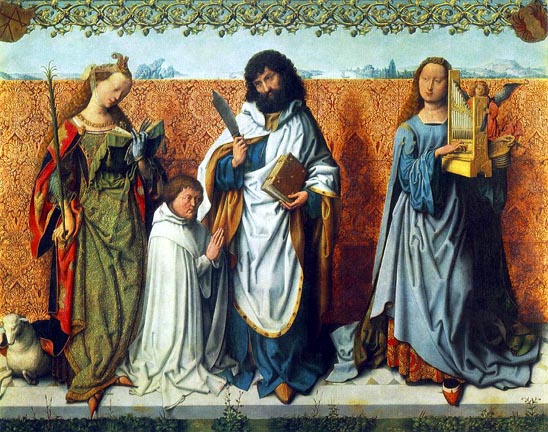 Bartholomew was from Cana in Galilee. Mentioned in the gospels as one of the twelve apostles, he is identified with Nathanael. His friend, the apostle Philip, brought him to Jesus. According to tradion, St. Bartholomew preached the Gospel in India and died there a martyr.

Collect:
Strengthen in us, O Lord, the faith,
by which the blessed Apostle Bartholomew
clung wholeheartedly to your Son,
and grant that through the help of his prayers
your Church may become for all the nations
the sacrament of salvation.
Through our Lord Jesus Christ, your Son,
who lives and reigns with you in the unity of the Holy Spirit,
one God, for ever and ever. +Amen.

First Reading:
Revelation 21: 9b-14
Then came one of the seven angels who had the seven bowls full of the seven last plagues, and spoke to me, saying, "Come, I will show you the Bride, the wife of the Lamb." And in the Spirit he carried me away to a great, high mountain, and showed me the holy city Jerusalem coming down out of heaven from God, having the glory of God, its radiance like a most rare jewel, like a jasper, clear as crystal. It had a great, high wall, with twelve gates, and at the gates twelve angels, and on the gates the names of the twelve tribes of the sons of Israel were inscribed; on the east three gates, on the north three gates, on the south three gates, and on the west three gates. And the wall of the city had twelve foundations, and on them the twelve names of the twelve apostles of the Lamb.

Gospel Reading:
John 1: 45-51
Philip found Nathanael, and said to him, "We have found him of whom Moses in the law and also the prophets wrote, Jesus of Nazareth, the son of Joseph." Nathana-el said to him, "Can anything good come out of Nazareth?" Philip said to him, "Come and see." Jesus saw Nathanael coming to him, and said of him, "Behold, an Israelite indeed, in whom is no guile!" Nathanael said to him, "How do you know me?" Jesus answered him, "Before Philip called you, when you were under the fig tree, I saw you." Nathanael answered him, "Rabbi, you are the Son of God! You are the King of Israel!" Jesus answered him, "Because I said to you, I saw you under the fig tree, do you believe? You shall see greater things than these." And he said to him, "Truly, truly, I say to you, you will see heaven opened, and the angels of God ascending and descending upon the Son of man."