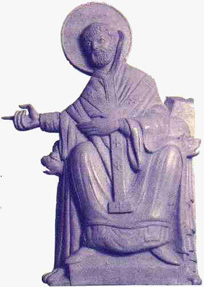 Statue at Mission of Saint Augustine to the English

First Archbishop of Canterbury, Apostle of the English. Early in life he become a monk in the famous monastery of St. Andrew erected by St. Gregory out of his own patrimony on the Cælian Hill. It was thus amid the religious intimacies of the Benedictine Rule and in the bracing atmosphere of a recent foundation that the character of the future missionary was formed. Chance is said to have furnished the opportunity for the enterprise which was destined to link his name for all time with that of his friend and patron, St. Gregory, as the "true beginner" of one of the most important Churches in Christendom and the medium by which the authority of the Roman See was established over men of the English-speaking race.

Some five years after his elevation to the Roman See (590) Gregory began to look about him for ways and means to carry out the dream of his earlier days. He naturally turned to the community he had ruled more than a decade of years before in the monastery on the Cælian Hill. Out of these he selected a company of about forty and designated Augustine, at that time Prior of St. Andrew's, to be their representative and spokesman. The appointment, as will appear later on, seems to have been of a somewhat indeterminate character; but from this time forward until his death in 604 it is to Augustine as "strengthened by the confirmation of the blessed Father Gregory (roboratus confirmatione beati patris Gregorii, Bede, H. E., I, xxv) that English, as distinguished from British, Christianity owes its primary inspiration.

Collect:
O God, who by the preaching
of the Bishop Saint Augustine of Canterbury
led the English peoples to the Gospel,
grant, we pray, that the fruits of his labors
may remain ever abundant in your Church.
Though our Lord Jesus Christ, your Son,
who lives and reigns with you in the unity of the Holy Spirit,
one God, for ever and ever. +Amen.

First Reading: 1 Thessalonians 2:2-8
Though we had already suffered and been shamefully treated at Philippi, as you know, we had courage in our God to declare to you the gospel of God in the face of great opposition. For our appeal does not spring from error or uncleanness, nor is it made with guile; but just as we have been approved by God to be entrusted with the gospel, so we speak, not to please men, but to please God who tests our hearts. For we never used either words of flattery, as you know, or a cloak for greed, as God is witness; nor did we seek glory from men, whether from you or from others, though we might have made demands as apostles of Christ. But we were gentle among you, like a nurse taking care of her children. So, being affectionately desirous of you, we were ready to share with you not only the gospel of God but also our own selves, because you had become very dear to us.

Gospel Reading: Matthew 9:35-38
Jesus went about all the cities and villages, teaching in their synagogues and preaching the gospel of the kingdom, and healing every disease and every infirmity. When He saw the crowds, He had compassion for them, because they were harassed and helpless, like sheep without a shepherd. Then He said to His disciples, "The harvest is plentiful, but the laborers are few; pray therefore the Lord of the harvest to send out laborers into His harvest."