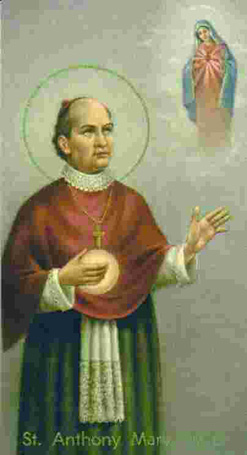 Saint Anthony was born in Sallent, Spain. He worked as a missionary preacher in Catalonia and the Canary Islands. As Archbishop of Santiago, Cuba, he fought for humane conditions for slaves. Later he became the confessor of the Queen of Spain, and led a revival of the faith in that country. In 1849 he founded the Missionary Sons of the Immaculate Heart of Mary ( the Claretians).

Collect:
O God, who for the evangelization of peoples
strengthened the Bishop Saint Anthony Mary Claret
with admirable charity and long-suffering,
grant, through his intercession,
that, seeking the things that are yours,
we may earnestly devote ourselves
to winning our brothers and sisters for Christ.
Who lives and reigns with you in the unity of the Holy Spirit,
one God, for ever and ever. +Amen.

First Reading: Isaiah 52: 7-10
How beautiful upon the mountains are the feet of him who brings good tidings, who publishes peace, who brings good tidings of good, who publishes salvation, who says to Zion, "Your God reigns." Hark, your watchmen lift up their voice, together they sing for joy; for eye to eye they see the return of the Lord to Zion. Break forth together into singing, you waste places of Jerusalem; for the Lord has comforted his people, he has redeemed Jerusalem. The Lord has bared his holy arm before the eyes of all the nations; and all the ends of the earth shall see the salvation of our God.

Gospel Reading: Mark 1: 14-20
Now after John was arrested, Jesus came into Galilee, preaching the gospel of God, and saying, "The time is fulfilled, and the kingdom of God is at hand; repent, and believe in the gospel."

And passing along by the Sea of Galilee, He saw Simon and Andrew the brother of Simon casting a net in the sea; for they were fishermen. And Jesus said to them, "Follow me and I will make you become fishers of men." And immediately they left their nets and followed Him. And going on a little farther, He saw James the son of Zebedee and John his brother, who were in their boat mending the nets. And immediately He called them; and they left their father Zebedee in the boat with the hired servants, and followed Him.