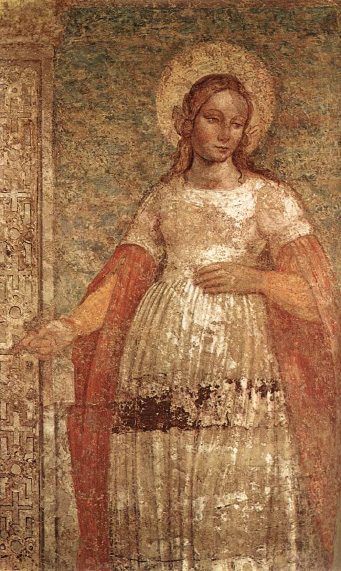 Agnes, the daughter of a noble Roman family who had become a Christian, was martyred at the age of twelve or thirteen during a persecution of Christians when she openly declared her belief. Her name is in the Roman Canon, and in the earliest Church calendar (354 AD), her feast was assigned to January 21, on which all accounts of her death agree. Agnes was martyred in 304, in the persecution of Diocletian, or possibly earlier, in a third century persecution. According to very early accounts, her enraged persecuters attempted to burn Agnes, and when this failed, they decapitated her.

Testimony to her courageous witness was given in early accounts. An account of her martyrdom was written by Saint Ambrose (340-387) in "De Virginibus", and Pope Damasus (ca. 304-384) extolled the heroism and virtue of the young girl, reportedly telling in a poem how she bravely faced fire, concerned only that her stripped body be covered by her long hair. The Pope also wrote an inscription to her on a marble slab, which can still be seen at the foot of the stairs leading to the sepulchre in the church built over her grave during the reign of Constantine (ca 275-337). According to the description of her martyrdom by Prudentius (348-413), as part of the persecution "the judge threatened to give over her virginity to a house of prostitution, and even executed this threat; but when a young man turned a lascivious look upon the virgin, he fell to the ground stricken with blindness...".

The church built over her tomb in the 4th Century, Sant'Agnese fuori le Mura ("Saint Agnes outside the walls), stands today -- on the Via Nomentana -- much the same as it was after it was remodeled by Pope Honorius (625-638). A mosaic in the apse of the church shows the young saint as a Byzantine empress, amid flames with a sword at her feet.

Another perhaps more famous church, Sant'Agnese in Agone, faces the Piazza Navona in Rome. Originally a 9th century oratory built over the the site of her martyrdom, a brothel in the arcades of the Circus of Domitian, also known as the Circus Agonalis, it was consecrated as a church by Pope Calixtus II on January 28, 1123. The present church was extensively remodeled in the 17th century by Rainaldi, according to plans by Borromini, and was influential in Baroque architecture. The Roman ruins of the brothel where Agnes was martyred are accessible from inside the church.

Since the early middle-ages, Saint Agnes is usually depicted holding a lamb (agnus - a pun on her name) as a symbol of her purity. At least since the 9th Century, each year on the Feast of Saint Agnes, two lambs are solemnly blessed at the church of Sant'Agnese fuori le Mura. From the wool of these lambs are made the pallium (a strip of white wool with black crosses woven into the fabric) given by the Pope to an archbishop as a sign of office.

Propers for the Feast of Saint Agnes

Collect:
Almighty ever-living God,
who choose what is weak in the world to confound the strong,
mercifully grant,
that we, who celebrate the heavenly birthday of your Martyr Saint Agnes,
may follow her constancy in the faith.
Through our Lord Jesus Christ, your Son,
who lives and reigns with you in the unity of the Holy Spirit,
one God, for ever and ever. +Amen.

First Reading: 1 Corinthians 1:26-31
For since, in the wisdom of God, the world did not know God through wisdom, it pleased God through the folly of what we preach to save those who believe. For Jews demand signs and Greeks seek wisdom, but we preach Christ crucified, a stumbling block to Jews and folly to Gentiles, but to those who are called, both Jews and Greeks, Christ the power of God and the wisdom of God. For the foolishness of God is wiser than men, and the weakness of God is stronger than men.

For consider your call, brethren; not many of you were wise according to worldly standards, not many were powerful, not many were of noble birth; but God chose what is foolish in the world to shame the wise, God chose what is weak in the world to shame the strong, God chose what is low and despised in the world, even things that are not, to bring to nothing things that are, so that no human being might boast in the presence of God. He is the source of your life in Christ Jesus, whom God made our wisdom, our righteousness and sanctification and redemption; therefore, as it is written, "Let him who boasts, boast of the Lord."

Gospel Reading: Matthew 13:44-46
"The kingdom of heaven is like treasure hidden in a field, which a man found and covered up; then in his joy he goes and sells all that he has and buys that field.

"Again, the kingdom of heaven is like a merchant in search of fine pearls, who, on finding one pearl of great value, went and sold all that he had and bought it.