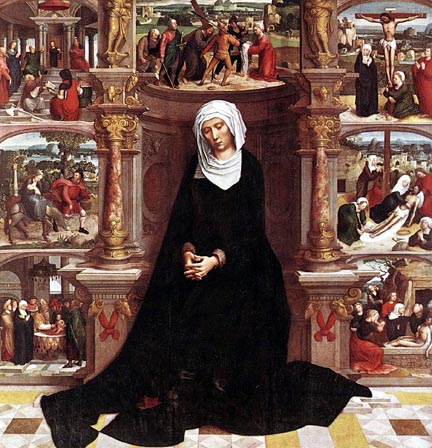 The Virgin Mary, who believed in the word of the Lord, did not lose her
faith in God when she saw her Son rejected, abused and crucified. Rather she
remained beside Jesus, suffering and praying, until the end. And she saw the
radiant dawn of His Resurrection. Let us learn from her to witness to our
faith with a life of humble service, ready to personally pay the price of
staying faithful to the Gospel of love and truth, certain that nothing that
we do will be lost.
— Pope Benedict XVI, Angelus - September 13, 2009

History of the Devotion to Our Lady of Sorrows

The seven founders of the Servite Order, in 1239, five years after they established themselves on Monte Senario, took up the sorrows of Mary, standing under the Cross, as the principal devotion of their order. The feast originate by a provincial synod of Cologne (1413) to expiate the crimes of the iconoclast Hussites; it was to be kept on the Friday after the third Sunday after Easter under the title: "Commemoratio angustix et doloris B. Marix V". Its object was exclusively the sorrow of Mary during the Crucifixion and Death of Christ. Before the sixteenth century this feast was limited to the dioceses of North Germany, Scandinavia, and Scotland. Being termed "Compassio" or "Transfixio", Commendatio, Lamentatio B.M.V.", it was kept at a great variety of dates, mostly during Eastertide or shortly after Pentecost, or on some fixed day of a month. Dreves and Blume (Analecta hymnica) have published a large number of rhythmical offices, sequences and hymns for the feast of the Compassion, which show that from the end of the fifteenth century in several dioceses the scope of this feast was widened to commemorate either five dolours (sorrows), from the imprisonment to the burial of Christ, or seven dolours, extending over the entire life of Mary.

Towards the end of the end of the sixteenth century the feast spread over part of the south of Europe; in 1506 it was granted to the nuns of the Annunciation under the title "Spasmi B.M.V.", Monday after Passion Sunday; in 1600 to the Servite nuns of Valencia, "B.M.V. sub pede Crucis", Friday before Palm Sunday. After 1600 it became popular in France and was termed "Dominx N. de Pietate", Friday before Palm Sunday. To this latter date the feast was assigned for the whole German Empire (1674). By a Decree of April 22, 1727, Benedict XIII extended it to the entire Latin Church, under the title "Septem dolorum B.M.V.", although the Office and Mass retain the original character of the feast, the Compassion of Mary at the foot of the Cross. At both Mass and Office the "Stabat Mater" of Giacopone da Todi (1306) is sung (see words in Latin and English below).

A second feast was granted to the Servites, June 9 and September 15, 1668. Its object of the seven dolours of Mary (according to the responsories of Matins).

* at the prophecy of Simeon;
* at the flight into Egypt;
* having lost the Holy Child at Jerusalem;
* meeting Jesus on his way to Calvary;
* standing at the foot of the Cross;
* Jesus being taken from the Cross;
* at the burial of Christ.

This feast was extended to Spain (1735); to Tuscany (1807). After his return from his exile in France Pius VII extended the feast to the Latin Church (September 18, 1814). A feast, "B.M.V. de pietate", with a beautiful medieval office, is kept in honor of the sorrowful mother at Goa in India and Braga in Portugal, on the third Sunday of October; in the ecclesiastical province of Rio de Janeiro in Brazil, last Sunday of May, etc. A special form of devotion is practiced in Spanish-speaking countries under the term of "N.S. de la Soledad", to commemorate the solitude of Mary on Holy Saturday. Its origin goes back to Queen Juana, lamenting the early death of her husband Philip I, King of Spain (1506).

Collect:
O God, who willed
that, when your Son was lifted high on the Cross,
his Mother should stand close by and share his suffering,
grant that your Church,
participating with the Virgin Mary in the Passion of Christ,
may merit a share in his Resurrection.
Who lives and reigns with you in the unity of the Holy Spirit,
one God, for ever and ever. +Amen.

First Reading: Hebrews 5:7-9
In the days of His flesh, Jesus offered up prayers and supplications, with loud cries and tears, to Him who was able to save Him from death, and He was heard for His godly fear. Although He was a Son, He learned obedience through what He suffered; and being made perfect He became the source of eternal salvation to all who obey Him.

Alternative Gospel Reading: Luke 2:33-35
Jesus' father and mother marveled at what was said about Him; and Simeon blessed them and said to Mary His mother, "Behold, this child is set for the fall and rising of many in Israel, and for a sign that is spoken against (and a sword will pierce through your own soul also), that thoughts out of many hearts may be revealed." 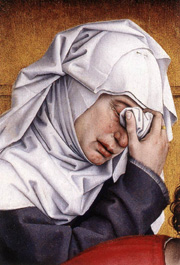 At the cross her station keeping
stood the mournful Mother weeping,
close to Jesus to the last.

Through her heart, His sorrow sharing,
all His bitter anguish bearing
now at lenght the sword had passed.

Oh, how sad and sore distressed
was that Mother highly blessed,
of the sole-begotten One!

Christ above in torment hangs,
she beneath beholds the pangs
of her dying, glorious Son.

Is there one who would not weep,
'whelmed in miseries so deep,
Christ's dear Mother to behold?

Can the human heart refrain
from partaking in her pain,
in that Mother's pain untold?

Bruised, derided, cursed, defiled,
she beheld her tender Child
All with scourges rent.

For the sins of His own nation,
saw Him hang in desolation,
Till His spirit forth He sent.

O sweet Mother! fount of love!
Touch my spirit from above,
make my heart with thine accord.

Make me feel as thou hast felt;
make my soul to glow and melt
with the love of Christ, my Lord.

Holy Mother! pierce me through,
in my heart each wound renew
of my Savior crucified.

Let me share with thee His pain,
who for all our sins was slain,
who for me in torments died.

Let me mingle tears with thee,
mourning Him who mourned for me,
all the days that I may live.

Virgin of all virgins blest!,
Listen to my fond request:
let me share thy grief divine;

Let me, to my latest breath,
in my body bear the death
of that dying Son of thine.

Wounded with His every wound,
steep my soul till it hath swooned,
in His very Blood away;

Be to me, O Virgin, nigh,
lest in flames I burn and die,
in His awful Judgment Day.

Christ, when Thou shalt call me hence,
by Thy Mother my defense,
by Thy Cross my victory;

While my body here decays,
may my soul Thy goodness praise,
safe in paradise with Thee. Amen.