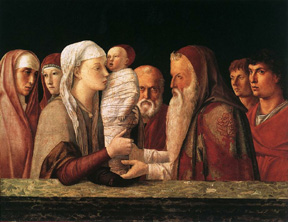 Nunc Dimmitis
"Lord, now lettest thou thy servant depart in peace, according to thy word;
for mine eyes have seen thy salvation which thou hast prepared in the presence of all peoples,
a light for revelation to the Gentiles, and for glory to thy people Israel."

120. Until 1969, the ancient feast of the presentation of Our Lord, which is of Oriental origin, was known in the West as the feast of the Purification of Our Lady, and closed the Christmas season, forty days after the Lord's birth. This feast has for long been associated with many popular devotional exercises. The faithful:

121. Popular piety is sensitive to the providential and mysterious event that is the Conception and birth of new life. Christian mothers can easily identify with the maternity of Our Lady, the most pure Mother of the Head of the mystical Body - notwithstanding the notable differences in the Virgin's unique Conception and birth. These too are mothers in God's plan and are about to give birth to future members of the Church. From this intuition and a certain mimesis of the purification of Our Lady, the rite of purification after birth was developed, some of whose elements reflect negatively on birth.

The revised Rituale Romanum provides for the blessing of women both before and after birth, this latter only in cases where the mother could not participate at the baptism of her child.

It is a highly desirable thing for mothers and married couples to ask for these blessings which should be given in accord with the Church's prayer: in a communion of faith and charity in prayer so that pregnancy can be brought to term without difficulty (blessing before birth), and to give thanks to God for the gift of a child (blessing after birth).

122. In some local Churches, certain elements taken from the Gospel account of the Presentation of the Lord (Lk 2, 22-40), such as the obedience of Joseph and Mary to the Law of the Lord, the poverty of the holy spouses, the virginity of Our Lady, mark out the February 2 as a special feast for those at the service of the brethren in the various forms of consecrated life.

123. The feast of February 2 still retains a popular character. It is necessary, however, that such should reflect the true Christian significance of the feast. It would not be proper for popular piety in its celebration of this feast to overlook its Christological significance and concentrate exclusively on its Marian aspects. The fact that this feast should be "considered [...] a joint memorial of Son and Mother" would not support such an inversion. The candles kept by the faithful in their homes should be seen as a sign of Christ "the light of the world" and an expression of faith.

Collect:
Almighty ever-living God,
we humbly implore your majesty
that, just as your Only Begotten Son
was presented on this day in the Temple
in the substance of our flesh,
so, by your grace,
we may be presented to you with minds made pure.
Through our Lord Jesus Christ, your Son,
who lives and reigns with you in the unity of the Holy Spirit,
one God, for ever and ever. +Amen.

First Reading: Malachi 3:1-4
"Behold, I send My messenger to prepare the way before Me, and the Lord whom you seek will suddenly come to His temple; the messenger of the covenant in whom you delight, behold, He is coming, says the Lord of hosts. But who can endure the day of His coming, and who can stand when He appears?

"For He is like a refiner's fire and like fullers' soap; He will sit as a refiner and purifier of silver, and He will purify the sons of Levi and refine them like gold and silver, till they present right offerings to the Lord. Then the offering of Judah and Jerusalem will be pleasing to the Lord as in the days of old and as in former years.

Second Reading: Hebrews 2:14-18
Since therefore the children share in flesh and blood, He Himself likewise partook of the same nature, that through death He might destroy him who has the power of death, that is, the devil, and deliver all those who through fear of death were subject to lifelong bondage. For surely it is not with angels that He is concerned but with the descendants of Abraham. Therefore He had to be made like His brethren in every respect, so that He might become a merciful and faithful high priest in the service of God, to make expiation for the sins of the people. For because He Himself has suffered and been tempted, He is able to help those who are tempted.

Gospel Reading: Luke 2:22-40 [or Short form 2:22-32 - omit brackets]
And when the time came for their purification according to the law of Moses, they brought Him up to Jerusalem to present Him to the Lord (as it is written in the law of the Lord, "Every male that opens the womb shall be called holy to the Lord") and to offer a sacrifice according to what is said in the law of the Lord, "a pair of turtledoves, or two young pigeons."

Now there was a man in Jerusalem, whose name was Simeon, and this man was righteous and devout, looking for the consolation of Israel, and the Holy Spirit was upon him. And it had been revealed to him by the Holy Spirit that he should not see death before he had seen the Lord's Christ. And inspired by the Spirit he came into the temple; and when the parents brought in the child Jesus, to do for Him according to the custom of the law, he took Him up in his arms and blessed God and said, "Lord, now lettest thou thy servant depart in peace, according to thy word; for mine eyes have seen thy salvation which thou hast prepared in the presence of all peoples, a light for revelation to the Gentiles, and for glory to thy people Israel."

[And His father and His mother marveled at what was said about Him; and Simeon blessed them and said to Mary His mother, "Behold, this Child is set for the fall and rising of many in Israel, and for a sign that is spoken against (and a sword will pierce through your own soul also), that thoughts out of many hearts may be revealed."

And there was a prophetess, Anna, the daughter of Phanu-el, of the tribe of Asher; she was of a great age, having lived with her husband seven years from her virginity, and as a widow till she was eighty-four. She did not depart from the temple, worshiping with fasting and prayer night and day. And coming up at that very hour she gave thanks to God, and spoke of Him to all who were looking for the redemption of Jerusalem.

And when they had performed everything according to the law of the Lord, they returned into Galilee, to their own city, Nazareth. And the Child grew and became strong, filled with wisdom; and the favor of God was upon Him.]

Children know how to play "bread on the water". Crumbs of bread tossed on the corner of small lake attracts fish. If the fish are fed repeatedly, the crumbs might eventually attract a big fish, suitable for the fly rod. From the point of view of the large fish that are eventually caught, the game of "bread on the water" turns out to be a terrible trick, not a game of charity. After all, they end up in the frying pan.

Sometimes "sacrificial giving" is not always what it appears to be. Occasionally, self-interest motivates external acts of charity. Hence, corporate sponsorship of civic events and the donation of sums of money to charities may only be "bread on the water," that is, forms of advertising or means to secure the goodwill of the community. "Bread on the water" donations may not be wrong at all or even offensive. The donations are often praiseworthy as a mutually beneficial business transaction. But strictly speaking, they are not acts of Christian charity.

The motives of giving and generosity are often mixed and difficult to untangle. A teacher may treat his students with candy, for example. But are the treats primarily acts of kindness or means of manipulating the affection of the children? Motivations are usually clarified and purified when an act of charity is put to the test. When the gift is accepted without an apparent payback, how does the benefactor respond?

Symbolic of their charity, Mary and Joseph present the child Jesus to the Lord in the Temple. As it is written in the law of the Lord, "Every male that opens the womb shall be called holy to the Lord." A pair of turtledoves, or two young pigeons are sacrificed to express Mary and Joseph's obedience to the law. The prophet Simeon, by the grace of God, recognizes the child as the Messiah. Inspired by the Holy Spirit, he prophesies that the child will be the instrument of Israel's salvation. He adds that the child will be a "sign of contradiction" and promises, ominously, that "a sword [of sorrow] will pierce" the heart of Mary.

When Mary ritually presented her newborn Son in the Temple in Jerusalem, she did so in accordance with the Mosaic law. Aside from the turtle doves, there was no real cost to this symbolic act of obedience and charity. But the presentation of the Lord, certainly prefigured her sacrificial gift at the foot of the Cross. At the foot of the Cross, the sorrowful Mother reveals at once the quiet dignity of her love and the true sacrificial character of her charity. Her ritual offering of her child was accepted by God on Calvary. For Mary, the presentation of the Lord, offered in obedience to the Father, did not have a payback. It was an expression of love, a love that was tested and confirmed by the Cross.

The Cross was Mary's test of charity symbolically expressed during the Presentation of the Lord when Jesus was a child. She passed the test because her love was pure, not "bread on the water." Christian charity is disinterested love, love for the sake of God. Motivated by the love of God and following the example of Mary and her divine Son, Christians must learn to give of themselves without counting the cost or measuring the benefits.