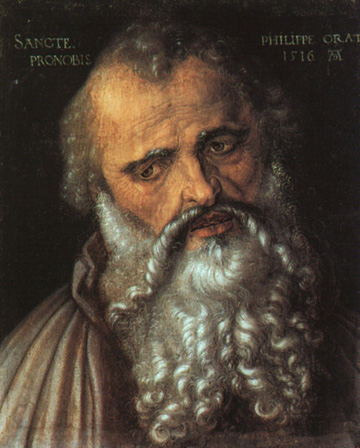 The Lord chose these holy men for their unfeigned love, and gave them eternal glory. Alleluia.

O God, who gladden us each year
with the feast day of the Apostles Philip and James,
grant us, through their prayers,
a share in the Passion and Resurrection
of your Only Begotten Son,
so that we may merit to behold you for eternity.
Through our Lord Jesus Christ, your Son,
who lives and reigns with you in the unity of the Holy Spirit,
one God, for ever and ever. +Amen.

Now I would remind you, brethen, in what terms I preached to you the gospel, which you received, in which you stand, by which you are saved, if you hold it fast -- unless you believed in vain.

Jesus said to Thomas, "I am the way, and truth, and the life; no one comes to the Father, but by Me. If you had known Me, you would have known My Father also; henceforth you know Him and have seen Him."

Other web sites are welcome to establish links to www.wf-f.org or to individual pages within our site.

Back to top -- Home -- Back to Prayers & Devotions