The Observance of Lent - Part I
Pre-Lenten Days

From the Family Sourcebook for Lent and Easter 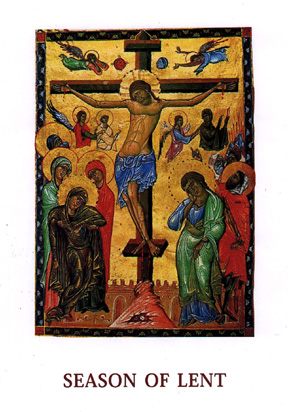 The penitential season of Lent is the period of forty week-days beginning on Ash Wednesday. It is a season of the Church year that commemorates the forty days Jesus fasted and prayed in the wilderness before He began His public ministry of preaching for repentance. Six Sundays are within the season; the last, Passion Sunday, marks the beginning of Holy Week. Holy Thursday begins the Triduum (three days) before Easter day, which includes Good Friday and Holy Saturday.

The Church has devoted a period of time to prayer and fasting as a preparation for the liturgical comemmoration of the Passion of Christ and the celebrations of the feast of the Resurrection, Easter Day, since very early times. In 604 Pope Gregory I defined Lent as "The spiritual tithing of the year", a time of solemn spiritual and physical preparation for our own acceptance of salvation through Christ's sacrifice. (Ordinary tithing meant to give a tenth part ­ a tithe ­ of one's goods to God. Lent's forty days represents about a tenth of the year.)

The word "Lent" comes from the Anglo-Saxon word "lencten", referring to the lengthening of days in the Spring. Lent, of course, is an English word. In Latin, still the official language of the the Catholic Church, the entire season is known as Quadrigesima, or "forty".

The season of Lent calls Christians to imitate the forty days of prayer and fasting of Jesus. The period of forty days is significant. When God punished the sinfulness of mankind by the Flood, the rain lasted forty days and forty nights. Moses led the Hebrew people out of bondage in Egypt, but they wandered forty years in the desert before reaching the promised land. Elijah fasted and sought God's will on Mount Horeb for forty days. Jonah prophesied the destruction of Nineveh in forty days.

Pre-Lenten Season
In the Eastern Churches the penitential season before Easter begins before the forty days, and eventually the Roman Church also anticipated the season for several weeks before the actual beginning of Lent.

Prior to the Second Vatican Council, the pre-Lenten penitential season began on the Sunday three weeks before the beginning of Lent, called Septuagesima. The word Septuagesima (seventieth) was supposed to be a reminder of the seventy years of the Babylonian captivity of the Jewish people, and thus of our captivity in sin, although this Sunday was actually only sixty-three days before Easter. The succeeding pre-Lenten Sundays were called Sexagesima and Quinquagesima. Just as in Lent, violet vestments were worn and the Alleluia was omitted from Mass.

The liturgical changes initiated by the Council removed this anticipated pre-Lenten penitential season, however, and the Church returned to the earlier practice of beginning Lent on Ash Wednesday. The Sundays between Epiphany and the beginning of Lent are now in the liturgical season called Ordinary Time.

Movable Feasts
The date of Easter is the first Sunday after the first full moon following the vernal (spring) equinox. So, unlike Christmas, which is celebrated on the same day each year, Easter and feasts and celebrations of the Church year related to Easter are called "movable feasts". The movable feasts include the Ascension (forty days after Easter), Pentecost (fifty days after Easter), and Trinity Sunday, the first Sunday after Pentecost. (Christ the King, the last Sunday of the liturgical year, or the Sunday before Advent, is also a movable feast, although its date is not determined by the date of Easter, but by the first Sunday of Advent, which is the Sunday nearest the Feast of St. Andrew, November 30.)

Carnival ­ Shrove Tuesday - Mardi Gras
Carnival is from the Latin Carnevale or "farewell to meat", and it is a time of joyful feasting and fun. The practice of celebrating carnival probably began in ancient times when the Sunday a week before the beginning of Lent was called Dominica Carnevala, or "farewell to meat Sunday" -- referring to the Lenten fast from meat and animal products. (For more information on the Catholic practice of fasting see Ash Wednesday page, and Fast and Abstinence page.)

The official day of "farewell" is Mardi Gras, French for "Fat Tuesday". The day was also called "Butter Tuesday", because the last of the animal products had to be used up ­ sometimes in fried pancakes. It is also known as Shrove Tuesday, which may refer to the diet being deprived or "shriven" of meat; or possibly that after the customary confession in preparation for Lent, one is "shriven" of sin. The famous celebration of Mardi Gras in New Orleans has become largely a secular festival, its religious meaning having been virtually obliterated in the revelries. And the word "carnival" has long since lost its religious significance.

Celebrating Carnival with family, friends and parish community helps children and adults to understand and appreciate "that wonderful, eternal rhythm of high and low tide that makes up the year of the Church: times of waiting alternate with times of fulfillment, the lean weeks of Lent with the feasts of Easter and Pentecost, times of mourning with seasons of rejoicing", as Maria von Trapp said, in Around the Year with the Trapp Family (p. 85). The Carnival season has been a time of "blowing off steam", of entertaining guests in the spirit of Christian hospitality and generosity, and of partaking of rich food and drinks ­ and sometimes of excess, as the Mardi Gras celebration in New Orleans vividly displays.

One of the reasons for the development of the Carnival season and the emphasis on revelry and merry-making was the very rigorous practice of Lenten fasting during the Middle Ages and beyond. During Carnival, housewives of the past rid their pantries of all butter, lard, eggs, bacon, cream and cheese in preparation for the Lenten fast. From the Middle Ages until the late Renaissance, eating all animal products except fish (which were considered bloodless) was forbidden.

The custom of eating pancakes on Shrove Tuesday is still maintained in many places. (Pancakes require many eggs and much milk and butter in their preparation.) To this day there is an annual pancake race on Shrove Tuesday between the village of Olney, England and the small town of Liberal, Kansas. The outcome of this international contest, which originated in the story of a "war-bride" who was a native of Olney where the traditional pancake race originated several hundred years ago, usually appears in the national news on Tuesday before the beginning of Lent.

MESSAGE OF HIS HOLINESS POPE BENEDICT XVI FOR LENT 2011, “You were buried with him in baptism, in which you were also raised with him.” (cf. Col 2: 12)